Surviving the future in the aftermath of the market economy

The following is an excerpt from "Surviving the Future: Culture, Carnival and Capital in the Aftermath of the Market Economy" by David Fleming and Shaun Chamberlin, published by Chelsea Green Publishing.

The societies of the future will be essentially local. And here is why — size has a crucial influence on the nature of an object. Consider the geometry: the two circles below are identical except that one is larger than the other. Are there any differences between them other than that simple difference in size? 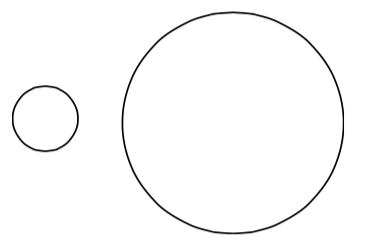 Yes. Their proportions differ in a fundamental way: Relative to their respective areas, the circumference (edge) of the large circle is less than that of the small one. The larger a circle, the smaller its edge relative to its area. Large shapes (and systems) have a low edge ratio, small ones have a high edge ratio.

This rule of geometry can have some advantages for large organisms: for instance, having a small surface area (relative to its size) helps a large animal to conserve heat, enabling it to have the slower metabolic rate associated with long life.

And there are other advantages such as improved powers to defend itself (but it may also be a more tempting target), the ability to forage over a large area (but it needs more food), a body capable of supporting a heavy brain and so forth. And for human societies, too, there are advantages of scale — a bigger pool of talent and better orchestras, for instance — so scale is not a matter of small-is-always-best. 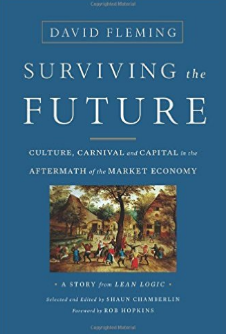 However, the advantages that large scale does enjoy come at a high cost. The key to this is that a large system has a relatively short boundary (border, edge, surface) across which it can obtain its needs. Large animals and societies have to go to a lot of trouble to import sufficient nutrients and energy which then have to be distributed over larger distances in their bodies, with waste having to travel all the way back to the boundary.

No, small is not always best; it is a matter of being the right size. But there are good reasons for a strong presumption — a reliable default position — in favor of small.

The problem with large scale is that with each advance in size there is a necessary increase in complication. Large animals — whose ratio between volume and surface-area means that the absorption of food and oxygen is a problem — have to make up for this with ingenious devices such as lungs, and the velvety textures which confer an enormous surface area on their guts. As biologist J.B.S. Haldane writes in his classic essay "On Being the Right Size,"

Applying this to settlements and economies, the inevitable complications of largeness lead to three things:

1. A loss of elegance, as large infrastructures (the intermediate economy) have to be maintained in order to enable the simple act of living;

2. A loss of judgment, as inflexible standardized solutions and ideologies (aka rationalism) destroy the local detail — that living part of the urban ecology on which the rest depends; and

3. A loss of presence and direct participation, as people surrender the power to build the institutions they want, which would enable lives that make sense to them. The system as a whole sacrifices the intelligence it needs: it loses its minds.

And there is a fourth problem too. Material waste tends to be lost from the system rather than recycled, as it runs up against a specific difficulty facing large-scale systems:

Work can be divided into two essential kinds: mixing and sorting (unmixing).

There are exceptions subject to circumstances, but as a rule it can be affirmed that mixing is most efficiently done on the large scale, while sorting is most efficiently done on the small scale. For example, to mix (shuffle) a pack of cards, it is necessary to collect all the cards together — this is done quickly on the large scale, with little attention to detail. But to sort it into tricks and patterns you need step-by-step deliberation on the small scale.

The story starts in 17th century Europe, whose growing population had a fuel problem.

Economies of scale when mixing apply in (for instance) making wine and beer, glasses, pots or nails, weaving cloth, baking bread, printing newsletters. The geometry of scale can work in favor of bigness: the larger the containers you use, the less glass or metal you need to store a given amount of liquid. In order to keep itself alive, our community has to do a great deal of mixing, and there is a case for doing some of it centrally, rather than on the scale of individual households.

But then there is the sorting out to do. From each of these processes, there is an end-product and there is also leftover waste such as: empty bottles, broken pots, bent nails, urine, feces and unwanted paper. If a circular flow of materials is to be maintained, that lot has to be sorted, and this is where small scale comes into its own. Generally speaking, the sorting of waste on a small scale has these properties (relative to sorting at large scale):

In straitened times, without vast energy surpluses, sorting on the small scale is not a matter of preference: it is a requirement of logic. Which is all very well, but it does raise the question as to why — if small scale is so logical — our societies, given half a chance, seem to have a distinct tendency towards growth, intensification, swelling intermediate economies and all the rest? Let’s take an example.

The story starts in 17th century Europe, whose growing population had a fuel problem. A lot of energy was needed for domestic heating (this was the "Little Ice Age"), for cooking, for industrial uses: forges, lime-burning, salt-boiling, dyeing, brewing, soap, candles, bricks, gunpowder and the metal industries.

Although wood was the obvious fuel, that option was closing, as forests were cut down for firewood, ships and building, and cleared for agriculture. The only alternative was to elaborate,  to intensify — and the sequence of elaborations that had to take place required a large amount of extra work from labor and land alike:

Stage 1. Firewood — the starting point — has decisive advantages. It is widely distributed, easy to obtain by gathering or felling, easy to transport and clean; it has tolerable fumes and it is renewable. It is also easy to use in industrial processes such as smelting and soap-making.

Stage 2. Failing the ideal option of wood, the next best choice is coal from shallow mines. This is accessible, and it had been in use for many centuries, but coal’s disadvantages are severe. It lies in concentrated deposits, usually far from where it is needed; it has to be formally bought, rather than informally gathered; it is heavy, and transport over roads in 18th century conditions was a nightmare of mud and ruts deep enough to drown in; its fumes are toxic and dirty; and its use for purposes such as smelting presents technical problems which were not to be solved for many years.

Stage 3. An even less attractive option, but — in due course — an unavoidable one, is coal from deep mines. Now the problems really start. Coal mines flood unless they are continually pumped, and this was for practical purposes impossible with the technology of the day: horsewhims (windlasses) could barely lift the long chains of buckets when they were full of water.

This was a society with its back to the wall; a large and complicated productive system had to be invented, built and run in order to produce the massive quantities of intermediate goods and processes.

The pressure to find a solution led on to the invention of steam power — which in turn required the invention of ways of making parts with an accuracy, durability and complexity that had never been imagined — and then onwards through a sequence of trial and (spectacular) error to metal-bashing, new processes, industrial chemistry, the shock of very-large-scale engineering and rapidly growing industrial populations.

Stage 4. Once deep mines became viable, it was necessary to establish a comprehensive system of transport. With a relentless step-by-step logic, the early Industrial Revolution, which had a non-negotiable need for coal, was drawn into building an immensely elaborate transport structure — twice over, with the canals promptly being made obsolete by the even more ambitious network of railways.

And the result of all this was an extraordinary increase in the average person’s workload: so many intermediate tasks (regrettable necessities) had to be accomplished that many of the final goods and services that were desperately wanted by so many people were never produced at all.

Certainly, there was economic and social inequality, too, but the more fundamental problem was that of how to achieve an adequate supply of final goods on any terms. This was a society with its back to the wall; a large and complicated productive system had to be invented, built and run in order to produce the massive quantities of intermediate goods and processes needed for the fuel, food, shelter and clothing that people actually wanted.

There is a limit to an economy’s ability to do more and more work simply in order to fulfill its needs.

Far from being a matter of choice, large-scale development — with all its hefty drawbacks — was foisted onto society as a consequence of exhausting its preferred choice of energy. For the people at the start of the process, this astonishing elaboration and total transformation of society in response to a simple shortage of firewood would have been unimaginable. But the logic led on relentlessly to . . .

. . . Stage 5 — even larger urban workforces, the break-up of small communities and face-to-face societies, the concentration of populations and of specialist industries in particular places — and onwards to the mature transport-dependent market economy, whose energy problem has reached a climax which will turn out to be much more intense and dangerous than the firewood shortage which started the whole thing off in the first place.

This is not a story that can continue forever. There is a limit to an economy’s ability to do more and more work simply in order to fulfill its needs — that is, to keep going, to carry out the increasing workload required just to provide for its own subsistence. During the English Industrial Revolution that limit was tested: for many people, it was overstepped — as Richard Wilkinson explains:

The amount of work necessary to gain subsistence can — if all else fails — be allowed to increase until it begins to approach the maximum people are capable of doing. Beyond this the system is no longer viable. Undoubtedly this point was reached for a significant proportion of the English population during the Industrial Revolution: the workload rose to the limits of human endurance. 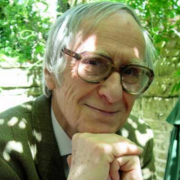 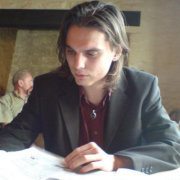 See all by David Fleming