The teetering Eurozone and the unstable global economy are the biggest issues facing the world today, said business, academic and governmental leaders this week.

Following close behind, however, was resource scarcity, which ranked No. 4 among the top 10 global trends leaders named in the Global Agenda Survey, run by the World Economic Forum Network of Global Agenda Councils, and released Tuesday. Although the list was mostly dominated by political and economic concerns, some key sustainability issues were at the top of leaders’ minds.

Climate change also made it into the top 10, although the timing of the survey – which was taken before Hurricane Sandy hit New York City – may have kept climate issues from climbing higher on the list, which captures the opinions, insights and expertise of the 900 global experts here in Dubai for the Summit on the Global Agenda.

Resource scarcity is the most controversial topic.

As the embedded excerpt above shows (you can also view it directly on the website), resource scarcity is both one of the most underestimated and overestimated issues today.

These two seemingly paradoxical observations suggest two messages. The first is that resource scarcity in conjunction with an ever-growing population is still proving to be a major unsolved global challenge that should require more attention. Second, there is another group who may still be skeptical of this threat, perhaps in line with climate change skeptics, who continue to make up a significant part of the population in several countries, namely the U.S., Britain and Japan.

Following the trend from Rio+20, NGOs and the private sector are most worried about resource scarcity. The fact that respondents overwhelmingly identified the top consequence of such scarcity as “social and/or political unrest” underlies the assumption that resource scarcity will primarily hit the developing nations.

However, it is important to note that many of these top consequences have business implications, especially both upstream and downstream of a company’s value chain. Managing this risk, according to Dominic Waughray, WEF Head of Environmental Initiatives, is one of the key aspects of resilience dynamism, which is the theme of Davos 2013.

Climate change has dropped to No. 9, and is very gender-specific

Although climate change only dropped a single notch overall, when respondents are narrowed to business stakeholders, the decline is more dramatic. Business leaders ranked climate change No. 12 this year, down from No. 8, signaling a shift in priorities most likely due to the economic and financial crisis.

Nine out of ten respondents who named climate/nNatural disasters a top concern were men. The gender bias of the Global Agenda Councils, and this event in general, has been discussed since Day One, when Jan Eliasson, Deputy Director General of the United Nations, stated, “women’s empowerment will be one of the most important forces facing the 21st century”. By coincidence, a climate change conference held simultaneously (unrelated to the WEF Summit) here in Dubai, called for women “to lead the climate fight.” Whether this gender bias in the attention being paid to climate change and natural disasters is just a statistical or sampling phenomenon, or actually significant, and more importantly how, perhaps begs further investigation.

It is also critical to note that this survey was taken before Hurricane Sandy, which I believe would significant raise the priority of this issue, especially among the government stakeholders. It will be interesting to see whether this is significant in the updates to the survey from the data collected during the summit. 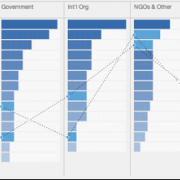 While other stakeholder groups ranked the resource scarcity and climate change similarly, there was a great disparity between the two among business stakeholders. This was slightly surprising, as often the two are very interlinked, even in strategies that businesses employ to tackle environmental sustainability issues. Both directly affect businesses, and often one causes the other, as we saw this past summer in the rise of corn prices due to the heat wave and drought in the US Midwest.

There are few explanations for this gap. One is that resource scarcity is an issue that a business can tackle with strategy, even proactively, and also is more directly linked to core business practices, such as supply chain management. However, climate change/natural disasters is an issue that’s regional and global, affecting many businesses and communities simultaneously, and is out of control of the firm. Another explanation is a broader shift in thinking towards the need to build resilience into operations and infrastructure.

What can we expect at Davos?

A senior WEF associate who managed the Global Agenda Council on Climate Change also noticed a trend among her council members who previously prioritized financial concerns. She saw they were starting to place aspects of adaptation and resilience on the agenda. The Global Risks Report, published in January 2012, identifies “failure of climate change adaptation” as one of the top environmental risks. This momentum towards adaptation and resilience will certainly continue at\ Davos 2013. 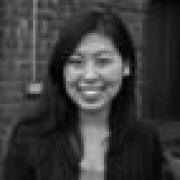 See all by Sunmin Kim