In business school, the classmates who stood out fell into three categories: investors; combiners; and entrepreneurs. Visionary investors could see what capital owners needed and when they needed it. Visionary combiners could see the efficiencies possible through unexpected mergers and acquisitions. And visionary entrepreneurs could see a market earlier than anyone else, and create a new category to go after it.

To thrive today, CEOs need all three skills plus one more: They need to give purpose to their employees and to their business model.

My friend, legendary agency founder Roy Spence, wrote the book on purpose a few years back. His core concept is still spot on: "It’s not what you sell, it’s what you stand for." At the time, purpose was found within the category, such as BMW’s focus on creating the "ultimate driving machine." But today, a visionary purpose is increasingly tied to solving an intertwined pair of global problems.

Today, best in class means best for the planet and the people as well as best for profit.

In other words, it’s no longer enough to be best in class. Today, best in class means best for the planet and the people as well as best for profit. Tesla illustrates this ideal perfectly. Volkswagen illustrates the opposite. Walmart is executing what may be perhaps the most dramatic 180-degree turn, from a company that accelerated social and environmental depletion to one that champions sustainability and employee engagement. Walmart is boosting wages and exiting the supercenter footprint that gave it such unparalleled economies of scale.

For CEOs, two issues are causing the biggest consternation as we move into 2017: climate change; and sustainable, long-term growth. Just last year, CEOs from more than 400 of the world’s largest companies urged world leaders to adopt aggressive climate targets in the Paris Conference of Parties. Two months later, Larry Fink, CEO of BlackRock, the world’s largest asset manager, wrote a chairman’s letter asking every Fortune 500 CEO to send him a strategy for sustainable, long-term growth.

Not too many CEOs got A’s on Fink’s homework assignment. Understandably, CEOs are finding it impossible to chart a long-term growth strategy when all the incentives in the system are pointing in the opposite direction. Instead, CEOs have been waiting for Washington to create the level playing field in which climate change and long-term growth can be addressed. Those CEOs are happy to lend their name to a campaign just as long as they can get on with the business of business.

Except the 2016 election delivered a roadblock. At the risk of understatement, the new power in Washington is not focused on climate change nor on long-term growth — yet.

So CEOs need a plan B. This week a group of chiefs are gathering at the World Economic Forum Annual Meeting in Davos, Switzerland, to talk about climate change against the backsliding signaled by the new U.S. president. From where I sit, they, and hundreds of others, need to rise to the occasion. In doing so, there is no better role model than Bill Knudsen.

Knudsen was CEO of General Motors in the perilous years before America entered World War II. He recognized two things: the unavoidable threat of the day, fascism; and that as Henry Ford’s former mass production wizard, Knudsen himself had unique talents the nation would need to defeat two wealthy industrial enemies. Before Congress had the nerve to act, Knudsen started to re-organize American industry, giving FDR the term "arsenal of democracy." Knudsen gave business new purpose.

For some CEOs, taking a stand is already in their DNA. But at the dawning of 2017, sustainable growth has taken on new urgency.

For some CEOs, taking a stand is already in their DNA. Groups such as The B Team, Focusing Capital on the Long Term and the World Business Council for Sustainable Development have been grinding away for years.

But at the dawning of 2017, sustainable growth has taken on new urgency. CEOs no longer can set aside some corporate social responsibility funds to support incremental advocacy efforts. Now the CEOs — and the big institutional clients of Fink — have to roll up their sleeves and figure out how to design and implement a new grand strategy for sustainable growth that addresses people, planet and profits.

The business case for strategic leadership is a no-brainer. For the United States, "The New Grand Strategy," by GreenBiz Executive Editor Joel Makower and co-authors Mark Mykleby and Patrick Doherty, lays out a pragmatic strategy for extraordinary growth. Overseas, the Business & Sustainable Development Commission’s new report does the same. The challenge lies in transitioning to the new economics of sustainable, long-term growth without help from government.

As CEOs know, the problem never has been about finding the right ideas. It’s all about leadership motivated by a compelling purpose. The purpose is now clear. We just need some Knudsens. 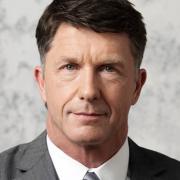 See all by Rick Miller