When world leaders stood together in 2000 to make the Millennium Declaration, they made a fundamental commitment to promoting a more equal and just world. So what progress has been made towards the complex issue of reducing inequality? Sustainble Development Goal No. 10 sets forth to reduce "inequality within and among countries."

The Millennium Development Goals which emerged from this certainly made good progress in some areas. There’s been a reduction in extreme poverty by half, which means 700 million fewer people living on less than $1.25 per day, and gains in gender equality — more girls enrolled in education in developing countries and greater political participation of women.

But data shows that income inequality is on the rise, in developed and developing countries alike. According to the OECD, income inequality is at its highest level for the past half century. The average income of the richest 10 percent of the population is about nine times that of the poorest 10 percent across the OECD, up from seven times 25 years ago.

And this is a problem for all of us.

Some income inequality is inevitable, even welcome. It helps drive progress, incentivizes and rewards those who work hard, develop skills and take risks.

But high and growing levels of income inequality are a significant threat to stability both within and across countries. The World Economic Forum’s report, Outlook on the Global Agenda 2015, ranks deepening income inequality as the most significant trend of 2015. According to those surveyed, inequality is closely related to challenges including "poverty, environmental degradation, persistent unemployment, political instability, violence and conflict."

In addition to the clear human cost of inequality, it’s also a huge waste of economic potential. For example, according to the UN, reducing child deaths by 4.25 per thousand children born (around 5 percent) for mothers with low levels of education can result in an almost 8 percent increase in Gross Domestic Product per capita ten years later. 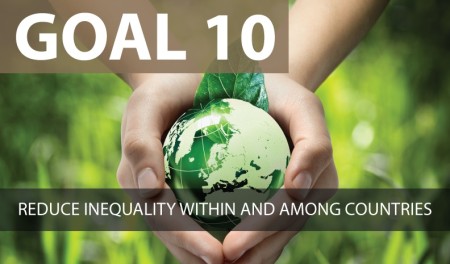 The global response to reducing inequality in the form of SDG10, and in fact the whole post-2015 agenda, is more comprehensive this time round. The reference to both "within" and "among" countries highlights just how much this is an issue for all countries not only developing ones.

Crucially, there’s also a much greater focus on the structural factors that cause poverty and inequality (for example, discrimination; lack of representation; lack of appropriate fiscal, wage and social policies), not just the symptoms (such as low income, education or health).

So the targets set out in SDG10 rightly have a broad scope, reflecting the many underlying economic, social and institutional factors that need to be tackled to promote more inclusive progress.

What should companies be thinking about?

Companies have the opportunity to make an active and unique contribution to this goal by considering:

1. Quality of jobs: Providing employment opportunities is important, but equally important is considering the quality of those jobs. This means looking at the wages paid to the lowest paid workers – both direct employees and those that participate in your value chain wherever that may be. Do wages allow workers to support themselves and their families, and provide basic needs such as housing, education, health? Does it offer a chance to earn a decent standard of living beyond basic subsistence?

3. Companies have long promoted equal opportunity through policies in line with national legislation and other frameworks. Even greater progress will be made through programs that promote empowerment. What are the barriers that prevent women, minority groups and the socially disadvantaged from fully participating within your organization and value chain? How can these be overcome?

Progress towards SDG10 certainly won’t be easy, but it’s one that is in the interests of us all.

As part of the SDGs 2015 series, Corporate Citizenship is collecting practitioner views about the implications of the SDGs for business. Have your say and complete the short survey here.

Baltimore is using the SDGs to build a more just city