Excerpted from The Heart of the City: Creating Vibrant Downtowns for a New Century (May 2019, Island Press) by Alexander Garvin.

Downtowns are altered by their occupants: inspired individuals and well-run organizations, often assisted by carefully crafted government programs. Thus, if we are to keep the heart of our cities vibrant and healthy, we must increase the likelihood that the people and organizations that have the capacity to keep them vibrant keep doing so. They succeed when it is easy to find information needed to respond to changing downtown conditions; it is easy to comply with relevant federal, state, and local government regulations; it is easy to obtain inexpensive financing; and it is difficult for opponents to prevent desirable downtown changes.

All the procedural, managerial and governance changes that are needed to make this possible depend on national institutionalization of the downtown experiment that has worked in hundreds of cities: the business improvement district (BID). In nearly every downtown a new, “standard” BID would become responsible for maintaining and improving the heart of our cities. This standard BID would provide all needed information about downtown, make it easy to comply with regulations, improve access to financing, supplement downtown development activities, and restrain undue opposition.

The standard downtown BID would be responsible for the entire downtown of every American city. These downtown BIDs will have to be established pursuant to federal statute, state constitutions, and city charters as a legal entity that is responsible for specified activities, financed largely at the local rather than citywide level.

Institutionalizing standard downtown BIDs requires more than cloning the most successful examples. The standard downtown BID would be a permanent, self-sufficient organ of local government (similar to the Philadelphia Center City District), empowered by Congress and state legislatures to perform basic functions. It must include a board of directors elected by the businesses, property owners, and residents of the territory for which it is responsible, plus specified federal, state, and city officials on an ex officio basis. The downtown public realm and infrastructure would be managed and maintained pursuant to a lease from the city government.

The standard downtown BID, together with relevant government agencies, would provide specified downtown services (e.g., traffic management, garbage removal, policing) pursuant to an operating agreement with the city government. BID activities would be financed by a dedicated property tax that goes directly to the downtown BID.

This standard downtown BID would be a nonprofit institution similar to the Minneapolis Park and Recreation Board, established nearly a century and a half ago. The rationale for BID creation is similar to the reason the Minneapolis Park and Recreation Board was created. It “will, at comparatively small expense, guarantee that the city will continue to thrive and add many millions of dollars to its real estate value.”

During the ensuing 135 years the Minneapolis Park and Recreation Board went from owning and operating nothing to managing 180 properties covering 6,809 acres of park (land and water) organized around 22 major stillwater lakes, 102 miles of designated walking and bicycle paths, 7 public golf courses, 96 supervised playgrounds, 47 recreation centers, 17 supervised beaches, 69 swimming pools, and much more. The $73.7 million that pays for its operations is derived from three sources: a dedicated real estate tax ($52.8 million), additional city aid ($9.3 million), and fees, fines, contributions, and other revenues ($11.6 million). As a result of its guaranteed source of income and board of directors (elected by the people they serve), the Minneapolis Park and Recreation Board operates “the best-located, best-financed, best-designed, and best- maintained public open space in America.” Similar legislation would create BIDs that could manage the finest downtowns that any city’s leaders could imagine.

The standard downtown BID would automatically be declared a tax increment financing (TIF) district, like the Atlanta BeltLine Inc.; a development corporation, like the Cincinnati Center City Development Corporation (3CDC), empowered to purchase, sell, and manage property; a state-chartered authority, like many port authorities empowered to perform government functions within the standard downtown district; and an agent of the federal government, empowered by written agreement with federal agencies to certify compliance with their regulations and issue permits.

The development functions of the standard downtown BID would be carried out in its capacity as a state-chartered development authority, which would be empowered to acquire, develop, operate, and maintain private property, exercise eminent domain, issue bonds and notes, grant loans and tax exemptions, create subsidiaries, issue permits, and exempt projects from or override local laws, ordinances, codes, charters or regulations.

The Standard Downtown BID Enabling Act would be the product of a meeting convened by an impartial organization, such as the U.S. Conference of Mayors, the National League of Cities, or the International Downtown Association, that would bring together all interested parties to discuss what should be included. Based on that meeting the organization would draft a federal and a state BID Enabling Act and then convene the same participants at a second conference at which they would adjust and accept the text. Thereafter, it would go to Congress and every state legislature and relevant city council for approval.

Downtowns differ in size and shape. Moreover, size does not with equate with success.

The boundaries of these BIDs would have to include the entire extent of downtown. Standardizing the size and location of a BID would be a mistake, however. Downtowns differ in size and shape. Moreover, size does not with equate with success. America’s largest downtown BID, in Memphis, occupies 6 square miles, stretching from northern marshland to southern suburban-style homes. Its generous territory has not given it the edge to dramatically improve downtown Memphis, which has yet to see a significant renaissance. More successful BIDs, such as the 34th Street Partnership in New York, the Center City District in Philadelphia, and the Uptown BID in Houston, are all less than a square mile. Total employment in the 6 square miles of the Memphis BID is only 82,084, whereas more than 240,000 people work in the Alliance for Downtown New York, a BID that encompasses an area one-fourteenth the size.

What is important is that BIDs have boundaries that match downtown’s development, including all high-density, mixed-use development related to the central business district. As more development occurs, that territory may well expand beyond previously set borders, thereby requiring redefinition.

In Louisville’s downtown BID, a recent expansion was voted in to “serve new and well-established businesses in the eight-block area that is experiencing significant growth and revitalization.” BIDs will have to amend their boundaries regularly so that they reflect the changing extent of downtown development. Moreover, because TIF district boundaries match those of the BIDs, expanding boundaries will mean additional revenue.

The existence of a common set of statistics and reports for all downtown BIDs will allow everybody to see what is working well in each downtown BID and learn why those actions have succeeded.

The existence of a common set of statistics and reports for all downtown BIDs will allow everybody to see what is working well in each downtown BID and learn why those actions have succeeded. Each BID would be able to see what others are achieving, how they went about achieving it, and what benefits it generated. Thus, innovations will quickly spread from one downtown BID to another.

I realize that some cities will not want to create powerful downtown BIDs. Some mayors and city councils may not be ready to give up power over the heart of their city. Others may want to retain control over all city revenues and not cannibalize the city tax base. That is to be expected in any federal democracy. However, I believe that the extraordinary success of the standard downtown BIDs (congruent with a city’s entire downtown) will result in increasing those cities’ prosperity and provide them with a competitive advantage over those that reject the idea. Consequently, in time, the holdouts will either succumb to competition from other downtown BIDs or adopt the same mechanisms.

The legislation would include a mechanism for deciding the territory covered by the standard downtown BID, the dedicated tax it is entitled to receive on an annual basis, and the specific services it must provide. Each downtown BID would be responsible (at a minimum) for collecting and distributing the same annual statistics and providing the same activities and services.

Thus, each BID would be able to learn what had changed during the previous year, as well as where and why those changes had occurred. 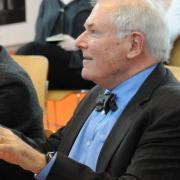 See all by Alexander Garvin