Sponsored: The complexities of balancing human nutrition and sustainable land use.

This article is sponsored by National Cattlemen’s Beef Association, a contractor to the beef checkoff.

Food security is a most basic human need. Historical accounts show that for centuries, human societies around the world have raised concerns about our food supply. This contemplation has driven innovation and we have, quite successfully, adapted to feed and nourish people.

With increasing constraints on our planetary boundaries — we’re not getting more land any time soon — and a growing world population, the areas of sustainability and human nutrition have merged into a new conversation: sustainable nutrition. This convergence is more of an evolution than a revolution. Thomas Malthus’ 1798 essay on population growth made a similar warning as contemporary concerns about nutrition and sustainability — demand for food will outpace our ability to produce it.

The pressing issue of climate change, unknown in Malthus’ time, and shifting knowledge and ideas about what constitutes healthy dietary patterns have added layers of complexity to this age-old problem. The nutrient richness of animal-source foods is widely accepted and foods such as eggs, dairy, pork and beef are valued because the essential nutrients they provide are required for growth and development, and can improve the quality of human life.

For food insecure populations, this is especially true, and these populations are not only in the developing world but exist even in developed, wealthy nations such as the United States, where one out of every six children is raised in a food insecure household. Yet, growing demand for animal-sourced foods, has been called unsustainable by some who argue that raising demand for nutrient rich animal-sourced foods cannot be met without exceeding environmental boundaries.

Animal-sourced foods, such as beef, contain more protein and essential micronutrients per kcal as compared to most plant-sourced foods.

At the root of many concerns about animal-sourced foods are the use of metrics such as greenhouse gas emissions produced or land used per pound of food or per kcal. However, such metrics assume that all foods draw from the same natural resources for their production and are interchangeable from a nutrient-richness standpoint, which is not true. Animal-sourced foods, such as beef, contain more protein and essential micronutrients per kcal as compared to most plant-sourced foods (Table 1). Newer science is illustrating that higher environmental footprints of animal-sourced foods, which have declined over time, may be a necessary tradeoff because of their nutrient-rich properties.

Some argue that the land used to produce animal-sourced foods is easily interchangeable with land that could be used to grow the plant-sourced foods we like to eat, such as wheat and vegetables. However, this is untrue, especially for the lands that support ruminant (cattle, sheep, goats) animal agriculture in the United States, because most of these lands are too arid, too rocky, too steep, or have too poor of soils to grow crops. Often ignored in discussions of sustainable nutrition is that ruminant animals can upcycle human-inedible plants to high quality protein and other essential nutrients on marginal land. Ruminants expand the land we have available to make human food.

According to the USDA Economic Research Service, grazing lands make up nearly 800 million acres or 36 percent of the U.S. land area (Figure 1). Of that 800 million acres, only 12.8 million acres is classified as cropland pasture — grazing lands that could be converted to growing crops without major improvements. In the scenario of converting grazing lands to croplands, negative consequences would be expected. For example, the rates of soil loss on cultivated cropland are over four times greater than pastures, and the loss of grasslands can mean decreased habitat for wildlife. 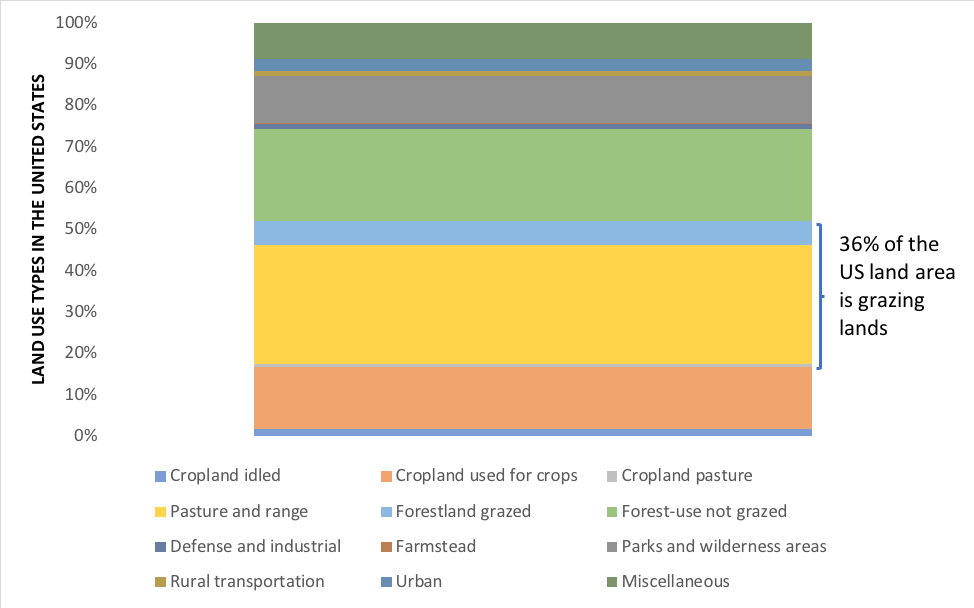 World leaders, recognizing our dual nutrition dilemma — being overfed and undernourished — are encouraging their constituents to move from food systems that feed people to those that nourish. It’s not just about calories, but the nutrients that those calories supply. For high quality proteins such as beef, that supply essential amino acids, the building blocks of protein, nourishment comes at a lower calorie cost (Table 1).

Sustainable nutrition also must consider the nutrient-rich calories that are being lost through food waste. Food waste is estimated to be the single largest source of waste entering municipal landfills. Estimates vary, but in the United States 30 to 40 percent of edible food is wasted, without considering overconsumption.

This means natural resources go towards producing food that does not nourish people but does end up producing greenhouse gases in landfills — landfills are the third largest source of methane in the United States — when it’s disposed of. On average, animal-sourced foods are wasted less than fruits and vegetables. In 2010, USDA estimated that U.S. food waste cost $162 billion; and globally, food waste was estimated to cost $936 billion (the size of Indonesia’s GDP) and produced more GHG emissions than India in 2011. Consequently, food waste undermines food security and is an environmental and economic burden. Curbing food waste in a practical and cost-effective manner could be a triple-bottom line sustainability win.

One thing is clear, progress in sustainable nutrition continues and animal-sourced foods are increasingly being recognized for their contribution to quality lives, which includes healthy, sustainable diets. Sustainability is more than environmental footprints and nourishment is more than calories supplied, reminding us of the adage "for every complex problem there is an answer that is clear, simple, and wrong."

Tackling the evolving field of sustainable nutrition will require sustainability and nutrition scientists working together, inspiring new thinking and new solutions to meet one of our oldest and greatest callings — sustaining and improving human life.