The Ellen MacArthur Foundation is bringing together cities, chefs, food industry executives, and other thought leaders to discuss how to redesign our food system in order to make it an active contributor to the economic recovery and the regeneration of the natural world, during Big Food Workshop, a three-day online workshop June 15-17. This blog sums up the solutions and ideas put forward during the workshop, as well as our reflections and conclusions.

Our two sessions Monday were all about food and cities. I came out of them feeling uplifted, in the way that only hearing brilliant ideas can make you feel. Our six speakers clearly also inspired the over 1,500 listeners who tuned in live from all over the world — from Saudi Arabia to China, Brazil, Israel and more — and engaged in lively discussions.

First, we heard from the doers; representatives from New York City, London and São Paulo, all partners of the Foundation’s Food initiative, who emphasized the importance of food security in cities, which has been exacerbated by the COVID-19 pandemic. Cities are influential in our food system. With 80 percent of food expected to be eaten in cities by 2050, they have the opportunity to harness their massive demand power to redesign food systems that are more resilient to external shocks while regenerating the environment they rely on. Yet, for many urbanites, supermarket shelves are the closest they ever get to the source of their food.

With 80 percent of food expected to be eaten in cities by 2050, they have the opportunity to harness their massive demand power to redesign food systems...

Fortunately, that is beginning to change in São Paulo. During the first session of the Big Food Workshop, Luiz Álvaro, the city’s secretary of international affairs, highlighted that Brazil’s largest city has set aside an astounding 33 percent of its surface for family farming. Through its "Connecting the dots" initiative, São Paulo has used its power as a large public procurer to source food from local farms in order to serve as many as 2.3 million meals per day to public school students. During the lockdown, when schools were closed, the municipality swiftly redirected this food supply to a system of local food banks, which has been providing "food baskets" to over 1 million families in the city.

Food security for city residents in New York also remains the top priority for the administration of Mayor Bill de Blasio, according to Kate MacKenzie, director of the Mayor’s Office of Food Policy, with the COVID-19 pandemic making this need even more acute. The number of New Yorkers facing food insecurity is estimated to have doubled to almost 2.4 million since the beginning of the lockdown.

Among the several examples of the work that the city of London has been doing to ensure food security, Clare Pritchard, chair of the London Food Board, noted the new circular economy guide — suggestively titled "Food that doesn’t cost the earth" — for the food service industry that Advance London, a circular economy business support program, just published. While out-of-home eating has been particularly hit by the current crisis, Pritchard sees that the pandemic offers the food industry an opportunity to overhaul how food is produced, designed, sourced and experienced going forward, and the role circular economy can play.

Our second session of the day brought in the thinkers. Harriet Friedmann, Professor Emerita at the University of Toronto, and Carolyn Steel, an architect and author of two landmark books about food and cities, painted a compelling picture of how food historically has shaped our cities. Steel described the relationship between cities and their hinterlands in the past as a "fried egg," with the city being the yolk and the hinterlands the egg white — a wonderful metaphor. The reason for the different spatial scale was obvious: Cities needed the surrounding countryside to feed themselves. The growth in global trade has distorted this close-knit tie between urban and rural areas, Friedmann pointed out, leading to a situation in which the food grown around cities is exported, while cities import the same produce from far-flung places.

For Steel, there is no question about what the "good life" post-COVID-19 should look like: We need to assign value to things that are valuable, such as food. Cheap food is an oxymoron, she believes, reinforced by the research that the Ellen MacArthur Foundation has done into the food system, which illustrates that for every $1 spent on food, $2 worth of negative externalities are incurred. By valuing food highly, we put value back into the land.

The day concluded with Stephen Otieno, representing the Climate Leadership Group at C40, a network of some 100 cities working to combat climate change. Otieno spoke about the work that he and his team have done to develop a food strategy for Nairobi. Echoing the other speakers, Otieno concluded that any urban food strategy will have to put residents and the environment at its center, ensuring access to nutritious and sufficient food and avoiding detrimental impacts on nature. For a rapidly developing city such as Nairobi, now is a critical moment to avoid industrial linear systems and move straight to a circular economy for food.

If you’ve missed today’s sessions, you can access the recordings and other useful information on the food page on the Ellen MacArthur Foundation website. If this has given you food for thought, join us Tuesday when we’ll be speaking with four famous chefs, as well as food service providers and distributors about their roles and what it means to design our favorite dishes and menus with the system in mind. In case you miss it, I’ll be back here Tuesday with the roundup. 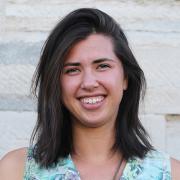 See all by Emma Chow