It will take $500 million by 2025 to create the recycling system of the future and dramatically increase the collection of post-consumer plastics, according to the Recycling Partnership.

It's safe to say that nobody has called the recycling system in the United States ideal. Tens of thousands of independent municipalities govern recycling, if it exists at all, and less than half of the consumer waste that could be recycled will be. Even in progressive California, a San Franciscan who enjoys city compost collection at the doorstep unwittingly will toss trash into the wrong bin when visiting Los Angeles.

Solving such inefficiencies requires strategic thinking, a unified vision and plenty of cash, according to the Recycling Partnership, which in a report released Monday sets forth a three-step plan for transforming recycling in the United States and ushering in an era of circularity, particularly for plastics.

It will take $500 million by 2025 to create "Recycling 2.0" and advance post-consumer plastics collection, according to "The Bridge to Circularity: Putting the ‘New Plastics Economy’ into Practice in the U.S.," released at VERGE 19 in Oakland, California. The rallying cry comes with an invitation to build a community of changemakers in the space.

"With this report, we are providing the clear roadmap to create a new and improved recycling system of the future," Keefe Harrison, CEO of the Recycling Partnership, said in a press statement. "We’re providing actionable solutions to help current and future partners build a sustainable and effective recycling system in the U.S."

This "roadmap" comes a year after hundreds of companies pledged, per the ambitious New Plastics Economy Global Commitment, to collectively prevent plastic from becoming waste in the first place. That effort, led by the Ellen MacArthur Foundation (EMF) with U.N. Environment, involves brands from Burberry Group to Walmart each setting forth concrete goals with annual progress reports.

As of June, the effort has attracted more than 400 public and private signatories (PDF), including companies responsible for producing  20 percent of the world's plastic packaging. Some of those same businesses, such as PepsiCo and Target, are also funding partners of the Recycling Partnership.

"What we’ve seen as an appetite for change hasn’t yet translated to action in the U.S.," said Stephanie Kersten-Johnston, director of innovation for the Recycling Partnership and the report's lead author. "This report is really designed as a stimulus to change the conversations from 'we need to do this' to 'this what we're going to do and this is how we’re going to change the landscape.'"

One of the biggest hopes is that the players along the supply chain with commitments relating to New Plastics Economy will put commitments and funding toward making changes on the ground.

Several consumer giants are already putting serious money behind shoring up U.S. recycling. Last week, the Recycling Partnership shared that four years early, it has reached a $25 million fundraising goal set in July 2018 with PepsiCo Foundation, which issued an initial $10 million toward the All in One Recycling Challenge. An additional $15 million has been committed by private companies, including Alcoa Foundation, Colgate-Palmolive and Target. Municipal funding is contributing $75 million toward the challenge, which seeks to distribute recycling carts to half a million households in five years.

As for the next steps in moving toward circularity, the Recycling Partnership's report endorses the following three actions: 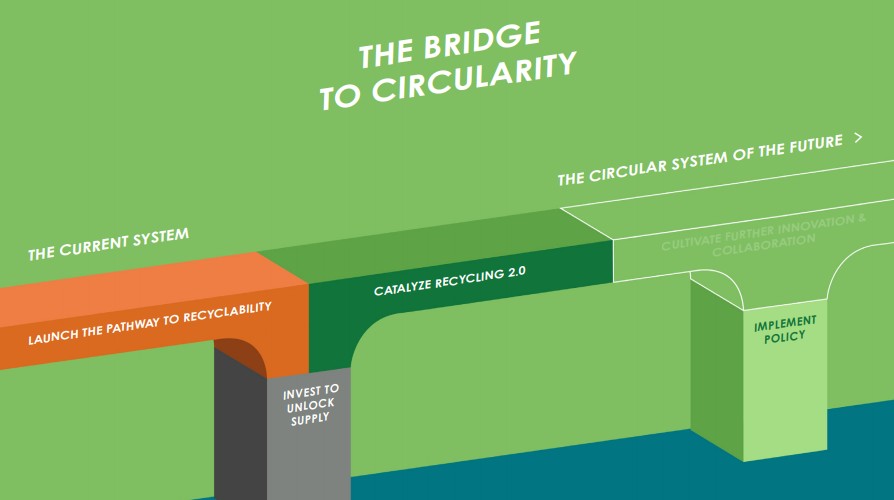 1. Creating a pathway to recyclability for more materials

U.S. recycling technology and infrastructure can't keep up with the speed of innovation in packaging. Designers have been creating ever-lighter and cheaper packages, particularly in hard-to-recycle things such as plastic applesauce pouches. Already only 15 percent of plastic containers and packaging are recycled, according to the U.S. Environmental Protection Agency. And as more mountains of plastics have been produced since the 1960s, a smaller proportion of them has been recovered for recycling or reuse.

Yet packaging industry signatories to EMF's "New Plastics" commitment have declared that they intend for their packaging to become reusable, recyclable or compostable over the next five years.

It's a tall order. To narrow that gap, the Recycling Partnership plans to work with the Sustainable Packaging Coalition (SPC) and the Association of Plastic Recyclers (APR) to home in on materials that recycling facilities can rarely or never recycle, including films and small-format packaging. Together, they would create an industry plan to research and improve the circular potential of these materials.

The New Plastics Economy commitment calls for making recycled materials available for new uses, and it's expected to catalyze new markets for post-consumer recycled plastic packaging. However, U.S. demand for recycled polyethylene terephthalate (rPET) resin will be 1 billion pounds short of supply by 2025, given the New Plastics commitments made by companies such as Coca-Cola, Nestlé and PepsiCo to increase the recycled content of the water bottles they sell, the report says. The shortage may be worse than projected, given the rising source of demand for the resin to be used in carpets, jackets and sneakers.

The Recycling Partnership calls for $250 million of investments, likely from industry sources, to improve residential waste-collection equipment, educate consumers and improve the collection of plastics through materials recovery facilities. 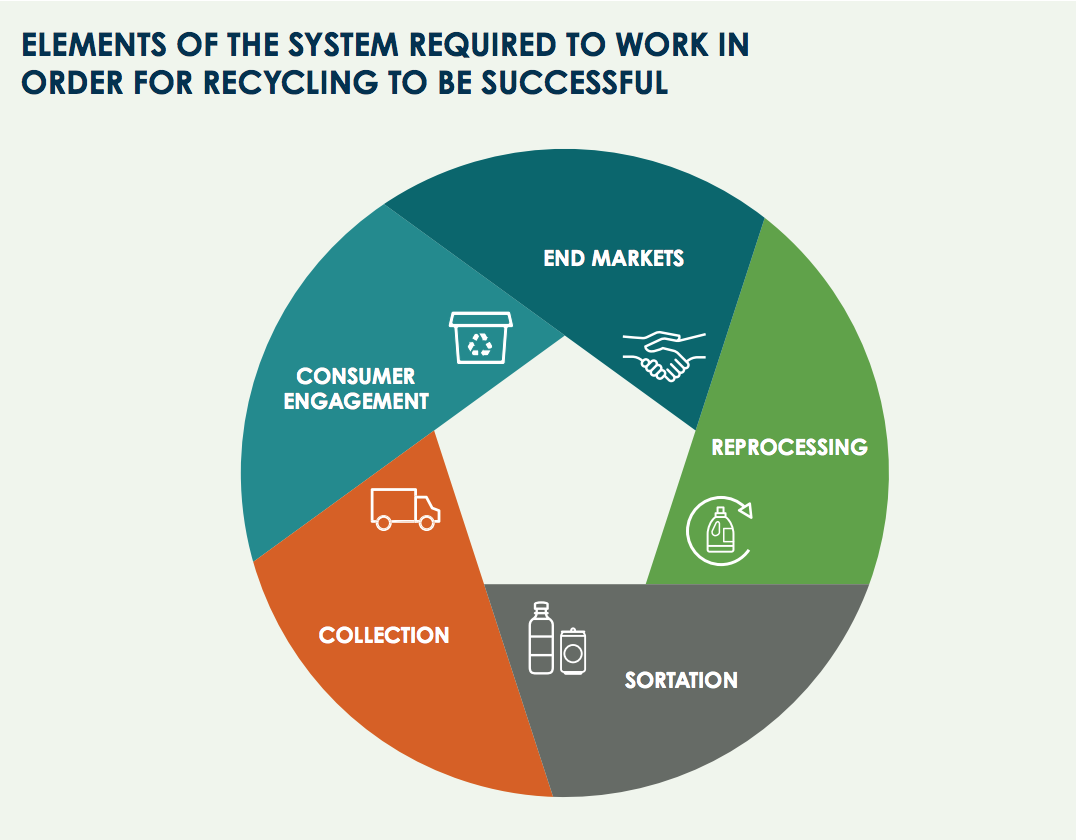 The report suggests the "bold and transformative action" necessary to transition to circularity requires $250 million toward grants for programs that would back research and development, build "robust data systems," plug supply-chain gaps, massage consumer behavior and improve recycling technologies and processes. The Recycling Partnership foresees "a uniquely American" multi-stakeholder approach.

The aspiration is to "to pursue what we call transformative policy," Kersten-Johnson said, yet that can take a long time to get off the ground, and so can innovative debt and loan mechanisms for early-stage companies. So she foresees a national grant structure to create systems change at scale, "a public-private partnership with a pathway to funding in the long-term," with money coming from retailers, processors, haulers and other stakeholders including foundations.

"We are delighted to see The Recycling Partnership translate the ambitious targets of the New Plastics Economy Global Commitment into concrete and progressive actions to be taken in the U.S., urging businesses and governments in the country to step up efforts towards transitioning to a circular economy for plastics,” Sander Defruyt, lead of the New Plastics Economy initiative at EMF, said in a statement. "Stakeholders in the U.S., as well as around the world, must address plastic pollution at its source, by eliminating the plastics we don’t need, innovating the plastics we do need and circulating them safely in the economy to keep them out of the environment."

The report is careful to point out that it's not just about plastics but seeking to build momentum on all sorts of materials, with plastics as a launching point.

"I hope there’s recognition that doing good work around plastics will never be enough," Kersten-Johnson said. "No material is immune from impacts, albeit that plastic has been in the limelight lately."