A tale of two 'living' buildings in the Capitol

In biology, "form fits function" refers to an organ or structure designed to perform within its environment; for example, a heart is designed to pump blood through the body. But the heart, too, needs a healthy environment — free from stress and environmental toxins — in which to function optimally.

In architecture, "form follows function" is the principle that a building’s design should be based on its intended function. But built environments, in which people spend 90 percent of our time, are more than structures to occupy space. Buildings are primary energy consumers in the United States, ahead of transportation and industry. They are where our hopes, dreams and failures are realized, and building philosophy is evolving along with the aims of the organizations housed in them.

Within earshot of the White House in Washington, D.C., is the Summit Foundation, a family foundation focused on grantmaking in ocean conservation, gender equity and sustainable cities — doing private-sector work for the country’s public well-being. In June, its headquarters became one of 22 projects in the world (and the first in the nation’s capital) to earn the Living Building Challenge (LBC) Petal certification.

The LBC certification, administered by the International Living Future Institute (ILFI), is a third-party verified program that challenges organizations to meet at least three of seven categories, or design "Petals": Place; water; energy; health and happiness; materials; equity; and beauty. Anecdotally, the challenge promotes the health and performance of the people working in the buildings, as well as their communities — but it's difficult to measure the objective value of the program.

Is designing for health a perk, or something that employers owe their employees?

The line between hard and impossible

The Summit Foundation earned the place, materials, equity and beauty Petals of the Living Building Challenge. From the project’s conception to completion, earning the certification for the 5,000-square-foot, the 10th-floor office took more than two years. The project is also pending LEED CI V4, Platinum certification.

"We set out to try to walk the line between hard and impossible," said Lex Sant, Summit Foundation vice president and treasurer. "When I talk about that, I’m really speaking about the materials petal."

This part of the challenge also yielded the most tangible benefits and the one that hit closest to home for Sant and his family. The organization began the materials petal design in November 2015; in December, Sant’s mother, Summit Foundation President Victoria Sant, was diagnosed with cancer (she since has recovered).

"It immediately made really tangible why this mattered so much," he said. "That she could come here and know that this was a place that would not compromise her health or well-being became enormously important to me."

The LBC focuses on products with the Declare label, which calls for the chemical inventory of a product down to a disclosure threshold of 99.9 percent. Furniture and products that are LBC-compliant also are free of red list chemicals, which are proven to pollute the environment, bio-accumulate in the food chain until they reach toxic concentrations and harm construction and factory workers.

Perkins + Will, the architect behind the Summit Foundation’s project, researched Declare label products, such as flooring finish materials and paints, long before the design process began. They engaged their design contractor, RAND, earlier than usual in order to perform materials sourcing due diligence and materials training with construction subcontractors.

All of the materials, many of which were sourced in small quantities, had to be documented to meet LBC requirements. Waiting for small products, such as a sealant, to be LBC-approved slowed down the pace of construction.

Nearly half the project’s building materials were sourced within 310 miles of the project site to reduce carbon emissions from transportation. This caused road bumps when purchasing from small vendors — many didn’t document their products, nor did they speak the sustainable materials lingo.

Waiting for small products, such as a sealant, to be LBC-approved slowed down the pace of construction.

"A lot of the work that we were doing was trying to find materials that could meet the aesthetic ambition that we had, in addition to the environmental and materials-related standards," said Sant. "Going into this project, we underestimated how hard that would be."

Part of the lengthy design process was intense communication between contractor, architect and client, said Lisa Weeks, principal and director of interiors at Perkins + Will, who said this is "really unusual in an ordinary commercial construction job."

"The LBC requires a huge commitment on everyone’s part," she said.

Another focus was leaving a low carbon footprint. The team selected ducts, pipes, gypsum board, ceiling tiles, furniture and carpet based on recycled content. For example, the project’s carpet was manufactured by Interface, which generates more than 80 percent of its energy from renewable sources. Furthermore, all but 5 percent of waste generated during construction was diverted from landfill and recycled.

The Summit Foundation didn’t share the costs of their project, but according to James Connelly, vice president of products and strategic growth at the International Living Future Institute, "what we’re hearing from the market is that LBC projects are between 5 to 20 percent more expensive for a typical office building," especially for the materials petal.

"If we had tried to do a beautiful project that didn't meet sustainability standards, we might have spent some substantial fraction of what we did spend on it," said Sant. "Because time and money are both tradeoffs."

But was it worth it for the organization of 15 people? Sant said yes. "There were times in the middle that if you’d asked me, I might have equivocated a bit, (but) I think a lot of things in life that are really satisfying were really hard in the middle of the process."

"We were able to get Geiger, a major furniture manufacturer, to retool their deliverables a year ahead of time for a small-scale project," said Weeks.

[Learn more about Living Buildings at VERGE 17, from Sept. 19 to 21 in Santa Clara, California]

Can a building be healing?

The headquarters of the American Society of Interior Designers (ASID) is a 10-minute walk from the Summit Foundation. In June, with the help of the Perkins + Will team, ASID became the first project in the world to receive WELL Platinum Certification along with the LEED Platinum ID+C (interior design and construction) designation, which it achieved at the start of the year.

It is meant to be a "living lab" for the design community, monitored by Cornell University, to assess whether WELL certified buildings truly increase job satisfaction, employee health and productivity. 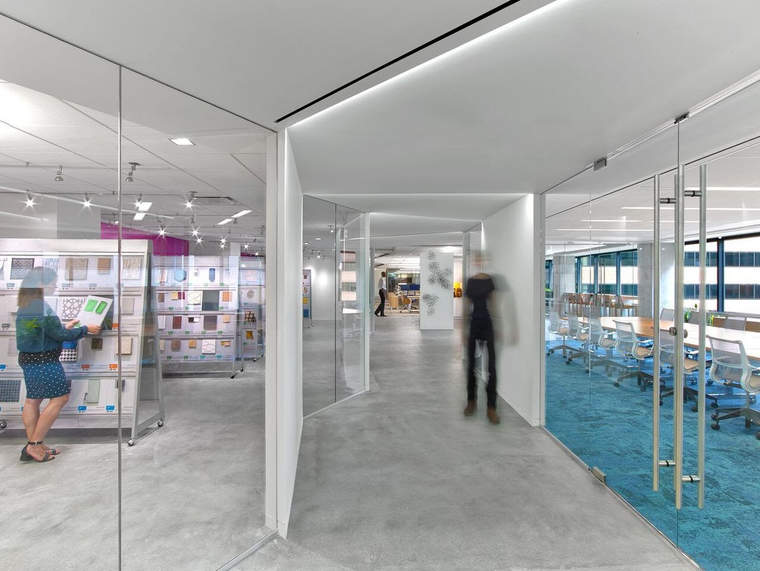 ASID CEO Randy Fiser said that the organization traditionally offered workplace wellness programs, fitness centers and nutrition plans to employees. "When we add design into the mix, we’re creating an atmosphere for thinking about how elements like acoustical, emotional and thermal comfort" leading to improvements in employee productivity, engagement and retention, he said.

The WELL Building Standard was developed in 2014 by Paul Scialla, a former Goldman Sachs banker who started a new career by launching Delos, the company that founded the International WELL Building Institute and the WELL Building lab. Delos claims to provide "evidence-based research" by, for example, partnering with the Mayo Clinic to prove that access to clean air, natural light and open space can improve employee nutrition, mood and even performance. Third-party research has begun to back the organization’s claims.

"Getting people to change their behavior is difficult," said Schialla in a filmed interview. "So introducing a passive delivery of prevention into our daily lives has a profound societal impact."

Air quality is an interlocking aim of LBC and WELL certification. According to WELL research, the concentration of indoor air pollution indicators can be up to five times higher compared to the outdoors, and the World Health Organization estimates that 12.7 percent of premature deaths can be prevented by improving global air quality. To this end, WELL Buildings use products that do not off-gas volatile organic compounds (VOCs) and limit contact with harsh or carcinogenic compounds.

Part of ASID’s challenge was sorting the necessities for the WELL Platinum certification from the 'nice to haves.'

Pricing for WELL certification begin at $4,000, and registration fees can cost up to $10,000 depending on the project size. Performance verification is $9,000. But Delos makes the case that if you spend more, you get more and better health outcomes.

"Some workplace [healthcare] programs spend $700 on an individual," said Whitney Austin Gray, vice president of Delos. "Of Fortune 500 companies, we interviewed 300. Six percent evaluate how they spend money on health and wellbeing packages."

Part of ASID’s challenge was sorting the necessities for the WELL Platinum certification from the "nice to haves," said Haley Nelson, senior interior designer and associate at Perkins + Will, DC.

Overall, the cost was worth it. "People are the greatest cost to business, but by investing in well-being at work through a certification system like the WELL standard, you can […] ultimately help retain top talent and make their time at work more effective."

This begs the question of whether living, LEED and WELL buildings can scale or "go viral," the way that houses with rooftop solar arrays seem to influence their neighbors. For example, Maryland and Virginia already are LEED building hotspots.

And can they affect pervasive societal problems? Can design address issues such as equal opportunity, diversity and fairness?

Elsewhere, larger-scale projects are experimenting with shifting social trends: Georgia Institute of Technology  is working on its LBC certification, emphasizing the equity petal. It is introducing ideas such as scheduling building custodians to work days rather than nights so that they can meet with the students.

The ILFI also offers a Living Building Challenge Framework for Affordable Housing, which helps multi-family affordable housing projects build homes that have no energy bills (from use of on-site or local renewable energy) and toxic chemical-free.

The opening question of the LBC standard asks, "Instead of a world that is merely a less bad version of the one we currently have — we ask a simple and profound question — what does good look like?"

The buildings of the future may be living labs defining those answers, which are as varied as the lives led within them.

Built to last: The business case for living buildings in 2019

How Etsy crafted its biophilic headquarters