Spoon-fed applesauce has become something of a relic of the past in little over a decade, replaced by on-the-go fruit pouches that toddlers can squeeze in one hand and slurp. The pouches are easy to stash in a purse, last for months in a pantry and are relatively nutritious.

But while parents appreciate the convenience of these minimal-mess snacks, many also cringe when they toss the single-use packaging into the trash. Most of these pouches are made of layered films and other plastic materials that are difficult, if not impossible, for U.S. municipal recycling systems to peel apart and process. So, to the landfill they go.

Demand for flexible food packaging is set to become a $3.4 billion market by 2022, a growth of nearly 4 percent per year, according to a Freedonia Group report several years ago. That includes an array of pouch designs beyond the juvenile market, such as stand-up zippered bags for things such as popcorn and cookies. Food companies increasingly favor the bendable, smashable packaging for being lightweight and therefore low-carbon when it comes to shipping, so it's in their best interest to improve the sustainability of the materials while winning over the vocal segment of ecologically aware, social media-savvy millennial moms and dads. And sales of baby-food pouches appeared to flatten or dip slightly in the past couple of years, according to market research by Spins and IRI.

That's partly why two leaders in the world of pureed-fruit pouches have invested years toward reinventing their packaging, some of which is set to reach the market as soon as this spring. GoGo Squeez maker MOM Group and Nestlé's Gerber each have taken a different tack, ultimately picking different polyolefins for their primary material: polyethylene for GoGoSqueez and polypropylene for Gerber.

At this point, however, neither new pouch will be accepted by most mainstream recyclers in the United States, which mostly focus on paper and corrugate and lack the materials sorting-and-stripping capabilities to handle flexible plastics. The companies appear to be banking on the potential that recycling innovations that are widespread in Europe eventually will reach U.S. shores, yet this is largely beyond their reach. (Nestlé is making separate investments in this direction; more on that below.)

Here's what's inside the pouch-reinvention efforts by each company. 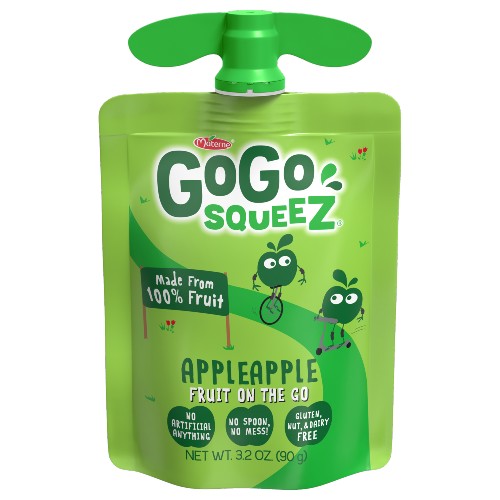 GoGo Squeez is, if you will, the mother of all applesauce pouches, selling 1.5 billion a year and commanding two-thirds of the market share for fruit and dairy squeezers. You may praise (or blame) CEO and Chairman Michel Larroche of parent company MOM Group, for popularizing squeeze-and-slurp pouches for applesauce and other fruit purees in the United States, starting in 2008. (To be fair, Plum Organics brought its baby food pouches to market a year earlier.)

The products are based around a French predecessor Poms Potes, which Larroche, a 10-year veteran of Heinz in Europe, once smuggled across cross-Atlantic flights by the suitcase-load to his brother's family in Manhattan. When Larroche joined MOM Group, a company with century-old roots in France, the father of three athletic daughters saw an opening in the snack-happy North American market.

"We have a very nice product, very convenient," Larroche told GreenBiz. "But my obsession is to make it perfect, and making it perfect means we need to make progress on recycling. This movement is going to grow. The sensitivity of consumers to better protect the earth is very important, especially among the youth, and something we fully embrace."

My obsession is to make it perfect, and making it perfect means we need to make progress on recycling.

Five years ago MOM Group began reinventing its pouches. The current format is made of multiple materials including inner aluminum with a BPA-free plastic layer, a "recyclable" outer paper layer and oxygen barriers for freshness.

By 2022, all of GoGo Squeez's new, all-polyethylene packages will adopt a format that reduces some of the layering. Eliminating aluminum will slash the CO2 impact in half, Larroche said. It also makes for more flexibility, which spurred the company to rework "the origami of the pouch." The signature propeller-shaped polyethylene cap will feature 40 percent less plastic.

A collaboration since 2011 with upcycling innovator TerraCycle enables consumers to mail in empty GoGo Squeez packs with caps so they can be repurposed into playground equipment, notebooks and other products. The MOM Group says the new pouches also will become easier for upcycling through TerraCycle.

"Not everything will be recycled in the beginning but at least we’ll push in the right direction," Larroche said of the fact that stateside recycling programs are generally unlikely to handle even the new designs. Yet he hopes that consumers will see MOM Group's efforts as sincere and innovative. He hopes people will pressure political and business leaders to improve the nation's recycling infrastructure, as he also aims to do. The sorting technology exists, but it will take some time, he insists, before it is widely adopted across recycling infrastructure.

"It’s not the end of the story," Larroche said. 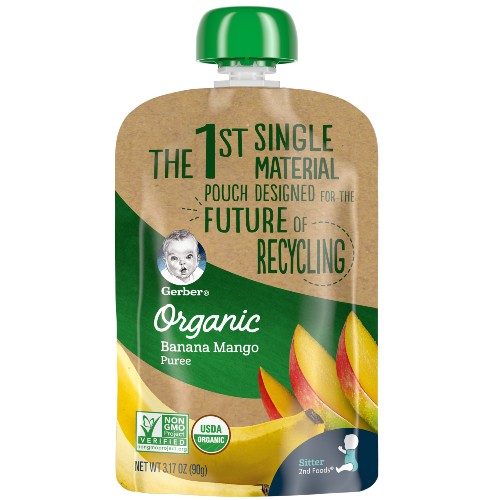 Nestlé's Gerber also has partnered with TerraCycle to offer upcycling options for some of its snack pouches and other containers for children's food. This alliance, launched in fall 2019, should enable the baby food maker to recycle the 20 percent of its packaging that otherwise would not be, in order to meet Nestlé's goal of 100 percent recyclability or reusability across all product lines by 2025.

And back in 2016, Gerber directed research and development toward its fruit puree pouches.

"We started to dig in, asking, what’s the best way to make this a sustainable solution?" said Tony Dzikowicz, associate director of packaging at Nestlé Nutrition. "We started to look at a broad range of suppliers with kind of an open goal, asking, what are the different ways we can get there?"

We had to design our pouch to be intrinsically recyclable, meaning anywhere you go you can remelt and extrude it and make something out of it.

The Nestlé subsidiary teamed up on the project with Gualapack Group in Italy, with which it had worked for a number years on pouches made of polyethylene (PET), nylon and a multi-layer laminate. Gualapack specializes in low-footprint, circular solutions for packaging, which span a range of processes including extrusion, lamination, printing, pouch making and injection molding. It has nine production plants in seven countries and nearly 2,000 people on its payroll.

"That’s when it got more real, from exploratory investigations to doing more trials. That’s when we found the path," Dzikowicz says. "From there it’s been a series of evolutions. Multiple iterations ultimately got us to the first monomaterial pouch."

In 2018, the team settled with Gualapack on what it calls the industry's first single-material pouch. The pouch and cap are both 100-percent polypropylene, which was chosen for its recyclability in Europe. The results are open source, so other companies can use the technology if they like.

"We had to design our pouch to be intrinsically recyclable, meaning anywhere you go you can remelt and extrude it and make something out of it," said Michelle Marrone, Gualapack's product innovation and sustainability project manager.

In Europe, recycling facilities commonly feature optical infrared high-speed scanners that can "read" incoming garbage and sort out even flexible materials, such as the snack pouches. European Union policy on the circular economy includes a goal for all plastic on the market to be reusable or recyclable by 2030.

In the United States, by contrast, the technology has not been widely invested in and installed. "If [the packaging] is not properly separated and sent to a recycler, there’s really no control we have over that," Marrone said.

If it's not properly separated and sent to a recycler, there’s really no control we have over that.

Gerber will start in May by selling its new pouch, containing organic banana mango puree, on its website. Then it'll take time to scale up to its portfolio of 80 types of pouch snacks. Anything that contains dairy, which is more challenging to keep fresh than fruit alone, will require a different approach.

"This is a step in the process," Dzikowicz said. "There are many things that come together. It’s not only with us, what we as a manufacturer can provide, but the entire system needs to work."

Under the experimental project, Pottstown, Pennsylvania, has become the first U.S. community to collect and recycle thin-film plastic. Gerber says that both its current and future fruit pouches can be recycled with the technology at play there, which involves sophisticated optical sorting systems. Material from the pouches can be turned into plastic pellets or industrial materials such as composite lumber or roofing. 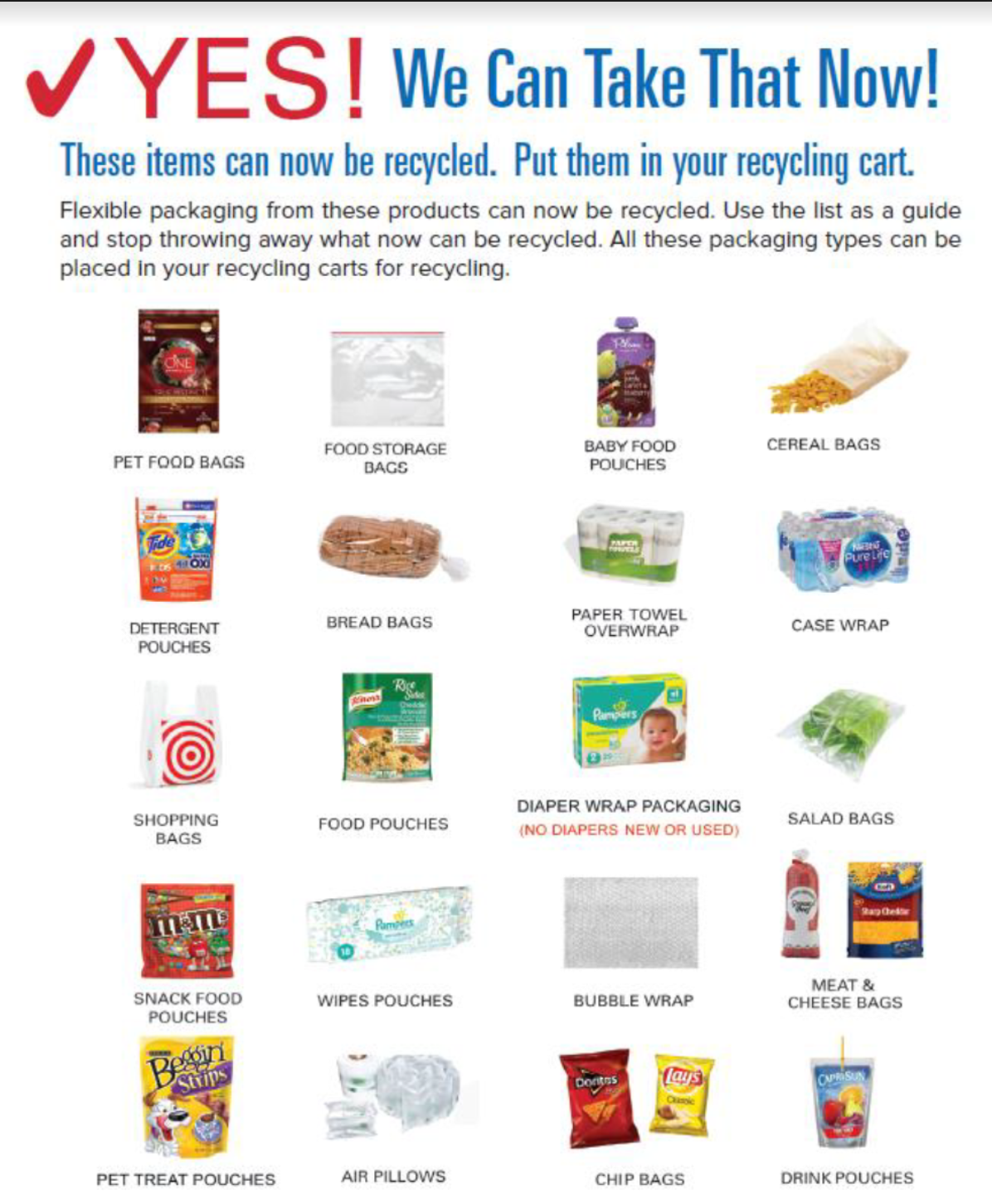 The ultimate goal of the MRFF project is to accelerate such advancements nationwide. Still, there's a long road ahead before popular flexible packaging can be diverted at scale from the junkyard. Its use keeps on rising, particularly as companies favor the lightweight packaging for reducing energy use and carbon emissions at shipping time.

Representatives on the recycling and materials recovery side tend to curse product designers for failing to consider what happens after their creative packaging is spent. Wanda Redic, senior recycling specialist for the city of Oakland, California, is among those critics who describe the widespread practice of "wish cycling" by consumers who unwittingly contaminate household recycling bins with items they assume to be recyclable.

A product is not recyclable if no one can recycle it, she said, warning of "putting the cart in front of the horse. They're making a better container that one day will be recycled. In the meantime, it’s going to the landfill."

The people behind GoGo Squeez and Gerber's pouches say they hope they're doing their part to advance better packaging solutions, while recognizing that the patchwork U.S. recycling system leaves much to be desired. One hope is that down the road, if more flexible polypropylene and polyethylene are available for recycling in these new types of formats, they would be collected at greater volumes. And if more plastics enter the market for upcycling purposes, that might spur investment in recycling infrastructure. It's a kind of chicken-versus-egg situation. In this case, the designs may come first.

"We're doing the piece we can do, we’re supporting the MRFF project, but we really need the system to come together," Dzikowicz said.