How do you upgrade the windows in one of the world's best-known buildings without altering the look of the structure or discarding its 26,000 panes of existing glass?

That was the challenge for green building materials manufacturer Serious Materials, which has devised a way to super-insulate the 6,514 double-hung windows in the Empire State Building and as much as quadruple their thermal performance -- an improvement that is expected to reduce energy costs by more than $400,000 a year.

Johnson Controls Inc., the efficiency solutions giant overseeing the greening of the Empire State Building, and Serious Materials formally announced this morning that the firm based in Sunnyvale, Calif., has been chosen to transform the windows in the New York City icon.

Serious Materials CEO Kevin Surace provided early word of his firm's involvement to the House of Representatives' Democratic Caucus in January and at the State of Green Business Forum last month in San Francisco. 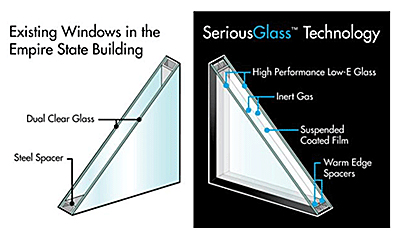 The windows project is one of eight major components in the retrofit that is expected to reduce energy use at the Empire State Building by 38 percent, save $4.4 million annually and avoid 105,000 metric tons of carbon dioxide emissions in the next 15 years.

Serious Materials' SeriousWindows and SeriousGlass are designed to deliver high-performance insulation and make the structures that use them more energy efficient. Applying technology used in making SeriousGlass, the company intends to convert the existing glass in the Empire State Building's windows into "super-insulating glass units" (a basic insulated glass unit, or IGU as its known in industry shorthand, is the glass sandwich that comprises a multiple glass pane).

Serious Materials' units for the Empire State Building will be made (see diagram above) by removing the glass from window frames, separating and cleaning it, then installing new spacers between the panes along with a suspended coated film and a special gas fill. Afterward, the units will be reinstalled in the existing window frames. When complete, the thermal resistance or R-value of the windows is expected to increase from R-2 to a range of R-5 to R-8.

"There's nothing greener than reusing existing glass," said Surace, who noted the windows now in the building are about a dozen years old.

The entire process, which Johnson Controls and Serious Materials described as the first of its kind, will save energy and reduce waste, Surace said. The work to convert the old glass will be done on site by crews who will remove and reinstall the glass at night to avoid disruption of dayworkers in the office building.

Although upgrading existing window glass has been done before, such a large-scale conversion has not, Surace said. "This is a great example of what you can do to save energy," he said. "This is a spectacularly fun project and we're extremely proud to be involved in it."

The work will take about nine months with completion expected by December, Surace said.

{related_content}Other details of the Empire State Building retrofit -- whose project partners include Jones Lang LaSalle, the Clinton Climate Initiative and the Rocky Mountain Institute -- are available at www.esbsustainability.com. Johnson Controls has guaranteed that all eight integrated measures to make the building more  energy efficient will provide a payback in three years.

NES's work has involved lighting upgrades and maintenance solutions primarily for retail, commercial and industrial clients. That business would expand the customer base for Johnson Controls' lighting services, whose clients have been school, healthcare and government facilities. The terms of the acquisition were not disclosed.