Smartphones are rapidly becoming ubiquitous, and there are ever-increasing ways for individuals to use them to make smarter shopping choices. But how do companies and governments decide the best ways to present their data to the public? Two unrelated news items in the last week highlight two different ways to help people on the move make greener decisions.

First, Clorox last week announced that it had developed at mobile application and website devoted to making it easier to see the chemical makeup of its products -- and what those chemicals do.

Clorox has published the previously secret ingredients information since 2008, when it launched the Green Works natural cleaning line of products; earlier this year the company added fragrance, preservative and dye information to its disclosure lists.

(It should be noted that companies that started out in the natural cleaners business have been disclosing their ingredients for much longer; Seventh Generation, for example, says it has shared its product ingredients since 1990.)

While Clorox's transparency in ingredients is a welcome shift in the industry, there's only so much benefit that a single-brand app can offer. In embracing the mobile market, Clorox is going up against a number of other players, most notably Good Guide, which offers health, environmental and safety information at a glance for thousands upon thousands of products -- including hundreds of Clorox products from their convetional brands as well as its natural lines, Burts Bees and Green Works.

Again, it's fundamentally important that companies like Clorox (or, say, every company) disclose the ingredients of their products. But to gauge the usefulness of Clorox vs. Good Guide, check out the two screen shots belows (you can click the images for larger versions). 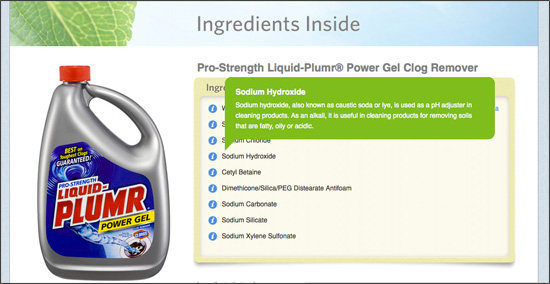 Next is the Good Guide listing for the same. 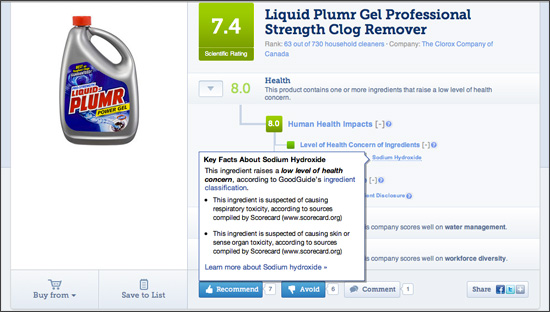 Clorox does indeed disclose all the ingredients that make up Liquid Plumr, but there is no discussion of the health or environmental impacts of those ingredients -- for that you have to either download the Material Safety Data Sheet listing [PDF] for Liquid Plumr, or conduct another search (for instance, on GoodGuide.com). Meanwhile, Good Guide gives you that information at a glance, as well as useful context for just how worried you should be about the impacts of a given product.

This is not to criticize Clorox for their well-intentioned effort, but rather to point out that there is already too much data in the world, and that perhaps joining forces with established players would achieve the same ends more quickly and thoroughly.

And speaking of too much data in the world, the second part of this story, from the U.S. EPA, looks at the flip side of the problem.

When it comes to gathering data, there are few groups that can match the EPA. The organization has always been a powerhouse of data gathering, budget cuts (and threats of abolishment) notwithstanding, with 1,541 discrete data sets available for download on Data.gov.

That data dump is not entirely to the EPA's -- or the public's -- benefit. Sorting and sifting through the raw data is a Herculean task, made all the worse but just how beneficial it is for individuals and communities to know about the air, water and soil pollution around them.

In an attempt at addressing this problem, the EPA last week -- coincidentally, on the same day as Clorox's announcement -- unveiled an Apps for the Environment challenge.

The contest is a sort of Tom Sawyering of eco-data: The EPA is urging developers to create new tools to make the masses of environmental data understandable and easily accessible to the iPhone-wielding masses.

The EPA has pointed out 30 of its top data sets involving anything from Superfund sites to toxic chemicals to green vehicle data. And the agency highlights 14 existing apps that use EPA data, three of which were developed by the EPA, and the rest of which are available on the iPhone app store.

The contest started last week and entries must be submitted by September 16. Winners of the contest will be announced on October 31 and will be honored by the EPA and promoted on the EPA website. There are no prizes beyond that recognition, but developers keep the rights to their apps, and thus will likely benefit from the promotion by the EPA.

The agency has also created a short video about the challenge, watchable below. More details are online at Challenge.gov. We'll be waiting to see if a "Good Guide for RCRA" emerges from the competition...