At the COP 21 climate convention in Paris at the end of 2015, leaders from 194 nations agreed to pursue actions that will cut greenhouse gas emissions enough to keep global warming within 1.5 degrees Celsius (2.7 degrees Fahrenheit) above pre-industrial conditions. Meeting this goal will avoid continued and increasing harm to people and ecosystems around the world caused by a changing climate, and it is also a great opportunity to turn the world into a place that embodies our collective and pluralistic values for the future. Nevertheless, there remains a notable gap between current trajectories of global GHG emissions and the reductions necessary to see COP 21’s goals realized.

Numerous technological and economic strategies for bridging that gap are being discussed, including transitions to renewable energy and/or nuclear power, carbon capture and storage, and cap and trade. However, many overlook the fundamental social issues that drive climate change: overconsumption; poverty; industrial agriculture; and population growth.

The root causes of climate change are not technologies such as coal power and industrialized, chemical-intensive agriculture, but the underlying social and cultural systems that created and locked people into these technologies.

As such, even if these strategies succeed in mitigating carbon dioxide emissions — renewable energies, for instance, seem to have achieved irreversible momentum — they leave unaddressed a second gap, a sustainability gap, in that they allow issues of ecological overshoot and social injustice to persist. We argue that there is an opportunity to reverse climate change by attending to these sustainability issues, but it requires that we reject the convenience of technological optimism and put aside our fears of the world’s "big" social problems.

In 2004, Stephen Pacala and Robert Socolow wrote in Science that it is possible to address climate change by breaking the larger problem of CO2 emissions down into a series of more manageable "wedges." They offer 15 solutions based on existing technology, including nuclear energy, coal carbon capture and storage, energy efficiency, and increased adoption of conservation tillage, for mitigating climate change one wedge at a time.

Their pragmatic approach to the problem has been popularly received, as evidenced by the thousands of citations that the paper has received. However, their approach also can be critiqued for glossing over the immense costs involved and for its piecemeal and top-down nature. In other words, they assume that this complex global environmental problem can be fixed with a handful of standardized solutions.

Climate change is just one of many related sustainability problems that the world faces. In addition to rising atmospheric CO2, we are approaching or already have exceeded multiple other planetary boundaries — such as fresh water, nitrogen, phosphorus and biodiversity loss — that CO2-mitigating technologies cannot solve. Solving climate change on its own would require immense investments but leave too many other problems unaddressed. That is not to say that these technological innovations are irrelevant; Pacala and Socolow’s desire to break down the challenge into manageable pieces is both valid and appreciable. What’s missing from their assessment is the fact that the world is a complex system, and systemic problems require systemic solutions.

A systems approach to solving problems requires that we look to root causes and seek interventions that change patterns of outcomes. The root causes of climate change are not technologies such as coal power and industrialized, chemical-intensive agriculture, but the underlying social and cultural systems that created and locked people into these technologies through unsustainable patterns of consumption, growth and inequity.

It is possible to address other environmental and social issues and climate change together.

Consider the issue of empowering women. We know population growth is at the epicenter of global overshoot; programs that empower women by creating equitable employment and education opportunities and recognizing their reproductive rights consistently lead to voluntary regional declines in population growth rates. Countries in which women have higher political status also emit less CO2 per capita.

While empowering women may seem to many people to be an immense and somewhat intangible goal, successes have been made through small-scale economic and policy interventions that give women access to land and other capital. Communities that empower women also become more resilient and adaptable to challenges such as environmental change.

We are not arguing against technology reform. We are arguing that climate change is not, fundamentally, a technological problem.

Or, consider the potential of transitioning agriculture and other land management systems away from industrial practices and toward agroecological ones. Agroecological systems of food production allow smallholders to improve food security while increasing household income potential. Olivier De Schutter, a former U.N. special rapporteur on the right to food, has argued that agroecological food production could double food production in 10 years while also mitigating climate change through reductions in fossil fuel inputs, sequestering carbon in soil and alleviating rural poverty in developing nations.

In "Grass, Soil, Hope," author and rancher Courtney White similarly describes a portfolio of small-scale land management changes that add up to global impacts for carbon mitigation. Others repeatedly have shown that agroecological methods of land management and food production are at least as effective, if not more effective, than increased industrial intensification from the perspective of meeting human needs and protecting biodiversity.

Also, decreases in meat consumption — another strategy for addressing climate change — necessarily will accompany agroecological reforms, because these modes of production simply do not produce meat in the same unsustainable quantities as industrial agriculture. It stands to reason that as people increasingly see the social and ecological benefits of alternative farming practices and choose to participate, their meat-eating habits will decline.

Finally, as these reforms address food security and hunger, population growth also will be reduced, because these are among its primary drivers. These are yet more examples of how thinking about the problem from a whole systems approach can yield solutions that seem small but, through feedbacks and interactions, ultimately can accumulate to significant gains.

Other strategies include moving to decentralized energy generation and changing home-size preferences in the developed world. What they all have in common is that they attend to social and behavioral aspects of the problem. And rather than being piecemeal, such solutions can work together synergistically. For example, agroecological transitions at the community level have emerged as a successful venue for empowering women.

Too big, too wicked

A common critique of our argument is that problems such as empowering women and consuming meat are simply too big, too wicked, too complex to solve. This is, however, a psychological hang-up (PDF) that is not backed up by evidence.

The power of small-scale change, whether through incremental and place-based intervention or relatively innocuous "nudges," is increasingly evinced in ongoing social change, including around issues such as empowering women and meat eating. Additionally, psychological research suggests that people are generally more comfortable with small-scale change than they are with large-scale reform, which is salient in this age when environmental problems and their possible solutions are so heavily politicized.

It is worth noting that for place-based solutions, the question of scalability is somewhat different from technological fixes: Place-based strategies are rarely intended to scale in a uniform or industrial way. Rather, they scale in a more cultural sense, to create a heterogeneous landscape of solutions that are similar in philosophy but often quite different in implementation.

In general, while social change is generally a slow process that happens through learning and innovation, research has shown that simple, incentive-based interventions through subsidies or taxes can encourage people to switch from one behavioral regime to another without the need for a fundamental change in their values. For instance, studies have shown that small taxes and increased knowledge about health risks both drive decreases in meat consumption.

Many of today’s most widely debated solutions to climate change fall into a category that emphasizes technological optimism and top-down, engineered solutions. The strategies we highlight here largely fall into another category: solutions that emphasize place-based, social and behavioral innovations. We are not arguing against technology reform. We are arguing that climate change is not, fundamentally, a technological problem.

To be sure, social problems are not easy to solve, but neither are they intractable, unless viewed only from a global, one-size-fits-all perspective. If we use the tools of social innovation alongside technological innovation and embrace a socially focused and place-based approach to our global climate change and sustainability challenges, we will be far better off for it. 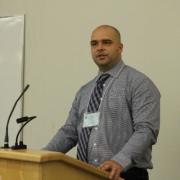 See all by Martin Boucher