This Texas port city is a big fan of wind logistics

Have you ever seen a wind turbine blade up close?

Few things capture the ingenuity of humans more than the sheer size of wind turbines. They look like toys on hillsides from freeways and planes. Yet if you’ve ever seen one at close range, it’s actually difficult to comprehend.

An entire industry is dedicated to manufacturing and transporting wind turbines around the world.

One piece in the logistics chain: ports. I spoke to representatives from the Port of Brownsville, Texas, to better understand that piece of the puzzle.

Brownsville isn’t a large port — it’s in the bottom quarter of ports size-wise — but it has positioned itself to be an importer of wind components. The attributes of the port that make it well-suited for onshore wind turbines illustrate how complicated logistics are:

Over the last few years, wind turbines have become a major part of Brownsville’s business.

"This is going to be our best year ever," said Steve Tyndal, senior director of marketing at the Port of Brownsville. The port has three times the number of projects on the books this year than last — going from four to 12, each of which can include anywhere between 40 and 70 turbines.

Brownsville isn’t the only port tapping into the wind market. On the east coast of Texas alone, the ports of Houston, Galveston and Corpus Christi import wind components. Yet the growing market has opened new business opportunities to ports that are up for the challenge.

"We’ve been able to grow with the industry," said Eduardo Campirano, port director and CEO at Brownsville. "The port’s reputation to be able to handle this, to store this and make it work, has resulted in more business coming our way." 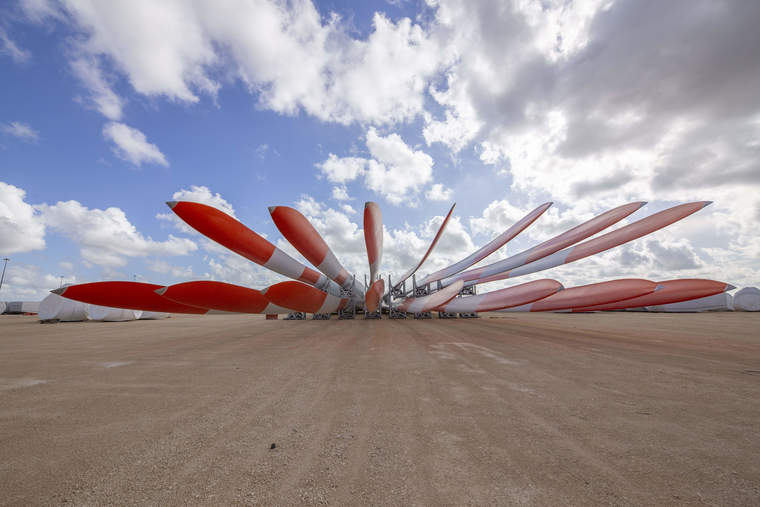 The size of a single blade is 280 feet — about the same size as seven shipping containers, or a little less than a football field.

The size of a single blade is 280 feet — about the same size as seven shipping containers, or a little less than a football field. The sheer size requires jumbo logistics.

"It’s a team effort," Campirano explained. "The port’s part is getting it from the vessel to the dock, then providing enough space to position all this equipment so it’s ready to go out."

To accommodate this, the Port of Brownsville has 61 acres to stage and store wind turbine components.

Most blades are then transported by truck. To accommodate the size, logistics companies work with the U.S. Department of Transportation to certify routes to avoid overhead obstructions — such as traffic signals, signs and electric lines — and avoid turns that would be too tight.

"The people who look at these routes, they may be looking at delivering these things 150 miles away, and they know every turn they’ll take," Campirano said.

The other option is to take the component by train. In those cases, a single blade stretches across three railcars. 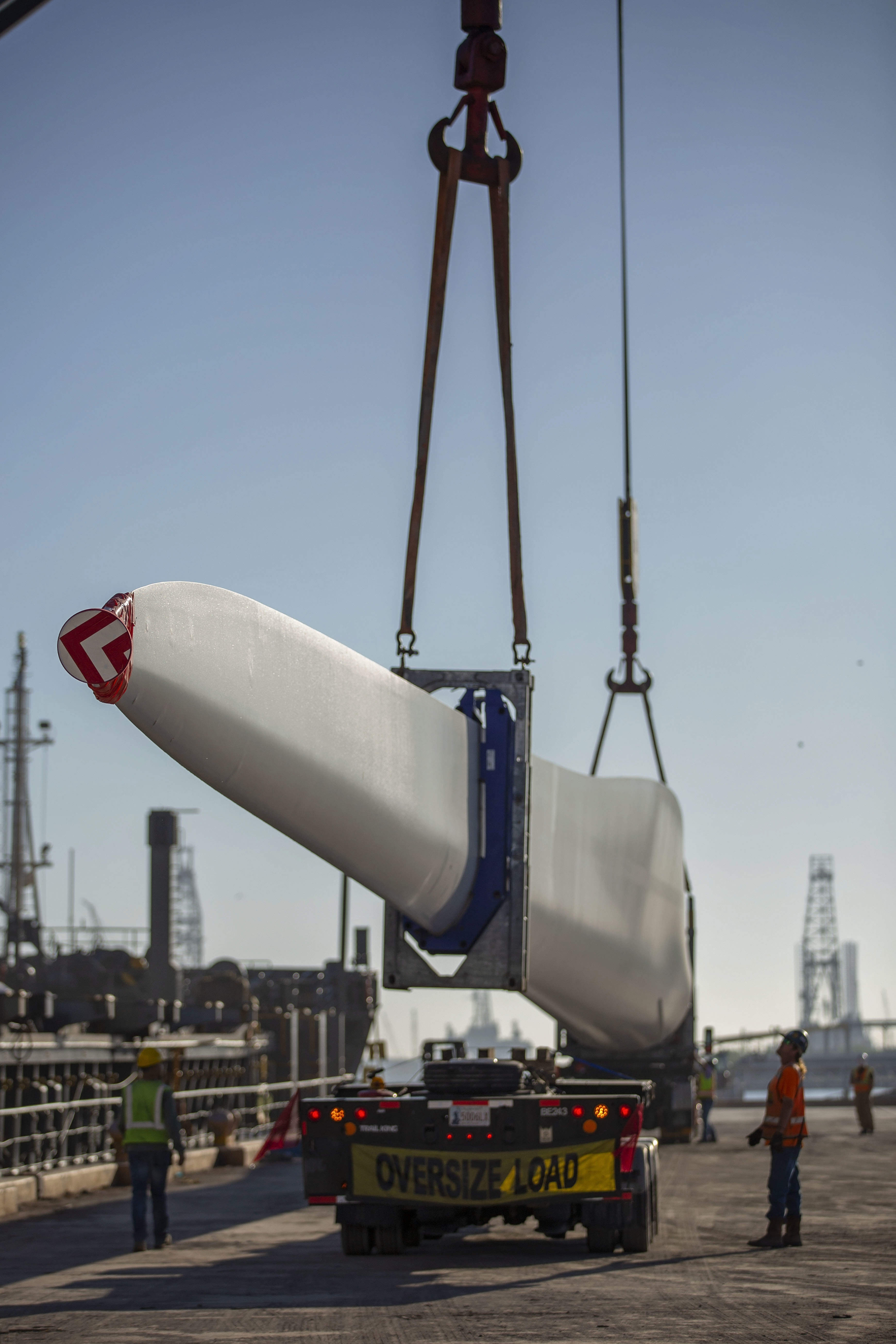 Wind turbines are getting bigger

For wind turbines, bigger is cheaper.

In 2018, the average capacity of a turbine was 2.4 megawatts, about 2.5 times larger than in 1999. The jump in capacity is thanks to two factors: the blades are longer to cover a wider area; and the tower is taller to catch more wind. Today’s windmills are 57 percent taller on average than those 20 years ago.

Campirano has noticed this firsthand.

"What we’ve noticed over the course of time that everything is getting bigger and bigger," he said. "When we started we thought, ‘Wow, these are big!’ Now they’re really, really big."

Offshore wind installations popular in Europe and picking up speed in the U.S. boost even larger sizes. Those projects are able to sidestep many logistical challenges the Port of Brownsville has worked to solve as, by definition, the components don’t need to travel inland. 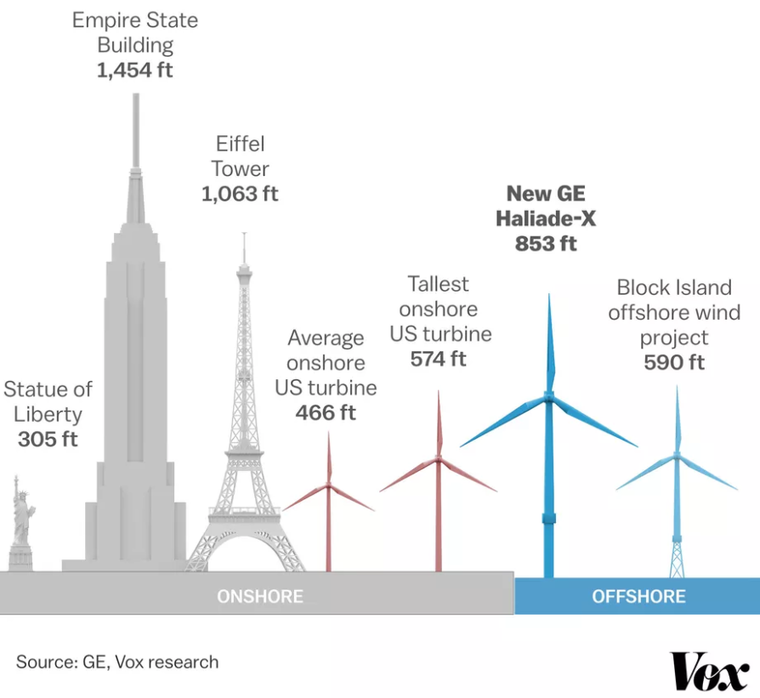 Thanks to the falling cost of wind energy (the cost for newly built projects has dropped to less than 2 cents per kilowatt-hour, making it competitive with any generation source), wind deployments increased 431 percent between 2007 and 2017. And deployments are on the rise: the first three quarters of 2019 each broke the previous record for U.S. wind installations. There are more than 100 gigawatts of wind capacity in the U.S., with over a quarter located in Texas.

Also pushing the boom may be the expiration of the federal Production Tax Credit, which incentivizes wind deployment and is set to expire at the end of 2020.

The increase in deployment is opening up new opportunities for ports. While the U.S. wind manufacturing sector is strong (it employed (PDF) 114,000 full-time workers in 2018), it is reliant on imports. About half of blades and hubs are imported, as well as a quarter of towers.

Ports on the east coast are racing to gain the needed competencies to tap into the burgeoning offshore wind market, which promises to offer a new source of revenue.

When developers settle on a port of entry, I’ll be there to gawk at the mind-bendingly large components and marvel at the wonder that is renewable energy innovation.

A Holistic Solution to the IT Energy Crisis