This is an excerpt from "FALTER: Has the Human Game Begun to Play Itself Out?" (Macmillan, 2019) by Bill McKibben.

If you viewed Earth from far above (and for better or worse, this book will often take a high, wide perspective), roofs would probably be the first feature of human civilization you’d notice. A descending alien would see many shapes, often corresponding to the local weather: A-frames for shedding snow, for instance. There are gambrel roofs, mansards, hipped and gabled roofs. Pagodas and other Asian temples often sport conical tops; Russian churches come with onion domes; Western churches sit beneath spires. 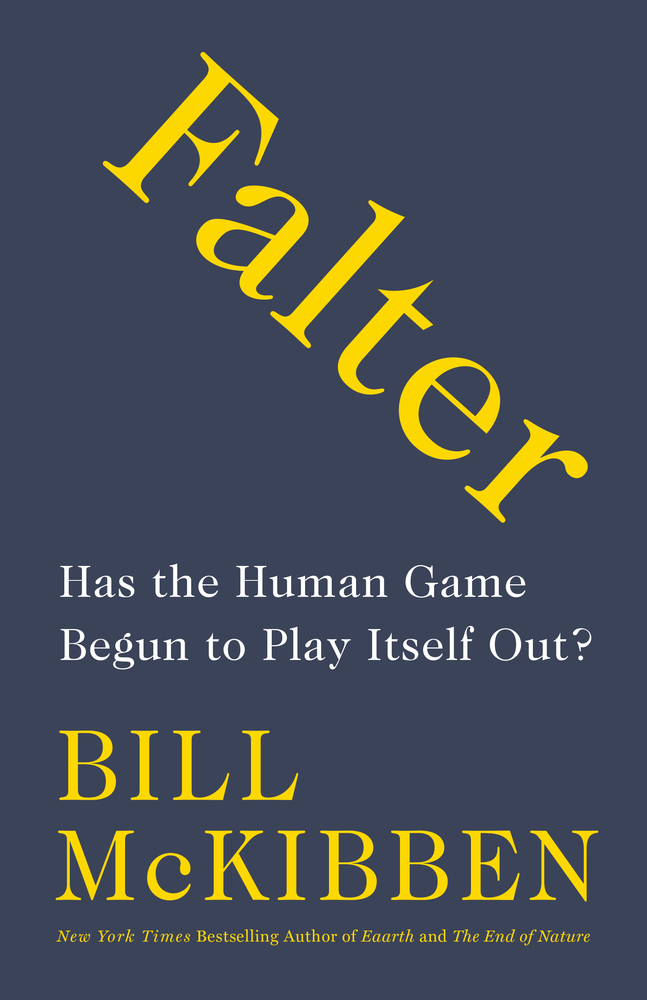 Palm leaves probably topped the earliest houses, but as humans began to grow grain in the Neolithic era, the leftover straw became a reliable roofing material. Some homes in Southern England have thatch roofs 500 years old; new layers have been added over centuries till, in some cases, the roofs are 7 feet thick. Though it is harder to find good stuff to work with — the introduction of short-stemmed wheat varieties and the widespread use of nitrogen fertilizer have weakened straw — thatch is now growing more popular with rich Europeans looking for green roofs; in Germany, for instance, you can now get a degree as a "journeyman specialist thatcher." But at least since the third century B.C. (perhaps beginning with Greek temples deemed valuable enough to protect from fire) humans have been tending toward hard roofs. Terra-cotta tiles spread rapidly around the Mediterranean and to Asia Minor; slate roofs became popular for their low maintenance; where trees are plentiful, wood shakes and slabs of bark work well. Given that the average human being currently resides in an urban slum, it is possible that corrugated iron shelters more sleepers than anything else.

Do you find this a little dull? Good. What I want to talk about is the human game — the sum total of culture and commerce and politics; of religion and sport and social life; of dance and music; of dinner and art and cancer and sex and Instagram; of love and loss; of everything that comprises the experience of our species. But that’s beyond my powers, at least till I’m warmed up. So, I’ve looked for the most mundane aspect of our civilization I can imagine. Almost no one thinks about her roof from one year’s end to another, not unless it springs a leak. It’s a given. And so, it will illustrate my point — even the common and boring roof demonstrates the complexity, the stability, and the reach of this human game.

Consider the asphalt shingle, which tops most homes in the West and is itself, doubtless, the dullest of all forms of roofing. The earliest examples date to 1901, and the first manufacturer was the H.M. Reynolds Company of Grand Rapids, Michigan, which sold its product under the slogan "The Roof That Stays Is the Roof That Pays." Asphalt occurs naturally in a few places on Earth — the tar sands of Alberta, for instance, are mostly bitumen, which is the geologist’s word for asphalt. But the asphalt used in shingles comes from the oil-refining process: it’s the stuff that still hasn’t boiled at 500 degrees Fahrenheit. Vacuum distillation separates it from more valuable products such as gasoline, diesel and naphtha; it then is stored and transported at high temperatures until it can be used, mostly for making roads. But some of it is diverted to the plants that make shingles, where manufacturers add granules of some mineral (slate, fly ash, mica) to improve durability. The CertainTeed Corporation, the world’s biggest shingle manufacturer, has produced a video showing what it rightly calls "this underappreciated process" at its plant in Oxford, North Carolina, one of 61 facilities it operates around the country. The video shows a ballet of pouring and dumping and conveying, as limestone arrives by rail car to be crushed and mixed with hot asphalt and then coated onto hundreds of thousands of miles of fiberglass mat. A thin mist of water is sprayed, and as it evaporates, the sheet cools, ready to be cut and then bundled onto pallets in a giant warehouse, to await distribution.

Marvel for a moment at the thousands of events that must synchronize: the oil drilled; the pipelines and rail lines laid; the refineries constructed (and at each step, the money raised).

Marvel for a moment at the thousands of events that must synchronize for all this to work: the oil drilled (maybe deep undersea, or in the equatorial desert); the pipelines and rail lines laid; the refineries constructed (and at each step, the money raised). The limestone and the sand need mining, too, and the miles of fiberglass net must be fabricated on some other production line. The raw materials are all sucked into the North Carolina factory, and then the finished shingles must be spewed back out again, across rail lines and truck routes and into a network of building supply stores, where contractors can haul them to building sites, confident that they’ve been rated for resistance to wind, fire and discoloration. Think, again, of the sheer amount of human organization required for the American Society for Testing and Materials to produce directive D3462-87 ("Asphalt Shingles Made from Glass Felt and Surfaced with Mineral Granules") and then to enforce its mandates.

We could, clearly, repeat this exercise for everything you see around you, and everything you hear, and everything you smell — all the infinitely more interesting activities always underway beneath all those roofs. As I write, for instance, I’m listening to Orchestra Baobab on Spotify. It was the house band at a Dakar nightclub in the 1970s, where its music reflected the Cuban beats that came with sailors to West Africa in the 1940s; eventually the group recorded its best album at a Paris studio, and now it somehow resides on a computer server where 196,847 people from across the planet listen to it each month. Try to parse the play of history and technology and commerce and spirituality and swing that make up the sound pouring into my headphones — the colonialisms layered on top of one another; the questions of race, identity, pop, purity. Or consider what I’m going to have for dinner, or what you’re wearing on your back — everything comes with strings attached, and you can follow those strings into every corner of our past and present.

What I’m calling the human game is unimaginably deep, complex and beautiful. It is also endangered. Indeed, it is beginning to falter even now.

I think it’s best to begin by stressing not the shakiness of the human game but, instead, its stability.

I’ll spend this book explaining that danger and, at the end, pointing to some ways we might yet avert it. But I think it’s best to begin by stressing not the shakiness of the human game but, instead, its stability. For humans, all of us together, have built something remarkable, something we rarely stand back and simply acknowledge. The sum of the projects of our individual lives, the total of the institutions and enterprises we have created, the aggregate of our wishes and dreams and labors, the entirety of our ceaseless activity — it is a wonder. I call it a game because it has no obvious end. Like any game, it doesn’t really matter how it comes out, at least in the largest sense of Our Place in the Universe, and yet, like any game, it absorbs the whole concentration of those involved. And even if it has no ultimate aim that doesn’t mean it lacks rules, or at least an aesthetic: by my definition, the game is going well when it creates more dignity for its players, and badly when that dignity diminishes.

Dignity, in the context of the human game, can be measured in many ways: enough calories, freedom from fear, clothes to wear, useful work. And by plenty of those measures, we’re on a roll. Extreme poverty (life on $2 a day or less) is far rarer than it used to be. Many of the diseases that poverty helped spread have lessened, too: worms in your gut, say. Even compared to the 20th century, violence is now far less likely to kill us — of the more than 55 million people who died around the world in 2012, war killed just 120,000 of them. Eighty-five percent of adults can read now, a staggering increase inside two generations. Women, with more education and at least a modicum of equality, have gone from having more than five kids apiece on average in 1970 to having fewer than 2.5 today, probably the most rapid and remarkable demographic change the planet has ever witnessed. In the year 1500, humans managed to produce goods and services worth $250 billion in today’s dollars — 500 years later, that number is $60 trillion, a 240-fold increase. The chorus of affirmation swells, from Steven Pinker insisting we’re in an age of unprecedented enlightenment to Donald Trump tweeting, "There is an incredible spirit of optimism sweeping the country right now — we’re bringing back the JOBS!"

We’re quite accustomed to this idea of progress, so accustomed that some can’t imagine anything else: the former chief economist of the World Bank, Kaushik Basu, recently predicted that, in 50 years, global GDP will be growing 20 percent a year, meaning that income and consumption will be doubling every four years or so. There are, each day, more ideas hatched, more songs sung, more pictures taken, more goals scored, more schoolbooks read, more money invested.

And yet. There are other authorities almost as highly placed as the former chief economist of the World Bank. Pope Francis, in his landmark 2015 encyclical on the environment and poverty, said, "The earth, our home, is beginning to look more and more like an immense pile of filth." Don’t consider popes sufficiently authoritative? Consider this: In November 2017, 15,000 scientists from 184 countries issued a stark "warning to humanity." Just like Pinker, they had charts, but theirs depicted everything from the decline in freshwater per person to the spread of anaerobic "dead zones" in the world’s seas.

As a result, the scientists predicted, we face "widespread misery and catastrophic biodiversity loss"; soon, they added, "it will be too late to shift course away from our failing trajectory." (Within six months, that warning was already the sixth-most-discussed academic paper in history.) The worries have grown severe enough that a NASA-funded group recently created the Human and Nature DYnamics (HANDY) program to model the fall of the Roman, Han, Mauryan and Gupta empires, and when they pushed the button, it spit out a disquieting forecast: "Global industrial civilization could collapse in coming decades due to unsustainable resource exploitation and increasingly unequal wealth distribution." (The fact that I’d never even heard of the Mauryan Empire gave me a quiet shiver.) In this model, by the way, one of the greatest dangers came from elites who argued against structural change on the grounds that "so far" things were working out. 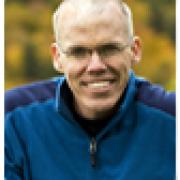