Architect Ruurd Gietema lives in the Netherlands, a country perennially trying to hold back the sea. He said his homeland has paid a price for the high dikes and tall dunes it built to thwart rising waters and prevent flooding.

"Protection was a high priority, but landscapes were erased," Gietema said.

This fact is not lost on today’s architects and urban planners, who are thinking about how to protect other cities from more intense rainfall and rising seas. Their aim is to build flood-resilient structures that don’t destroy the landscape but preserve it — not just in the Netherlands, but around the world.

"Instead of working against nature, we’ve begun to work with it," said Gietema, who is from Rotterdam. He and many of his colleagues are thinking hard about how best to adapt to a world beset by climate change, how they might protect cities against worsening weather while also conserving nature. 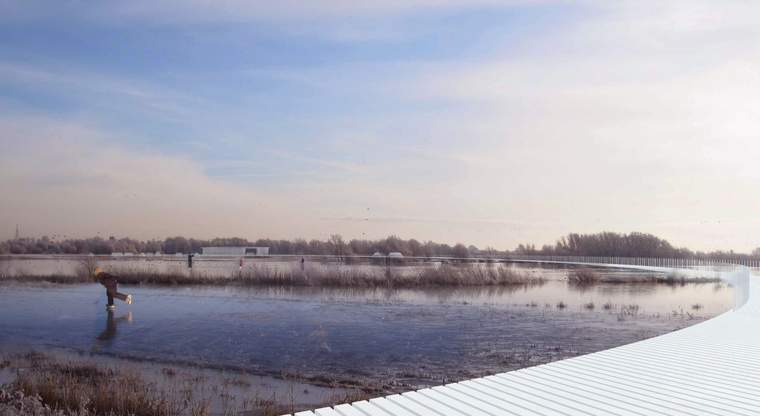 White Arkitekter Oslo
Architects have proposed building wooden walkways instead of concrete paths near waterways in Quebec City to allow floodwater to sink into the earth.

"The biggest thing that has changed for us is our time perspective," said Rebekah Schaberg, an urban planner with the Oslo office of White Arkitekter, an architecture firm. "We are thinking more ahead, much more in the 30-to-50-year perspective. That’s not how we thought 10 years ago." Today, she said, "We are designing for the future of our cities, even for humanity."

The latest wave of architectural innovations is the focus of a new exhibit, "Sea Change," at London’s Roca Gallery. It features flood-resilient projects from around the world, some that were recently finished and others that are just getting underway.

For example, Gietema, owner of the design firm KCAP, and Michiel van Driessche, a partner at landscape architecture firm Felixx, collaborated on a system of dikes built to protect Dapeng, a mountainous peninsula near Hong Kong that was hit hard by Typhoon Mangkhut in 2018. 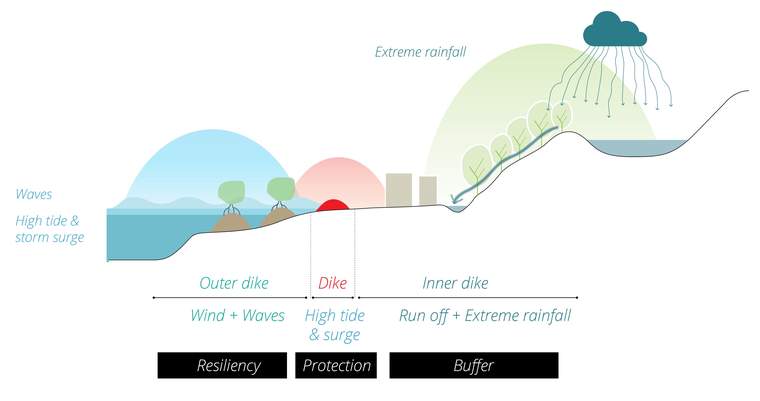 KCAP + Felixx
The system of dikes being installed in Dapeng, China.

The multilayered system, expected to be completed in 2021, features a seaside dike designed to slow waves, reduce erosion and protect sea life. A second dike further inland is a bulwark against storm surge, while a third dike even further afield channels rainwater cascading down the mountains into gardens, parks, forests and wetlands.

"Building a continuous protection wall would disturb the diversity of the green environment and abolish the close relation of the villages with the sea," van Driessche said. 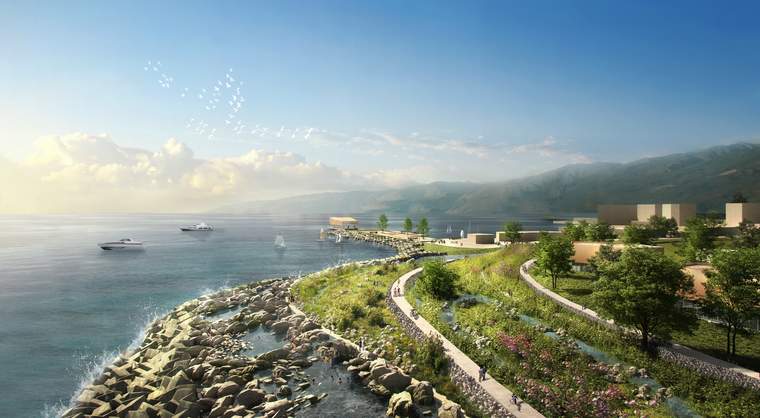 The architects looked to nature for help keeping floods at bay. They proposed adding coral reefs in deeper waters and mangrove forests in shallower waters, Gietema said, adding, "These also soften the waves and allow people who live in the local communities to fish."

Schaberg’s work also was featured in the exhibit. In 2013, her firm drafted a plan to remake the Oslo waterfront, an industrial zone, into a hub of shops and restaurants with the Oslo Opera House as its centerpiece. Oslo sits at the end of a long fjord, and the remade waterfront, known as the Havnepromenade, marks its terminus.

"It’s become a big asset for the city. It’s reconnected the city and the people to the fjord," she said.

However, in recent years the Havnepromenade has faced a critical challenge. Several rivers drain into the fjord near the waterfront, leaving it vulnerable to floods, which have grown more severe over the last 10 years thanks to heavy rainfall. Furthermore, a report (PDF) by the Norwegian Centre for Climate Services predicts that by 2100, Norway could see 18 percent more precipitation, resulting in more frequent and intense rainfall.

"This has caused design challenges and often makes the public space along the waterfront unusable for days at a time," Schaberg said. The rivers are currently diverted into concrete pipes, which empty directly into the fjord along the waterfront. The project team proposed doing away with the concrete pipes, letting the water flow along dirt or gravel river beds — permeable surfaces that allow water to be absorbed into the earth, slowing the flow of the river.

She and her colleague, architect Jenny Mäki, also put together a plan to reconnect the inhabitants of Quebec to its four tributary rivers by transforming the watershed — a bowl-shaped landscape that channels rainfall and snowmelt to creeks, streams and rivers — into an urban park.

White Arkitekter Oslo
A rendering of mussels suspended from the bottom of a floating restaurant on the St. Charles River in Canada.

The plan calls for opening covered waterways, reintroducing local plants on the riverbanks and installing wooden walkways and gravel paths instead of paved surfaces. It also proposes a floating seafood cafe on the St. Charles River, the city’s most polluted waterway, and using mussels as a natural filter to clean the water. The plans also suggest building "floating campgrounds" on the Pont Rouge River.

"‘Let the water in’ became the motto for this river," she said. "By floating new little covered platforms in the river, we could offer year-round camping and recreational facilities which are resilient to changing water levels."

Their proposals won second place in a 2017 design competition sponsored by the city, and the architects have been invited back to Quebec to discuss how the city can put the plan in action.

Another way to cope with high water is to live on it. The Dutch have embraced the concept of floating communities, building houses directly on the water.

Floating Houses IJburg in Amsterdam, designed by Marlies Rohmer Architects & Urbanists, is one such community. Each home is connected to two steel poles that keep it from moving side to side, but all rise up and down with the water level. 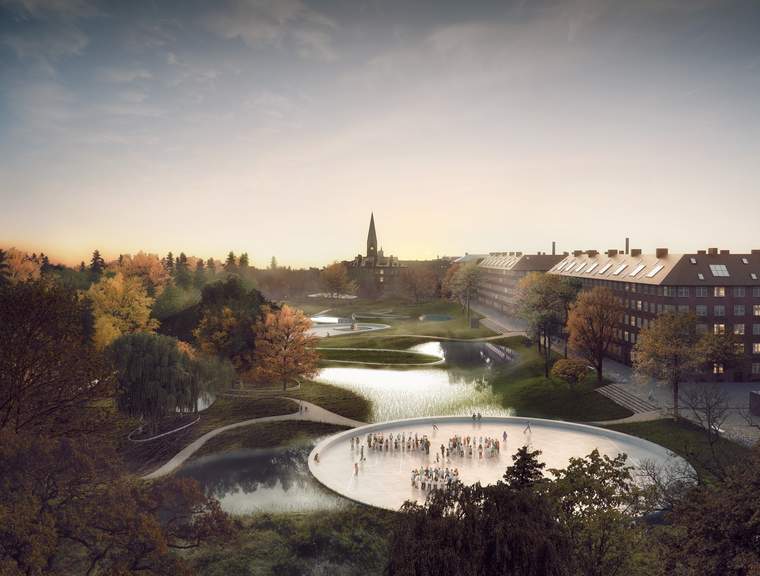 Beauty and The Bit
The plan for Hans Tavsens Park in Copenhagen.

Other architects are using parks, wetlands or pools of water to absorb floods. Architectural firm SLA sketched a plan for Hans Tavsens Park in Nørrebro in Copenhagen to deal with the sudden, violent rainstorms that bedevil the city. SLA designed the park to collect rainwater and funnel it through to Copenhagen’s lakes. It is slated for completion in 2023.

"The problem is not water," the firm’s founder and creative director, Stig L. Andersson, said in an email. "The problem is the way we build and develop urban societies, infrastructure and energy production, where we work against nature rather than cooperate with it. We are creating new nature, not a traditional conventional park. And new nature is an ongoing process of changes. The maintenance of a new nature in the city follows the roles of nature, the order of nature — not the order of architecture."

Cities are finally treating water as a resource, not a nuisance