A wise man once said, "I'll wear your granddad's clothes. I look incredible. I'm in this big (bleep) coat. From that thrift shop down the road."

He intended simply to buy on the cheap; he only had $20 in his pocket. But what this man didn’t realize — and really did anyone? — back in the year 2012 was that his appreciation for secondhand flannel zebra jammies made him a circular economy pioneer.

As we head into 2020, we’ve all become more aware of the monstrous mess our take-make-waste consumerism has created and the need to transition from a linear, disposable economy to one that reuses resources in the cleanest, most efficient way possible. Whether it’s billions of tossed plastic cups or billions of tons of discarded clothes, the exact unfathomable numbers hardly matter anymore — Mother Earth is choking on garbage, not to mention greenhouse gas emissions and filthy water. And online shopping is only making it worse.

Companies large and small know how unsustainable this model is and some have begun to do something about it, in part because their customers have demanded they do something, and in part because when companies repair and refurbish used merchandise, they make money. And not by reselling your granddad’s clothes.

Today’s burgeoning recommerce and online rental markets offer high-end gadgets and swanky fashion. Never before has it been so easy to purchase a refurbished iPhone or a secondhand pair of Jimmy Choo pumps, for cheap. Not into it? You can also buy a T-shirt. Or not own stuff at all.

Many companies participate in the reuse movement. I narrowed down who I chose to highlight by focusing on startups, because I like startups. The following list comprises a mix of innovative, young companies across the electronics, apparel and packaging industries. They’re at various stages of development — somewhere between a great idea and the road to world domination — but they’re all promising enough to have significant financial backing.

Inevitably, equally promising competitors will be left off the list, as it’s impossible to include everyone, but I want all the innovators making the reuse movement possible to know that you are all (bleeping) awesome. In fact, you’ve inspired my New Year’s resolution — 2020 will be all about secondhand clothes and reusable shampoo bottles for me.

Happy New Year to all, and see you at the thrift shop, babies! 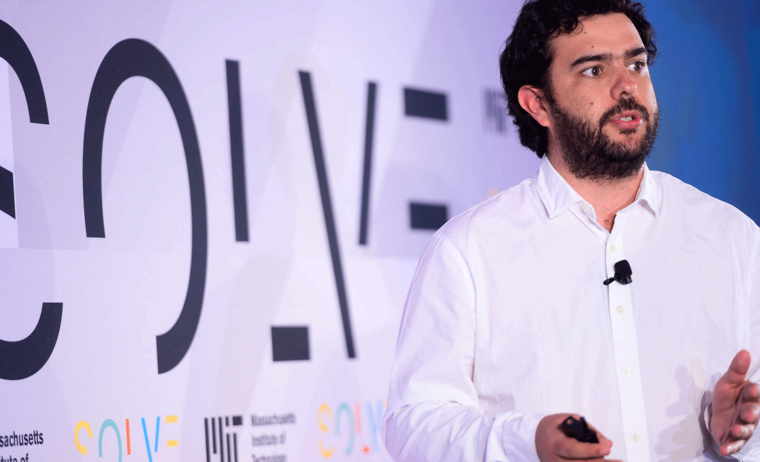 Bulk goods startup Algramo is taking the single-use packaging fight to the grocery store. The Chilean company sells basics, from rice to laundry detergent, in reusable containers and "by the gram" (hence the name Algramo), a system that not only eliminates single-use but significantly reduces costs for brands and consumers alike.

Cutting costs for low-income shoppers was one of founder José Manuel Moller’s main objectives when he created the company in 2013. Often called a "poverty tax," packaging typically increases an item’s price by 30 percent to 50 percent, a cost burden disproportionately borne by low-income consumers, who tend to buy goods in small quantities.

Over time, Algramo’s system has expanded to around 2,000 bodegas in Santiago, and the reuse rates by customers have risen from around 10 percent to more than 80 percent, the company says. Through partnerships with big brands such as Unilever and Nestlé, Algramo has begun targeting middle-income shoppers and is poised to expand into the United States in 2020. The expansion is being financed with a Series A round — amount undisclosed — led by circular economy investor Closed Loop Partners.

Paris-based Back Market aims to provide consumers with an ecological and economical alternative to buying new electronics. The startup’s recommerce platform helps shoppers find and buy refurbished devices and appliances for as much as 70 percent off their original prices.

After sales topped $120 million in 2017, Back Market expanded into the United States in 2018. That year, the company raised $48 million in a second round of funding from leading European venture capital firms. To continue to change the minds of French consumers, many of whom remain skeptical about the quality of refurbished smartphones, Back Market recently teamed up with French creative agency Marcel for a new advertising campaign, which borrows from Apple's "Shot on iPhone" campaign. 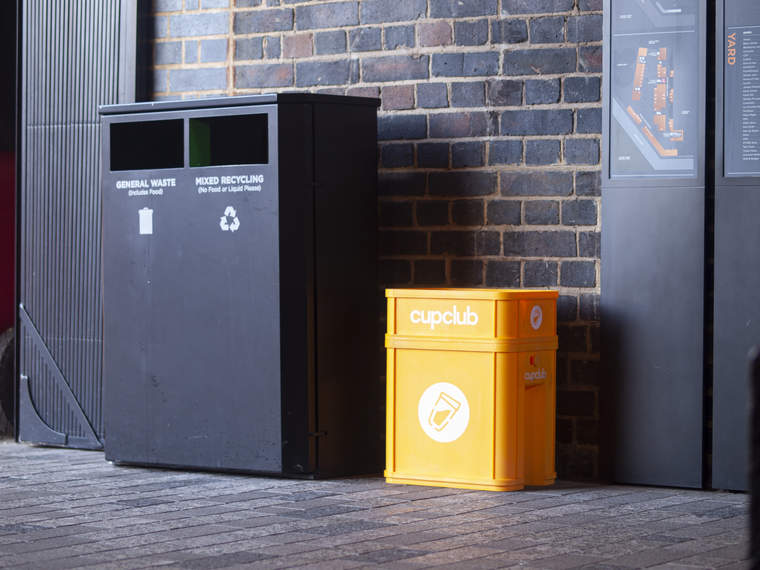 Where do I even start with the disposable cups? They are a menace that must be stopped. Luckily, a slew of fresh-faced startups aim to defeat this garbage monster, including the 12 winners of the NextGen Cup Challenge — a global innovation challenge to redesign the coffee cup.

One of those 12 was CupClub, a London-based service that supplies reusable cups for hot and cold drinks to coffee shops and other businesses, so java connoisseurs don’t have to remember to cart around a cup of their own.

Each cup, which can be used 132 times, is fitted with electronic identification, so CupClub can track current and past usage. Once a cup has reached its end of life, it can be broken down and upcycled. Founder Safia Quereshi launched CupClub in August 2018 with the startup’s first partner, commercial real estate group Cushman & Wakefield, which piloted the service at university and office cafes. In February, the company announced it had closed a $460,000 pre-seed round of financing to drive its expansion across London.

Grover has been disrupting Germany’s consumer electronics market with its monthly rental subscription model and is poised to take on the rest of Europe. Founded by Michael Cassau in 2015, the Berlin-based startup specializes in pay-as-you-go technology rentals of laptops, smartphones, games, cameras and the like.

One of the fastest-growing startups in Germany, Grover has a customer base of more than 300,000 registered users and representation in 500 German electronics retail stores. The company recently raised $45.7 million through a pre-Series B financing that will fund its expansion into several thousands of stores across the continent. The new funding follows a Series A round of $41 million, led by Edinburgh-based private equity firm Circularity Capital in July 2018, bringing the company’s total financing volume to more than $110 million.

A growing number of online services allow shoppers to "rent" clothes, but seeing as my husband still owns T-shirts from 1997, I’m particularly excited about For Days. Cofounders Kristy Caylor and Mary Saunders launched their circular T-shirt brand as a membership service in May 2018, with the idea that you never really "own" the shirt.

Customers pay a monthly membership fee, wear For Days shirts as long as they like, then exchange the worn garment for a new one. The company recycles returned shirts by breaking them down into pulp, which is then blended with fresh organic fiber and spun into yarn, which it uses to make new shirts at its Los Angeles factory.

I’m not the only one intrigued — just six months after launch, For Days announced it had raised $2.8 million in seed funding from investors. The company is just getting started, but so far, it claims its closed-loop system has kept 1,500 pounds of clothing from the garbage heap.

By giving damaged and used clothing a second life, The Renewal Workshop is working to reduce the fashion industry’s shocking environmental footprint while helping apparel brands increase profits and customers save cash.

The Oregon-based startup operates secondhand clothing programs for brands, such as Pearli Izumi, Osprey, Timbuk 2 and The North Face, managing the collection, renewal and sales of damaged and used garments. Along with its own site, the company runs the backend of brand specific recommerce sites, such as The North Face Renewed.

Co-founders Nicole Bassett and Jeff Denby built The Renewal Worshop’s first facility in 2016, and just this month, the company announced its expansion into Europe, with the opening of a facility in Amsterdam, paid for with $5.5 million in Series A financing led by Europe’s Social Impact Ventures, SHIFT Invest and Quadia. 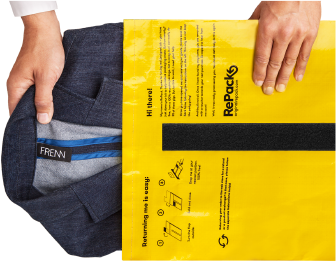 A sample of RePack's reusable packaging.

Finland’s RePack is tackling e-commerce’s enormous waste problem with its nifty reusable packing. Made of durable, recycled materials, the company’s packages replace all the cardboard and plastic our online orders are typically wrapped in.

The packages come in three adjustable sizes and are designed to fold into a letter size when empty, so customers can return them via post from anywhere in the world. When the package is returned, shoppers typically get a discount on their next purchase, which increases sales for retailers.

RePack began as a sustainable design agency founded by Jonne Hellgren in 2011. While working on a project with the post office, the startup’s crew saw all the single-use packaging being created by the burgeoning e-commerce industry, and designer Juha Mäkelä had an epiphany that eventually became RePack’s reusable packaging model.

Since 2014, the company has raised a total of $2.4 million in funding over five rounds, and it partners with dozens of apparel and other brands.

Quick and easy return policies may make online shoppers happy, but they’re making Mother Earth very sad. E-commerce’s staggering environmental footprint is further exacerbated by all the stuff that gets sent back, a problem returns logistics companies are working to solve.

One of those companies, London’s ZigZag Global, runs a platform that helps retailers manage and resell returned stock in local markets. Founded in 2014 by Al Gerrie and Laurence Guy, the startup says it reduces parcel journeys by as much as 65 percent, resulting in a measurable reduction in waste and carbon emissions. In 2018, returned merchandise created 5 billion tons of landfill waste and generated 15 million tons of CO2 emissions, according to Optoro, another returns optimization company.

ZigZag has raised just over $1 million over five rounds of funding, the latest of which, a strategic investment from Maersk Growth, the investment arm of shipping giant A.P. Møller-Maersk, it announced just last month.

Cleaning up the waste of e-commerce returns