Conventional wisdom has it that interest in, and action on sustainability/greening is mainly the preserve of the Northeast, California and the Pacific Northwest. While those areas lead in many sustainability metrics in general and at the “Intersection of Green and Sports” in particular, the truth is the Greening of Sports is happening all over the U.S., in red states as well as blue.

Atlanta, capital of red state Georgia, is one of such place. And, the Georgia World Congress Center Authority (GWCCA), which among other things manages the Georgia Dome, current home of the NFL’s Falcons, is taking the lead in the greening of sports down south. GSB spoke with Tim Trefzer, the GWCCA’s sustainability manager, to find out more.

GreenSportsBlog: Tim, before we get into the GWCCA and the greening of sports in Atlanta, let’s learn a bit about you: How did you come to the intersection of Green and Sports?

Tim Trefzer: Tell you the truth, Lew, I never dreamed about working in sports. I was always interested in sustainability and also real estate. This led to my becoming LEED accredited and working with a consulting firm in Atlanta dealing with green building. One of our projects was the LEED for Existing Buildings certification of the Fort Lauderdale Convention Center in 2009-2010.

GreenSportsBlog: So that got you into the convention center world.

Trefzer: Exactly. And that led to the GWCCA opportunity. It really was ideal because of its diversity: The 200-acre campus comprises the Georgia World Congress Center, Centennial Olympic Park and, of course, the Georgia Dome. We also, as of last year, manage the Savannah International Trade and Convention Center.

GreenSportsBlog: What was your initial role with the GWCCA?

GreenSportsBlog: Wow — what a cool job you have. I’m interested to know about how the employees at GWCCA reacted to what you were doing when you first started.

Trefzer: Initially I got some pushback — I was the first person to hold a sustainability-oriented position in the organization’s 35-year history. Things started to turn around when I began presenting on sustainability to employees — why we were focusing on it and what we were doing. And you know what? The employees loved it. They felt empowered and, as time went on, they really felt proud that they worked for a sustainability leader.

GreenSportsBlog: Were you surprised at that reaction?

Trefzer: Not really — our employees as a unit are very talented and bright. So once they were educated about what sustainability/green could mean for the campus, they quickly got on board. 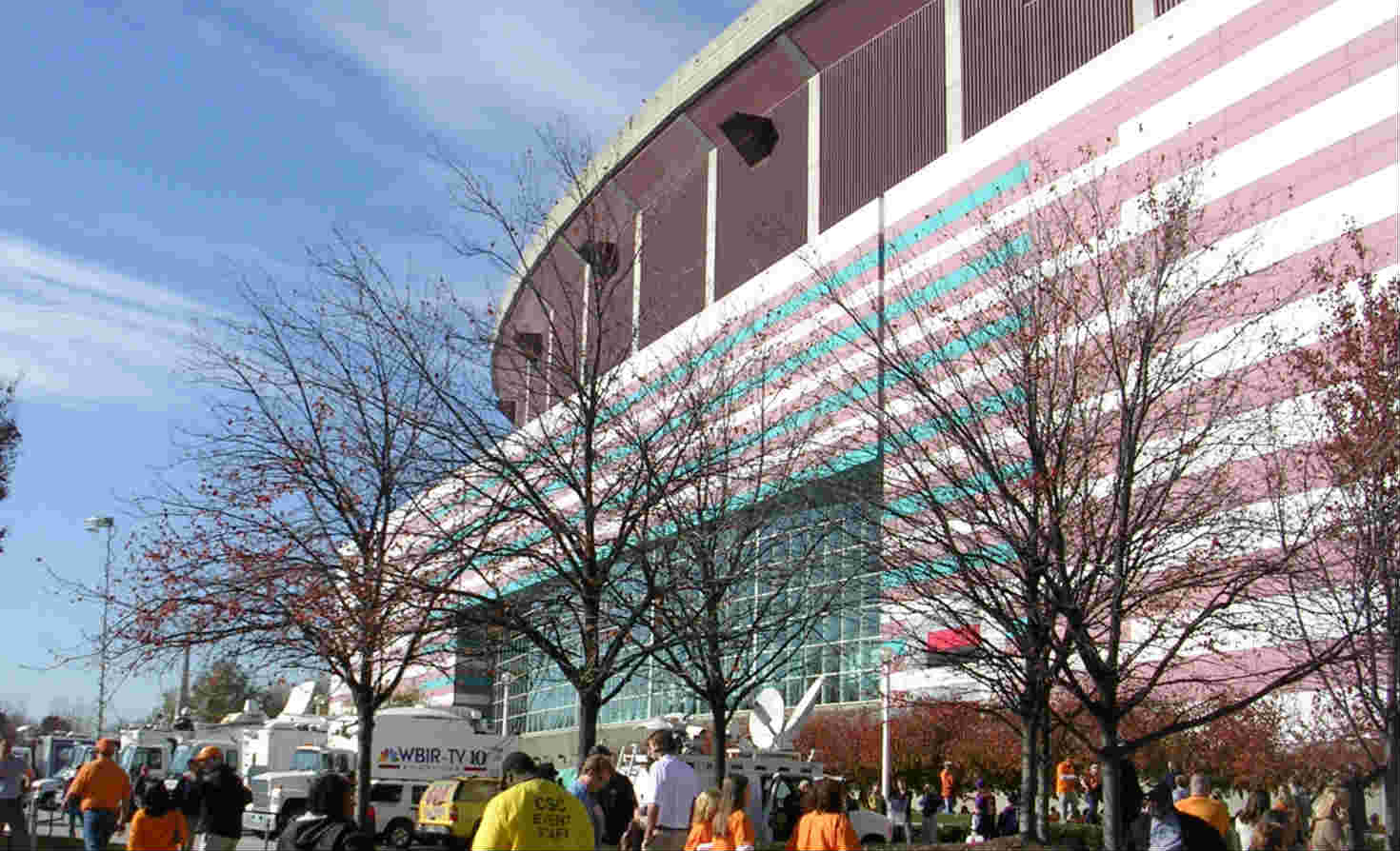 GreenSportsBlog: That’s really good to hear. Now tell us a bit about GWCCA and the Georgia Dome.

Trefzer: At 3.9 million square feet, GWCCA is the fourth largest convention center in the U.S. (McCormick Place in Chicago, site of next month’s Green Sports Alliance Summit, is the largest at 7 million square feet.) The Georgia Dome has been, for over 20 years, a high-profile centerpiece, having hosted the Olympics, Super Bowls and Final Fours. Despite the upcoming move to the new stadium, greening the Georgia Dome has been and continues to be important.

Trefzer: While we looked at LEED certification, we decided not to go that route, especially because of the move. Instead we’ve focused on improving our performance and practices in recycling, energy efficiency, water reduction and a greener food service.

GreenSportsBlog: On recycling, what do the Georgia Dome’s diversion from landfill rates stand?

Trefzer: Our data is for the entire GWCCA campus. Right now we’re at a 20 percent diversion rate.

GreenSportsBlog: Why do you think it’s so low?

Trefzer: In my mind, both employee and fan education is the main reason — but it is getting better. In fact, we recently hired a person to oversee the waste diversion efforts for the campus. We also work with our clients to coincide our goals with their events. The Falcons have a recycling sponsor in Novelis, an Atlanta-based aluminum rolling company that is a leader in the recycling of aluminum cans. The Rise Up and Recycle program raises awareness of recycling opportunities for our fans. We also worked with the NCAA and the 2013 Final Four committee to build recycling rates through ads in the game program.

GreenSportsBlog: How did that go?

Trefzer: During the five days of the Final Four we diverted over 33 tons of commingled materials. We, along with sponsor LG Electronics, also ran an e-waste recycling drive in the two weeks before the event, which led to 7 tons of e-waste being collected.

GreenSportsBlog: To get those diversion rates up, composting has to be part of the mix. Where do things stand?

Trefzer: Right now it’s in the back-of-house only. A pilot front-of-house program is planned for this season. 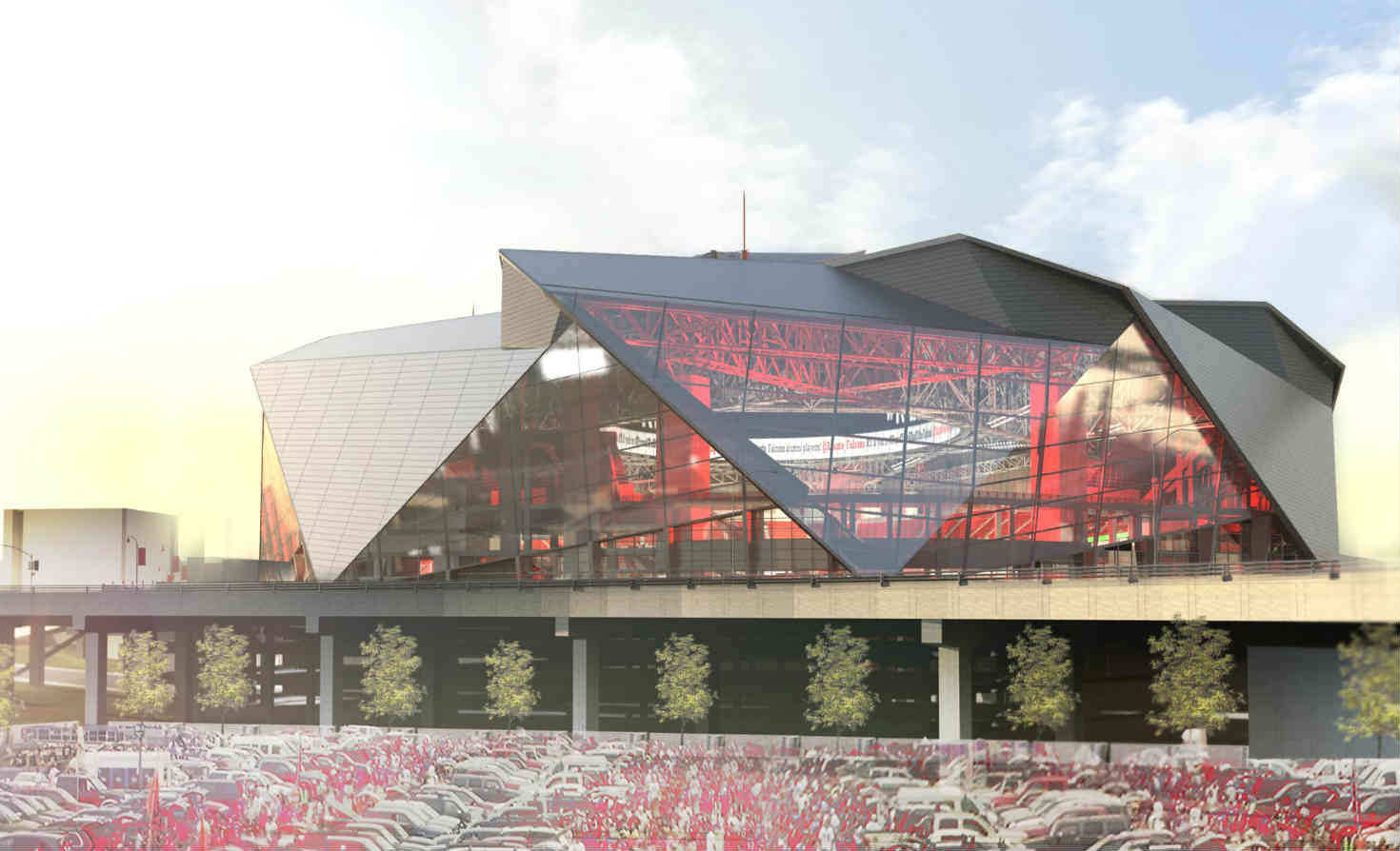 GreenSportsBlog: With the recycling program being heavily promoted, getting fans to put their food waste into composting bins shouldn’t be a heavy lift — hopefully. OK, let’s pivot to the new stadium. Sustainability has to be a key component, especially with Scott Jenkins, one of the founders of the Green Sports Alliance, managing its construction. Am I right?

Trefzer: Absolutely. The Falcons' new stadium will be next to where the Georgia Dome currently sits. It will open in March 2017 with the inaugural season of Atlanta’s new MLS team. Scott is ensuring sustainability is a core facet of the stadium’s DNA. Sustainability is also an imperative for Falcons ownership, led by Arthur Blank.

GreenSportsBlog: A co-founder of Home Depot, which has a strong strand of green in its DNA.

Trefzer: Right. The new stadium is going for a minimum of LEED Gold. Solar panels will be on site. Rain water will be collected for cooling and irrigation.

GreenSportsBlog: Diversion rates are now at 20 percent. What are the goals for the new stadium?

Trefzer: The intent is for Zero Waste (90 percent or greater diversion rate), which is helpful when you’re planning for it from the building’s inception. And our lighting systems will be state-of–the-art, both in terms of the use of LEDs and also with respect to natural light. The stadium is designed such that natural light will shine throughout the entire building.

GreenSportsBlog: I’ve seen the artist’s renderings of the stadium and the natural light feature is spectacular. What about transportation? I’m struck by how the builders of the new Braves stadium, to be located in the northeast suburbs, seem to have ignored mass transit. What about the Falcons?

Trefzer: GWCCA is located in downtown Atlanta and is served by 2 MARTA stops. 28 percent of Falcons fans already take it to the games. We expect those numbers to increase with the new stadium and the Falcons’ increased emphasis on sustainability. Bike share will also be part of the mix, as will a new street car line.

Trefzer: Well, Atlanta is quickly becoming a green leader. GWCCA is now the world’s largest LEED-certified convention center and is at the center of one of the densest LEED-certified event districts in the country, so greening it will impact a high-population community. Because of GWCCA’s and the Falcons’ high profile, we are looking to transform communities from the inside (local) out (regional).

GreenSportsBlog: Perhaps, in terms of greenness, and thanks in large part to GWCC, Atlanta is on its way to becoming the Portland or Seattle or New York City of the South.

Trefzer: That’s the goal and we’re up for the challenge.