Time for Tough Talk and Decisive Action in Copenhagen

The sky in Copenhagen was cloudy Monday, but the mood was definitely sunny.

I registered, along with 35,000 other delegates and observers, for the United Nations Climate Change Conference also known as COP15. The conference is being held at the Bella Center, which is a large exhibition center outside downtown Copenhagen.

The conference includes exhibits from NGOs as well as more than 250 official side events sponsored by a variety of organizations. It was announced today that 110 heads of state and government will attend the conference at its conclusion.

With the two weeks of talks just beginning, it was reported that most countries opened with their traditional hard line positions in preparation for the real negotiations to occur in Week 2. President Obama announced that the U.S. would put up its share of $10 billion for international financing of climate change in 2012. Financing for mitigation and adaptation in the developing world will be a big theme of the conference.

{related_content}I must say that the venue that the main plenary sessions are being held in is one of the largest and most impressive halls I have ever seen. Every country and delegate organization has their official seat and name card. Behind the delegates are room for thousands of media and observers.

It looks like I might be making an intervention (short statement) during Saturday's plenary session on behalf of the Business Council for Sustainable Energy. I will also be participating on a number of panels throughout the two-week conference and will be reporting more on those events later.

Clay Nesler is vice president of Global Energy and Sustainability for Johnson Controls Inc. You can follow him on Twitter @ClayNesler and twitter.com/efficiencynow 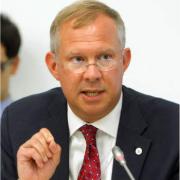 From planning to partnerships: What's driving smart city initiatives around the world

Why the green building industry needs to pay attention to tenants

Why the Future Holds More Clouds and Better Visibility for Buildings

See all by Clay Nesler