Highlighting the current global rate of urbanisation and future economic growth in the context, Mr Blair said, "We are going to expand enormously -- our economy, our consumption, over the years to come."

"Hundreds and hundreds of millions people are going to be lifted out of poverty and industrialised in China and India. And it's absolutely right that they are, by the way. But the consequences of that on emissions are going to be severe unless we change direction."

While he acknowledged that "the economic crisis has diverted a certain amount of political energy" away from climate change, he said: "It hasn't altered the basic facts. And the basic need to take precautionary action, otherwise we will face potentially a very, very serious situation."

He argued that "when virtually every chief scientific advisor on every major government in the world is saying the same thing" uncertainties over elements of the climate science should not undermine efforts on the whole issue. He warned that precautionary principles must apply in considering the reality and magnitude of climate risk: "when there is a serious possibility that this threat is real, and indeed the thought that ignoring it could cause irreparable, irreversible damage. It would really be the height of irresponsibility and folly not to act."

He said that the fundamental need for climate action remains, and urged businesses and governments to be optimistic and to "get with this, and be part of it, rather than stand out against it."

Saying that in tough financial times world leaders would not take risks with economic growth, Mr Blair stressed that the climate issue must not be pitched against economic development: "We are not going to solve this issue unless it becomes about different and better economic growth, not whether we have economic growth or not."

Encouragingly, he was quick to point out that in a time of global economic recession, private sector investment in the clean technology sector was increasing "exponentially."

However, he said that business still required a clear political mandate to emerge from world leaders through ongoing UN climate negotiations ahead of the Cancun summit in Mexico later this year: "If there is that business energy out there, that desire to change, we will accelerate its progress and hasten its advance if we have a framework at a global level, that means the major economies of the world say collectively -- to their businesses, to their consumers and their public -- this is the direction." He acknowledged that agreeing a basic framework for a global deal might still be some years away but said "the fact is we can get it together and we do have to get one."

Congratulating The Climate Group's CEO Steve Howard on founding "one of the most interesting and remarkable organizations" he works with, and said its partnerships and dialogue with business and government around sparking a clean industrial revolution were more important than ever.

Acknowledging the presence of in the room of U.K. Energy & Climate Change Minister, Greg Barker MP, Mr Blair said that there was positive competition in Britain over which can be greenest political party and said that The Climate Group was a "very, very good forum" for uniting centre right and centre left policy-makers around meeting the climate challenge.

Mr Blair also praised The Climate Group's China and India operations for their effectiveness in building influential business coalitions in developing economies and which he visited as part of his joint Breaking the Climate Deadlock initiative.

He said he could not think of a better organization to "lead the charge" in taking the climate change issue forward, securing "maximum political leverage" and giving people "a practical way through."

Amongst those attending the reception from The Climate Group's global network of business and government leaders were Walter Bell, Chairman of Swiss Re America, James Cameron, Executive Director and Vice Chairman of Climate Change Capital, Pete Grannis, Commissioner of the Department of Environmental Conservation of New York State, Dale Seymour, Senior Vice President of the Global CCS Institute and Tracy Wolstencroft, Managing Director of Goldman Sachs.

Photo CC-licensed by The Climate Group. 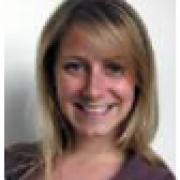 See all by Lauren Bird