A new "Atlas of Ecosystem Markets" quantifies the U.S. sustainability market's growth into a tool for regulators and researchers.

Environmental markets designed to funnel private-sector investment into conservation have grown dramatically under President Barack Obama, according to new data compiled by Ecosystem Marketplace and available in a new mapping tool posted this week.

The news came, however, as President-elect Donald Trump said he would nominate climate-science doubter Scott Pruitt to be the next administrator of the Environmental Protection Agency, casting doubt on the future of many initiatives.

Environmental markets aim to support conservation by putting a price on the ecosystem services nature provides, such as clean water and stored carbon. The new atlas was developed in collaboration with the Department of Agriculture’s Office of Environmental Markets (OEM) and the Environmental Protection Agency (EPA). It charts the progression of ecosystem markets since the 1980s, and the accompanying report identifies market trends.

How we got here

Environmental markets began germinating in the 1970s, with the passage of such legislation as the Clean Water Act and the Endangered Species Act, but the Obama administration accelerated development last year, when it issued a Presidential Memorandum aiming to spur private investment in biodiversity protection by streamlining policy and transitioning to landscape level conservation.

The FWS actually has released two. The first, in March, was a revision to an umbrella policy, which serves as overarching guidance on biodiversity protection measures.

Environmental markets began germinating in the 1970s, with the passage of such legislation as the Clean Water Act and the Endangered Species Act, but the Obama administration accelerated development last year...

The agency’s most recent policy move came last month. For the first time, the service released a draft Compensatory Mitigation Policy specific to the at-risk species listed under the Endangered Species Act (ESA). In short, compensatory mitigation is government-approved methods, such as conservation banking or in-lieu fee mitigation, to deal with unavoidable impacts to nature, which includes endangered species.

The draft policy seeks a transition to landscape scale conservation and states a preference for advanced mitigation approaches listing a suite of tools. Eric Holst of the Environmental Defense Fund is pleased the organization’s brainchild, habitat credit exchanges, made the cut.

Don Ross, president of the National Mitigation Banking Association (NMBA), said the new policy incorporates many — but not all — of the NMBA’s essentials including mitigation in advance of impacts, durability of mitigation projects and the careful use of additionality.

At the end of last year, the DOI launched a Natural Resource Investment Center to enhance private investment in wetland and species mitigation. In August, the EPA and USDA released a report pledging support to water quality trading markets in various ways.

"Policy consistency and clarity across the board really ratchets up the opportunity for large-scale private investment in conservation," George Kelly, chief markets officer of Resource Environmental Solutions (RES), a Texas-based restoration company and one of the 11 entities pledging millions towards conservation activities, said in March.

When market practitioners such as Kelly couple the Obama administration’s interest in ratcheting up private sector investment in conservation with its preference for such advanced types of mitigation as conservation banking, they see the right atmosphere for market growth.

Biodiversity-related market activity is one of a few areas the government is laying down the groundwork for more environmental market activity. Last month, for instance, the Council on Environmental Quality released final guidance that instructs all federal departments to fully consider global warming and its impacts when making decisions and implementing activities. While not a slam dunk for market growth, some see it as another step toward the government eventually deciding to use offsets to manage its climate impacts.

There is also the Clean Power Plan, which the Environmental Protection Agency (EPA) officially unveiled last year. The plan remains tied up in court with an uncertain future, but if states do implement it, experts agree it opens the door for carbon trading on a grand scale. 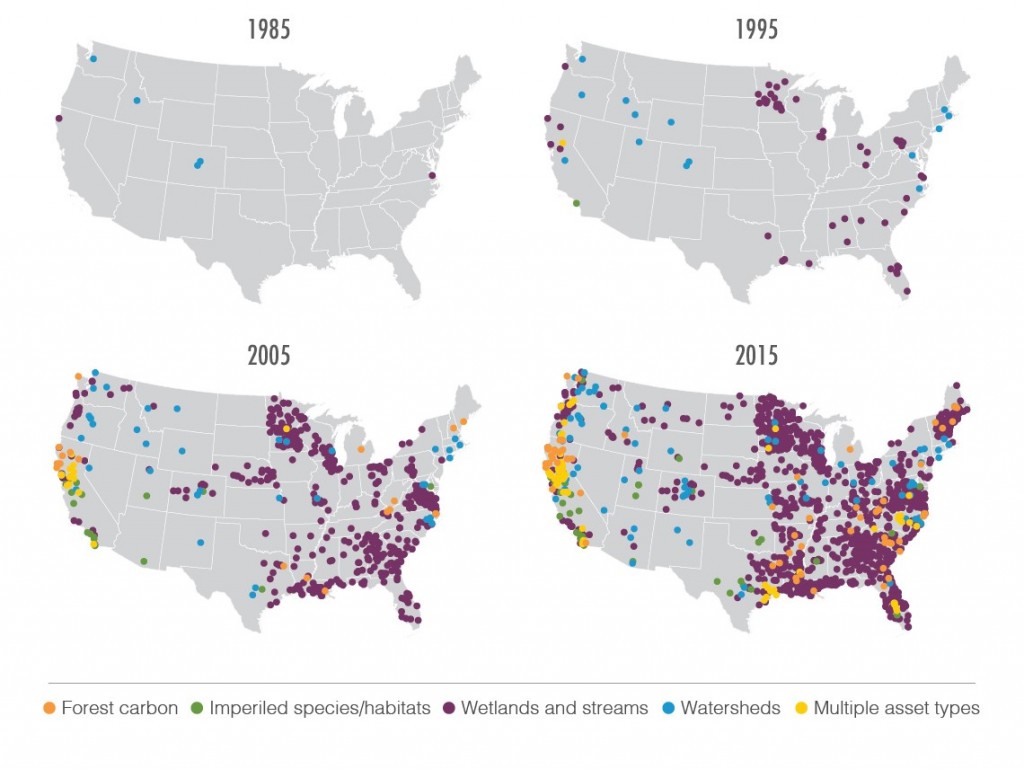 An Oct. 12 webinar presented the EnviroAtlas tool, awash with new data, as well as a new Atlas of Ecosystem Markets that will showcase market trends based on the mapping data. The atlas, designed for a general audience, for the first time maps size, scale and broad trends across ecosystem markets in the United States. Its creators also say the maps can serve as a decision-making tool for policymakers and other actors.

The maps offer a new way of looking at ecosystem markets and their broader political/demographic/landscape context, Bennett explained. The atlas explores the connection between supportive policy, such as state guidance on water quality trading, for instance, and where markets are active.

One key message runs throughout the study: ecosystem markets in the U.S. have experienced substantial market growth in the last 10 years.

The data reveals a positive outlook for markets — at least for now. Policy winds can rapidly shift — Presidential Memorandums are a lot easier to undo than legislation — and a new political administration in the White House could change course or at least usher in a new layer of uncertainty for market participants.