The top tech to cut energy costs and emissions? You may be surprised

There are many ways to reduce a company’s carbon footprint and energy spending, but you may be surprised at the most popular.

Based on revenues gains last year in the various advanced energy segments — including solar, wind, gas turbines, biofuels, energy storage and building efficiency technologies — the last grabbed the biggest share of revenues, at $63.6 billion globally and $52.8 billion in the U.S., according to the Advanced Energy Economy group.

Investments in building efficiency technologies took 30 percent of what the organization estimates is a $1.4 trillion global advanced energy market in its annual Market Report — a snapshot on revenues for the segments it tracks. The research is done by Navigant Research.

But while it's been clear that Internet of Things (IoT) technologies are finding their way into many industrial and commercial products — including, for sure, building management and energy efficiency — its role in energy seemed to surprise the authors.

Building efficiency is the largest single segment in the advanced energy market.

"Building efficiency is the largest single segment," Bob Keough, vice president of the AEE group, said, ticking off research findings in a conference call. He said that points to the "effective disruption" of wireless IoT technologies.

Nest, the division of Google/Alphabet that sells smart thermostats and home surveillance gadgets, pioneered this market and is one of its biggest beneficiaries. 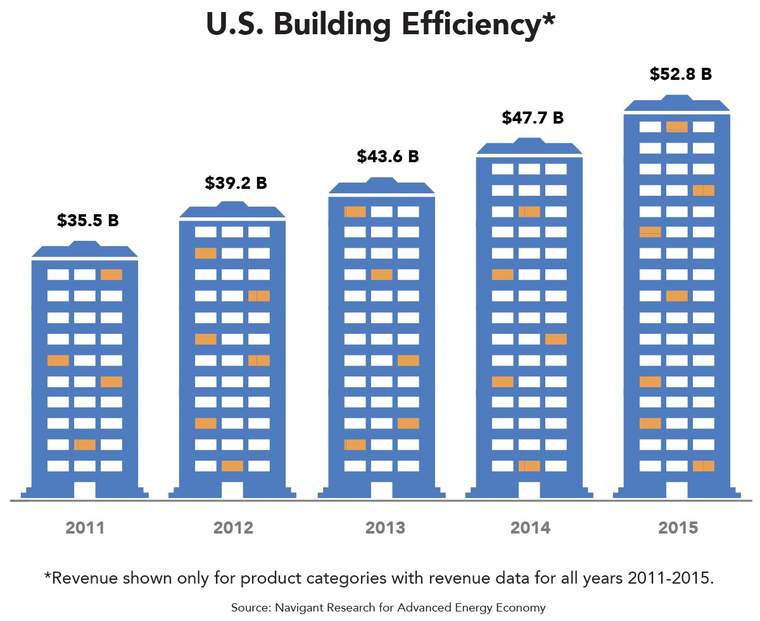 And it’s not as if other energy sectors were slackers. Solar revenues jumped 21 percent year over year to $22.6 billion — and tripled over the past five years — even as prices for solar equipment have plummeted.

One is geographic or what he called "expansion from a tiny market" concentrated in a few states into one in "many, many states, driven by the falling costs of PV." He noted that solar sales used to be driven by regulatory incentives but now price and performance of solar photovoltaic installations drive sales.

Secondly, Starrs said, "solar really is two markets — one is the large scale utility power maker and the second is small-scale rooftop applications." But the rapid uptake based on solar's performance and price is happening in both.

"The utility scale power plants are finally gaining acceptance in utility sector overall," he said, with solar becoming a significant piece of many utilities' electricity generation. 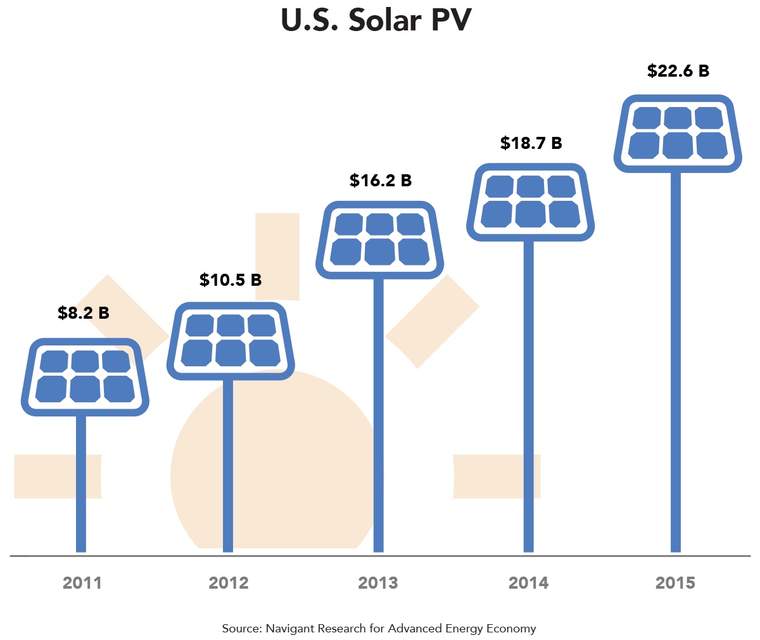 Another blockbuster area was storage — or energy storage in batteries. Although a nascent and tiny market, installations doubled in 2015 and revenues grew twelvefold to $734 million, AEE said.

Technologies for electricity delivery and management for utilities grew 24 percent to $18 billion, according to the AEE report, which Keough said indicates IoT technologies are entering that space, too.

Energy generation, which includes renewables as well as other non-fossil fuel power such as nuclear and hydro-electric generation, grew 18 percent to $52.3 billion.

Sales of ethanol — a component of biofuels — fell to $27 billion from $40 billion.

Novozymes: Integrating the world's climate goals into a business plan

Which country leads in wind generation?