This article first appeared at SustainableBusiness.com.

In an effort to get fuel-cell cars off the ground, Toyota is giving automakers free access to some 5,680 patents, following in the footsteps of Elon Musk, who did the same last year for Tesla's electric car.

"By allowing royalty-free use of FCV-related patent licenses, Toyota is going one step further as it aims to promote the widespread use of FCVs and actively contribute to the realization of a hydrogen-based society," the company stated.

In December, Toyota started selling the world's first mass-produced fuel cell vehicle — the Mirai sedan — in Japan, and sales begin late this year on both coasts of the U.S. and in some European countries, such as the U.K., Denmark and Germany. The goal is to sell more than 3,000 cars in the next two years, but it well may exceed that given the thousands of pre-orders from government agencies and fleets.

With two hydrogen tanks under the seats, Mirai has a range of 400-435 miles, and can accelerate from 0 to 60 miles per hour in nine seconds. A powertrain with an electric motor and fuel cell stack replaces the gasoline engine. It will retail around $45,000 after federal and state incentives in the U.S., and fueling is free in California. 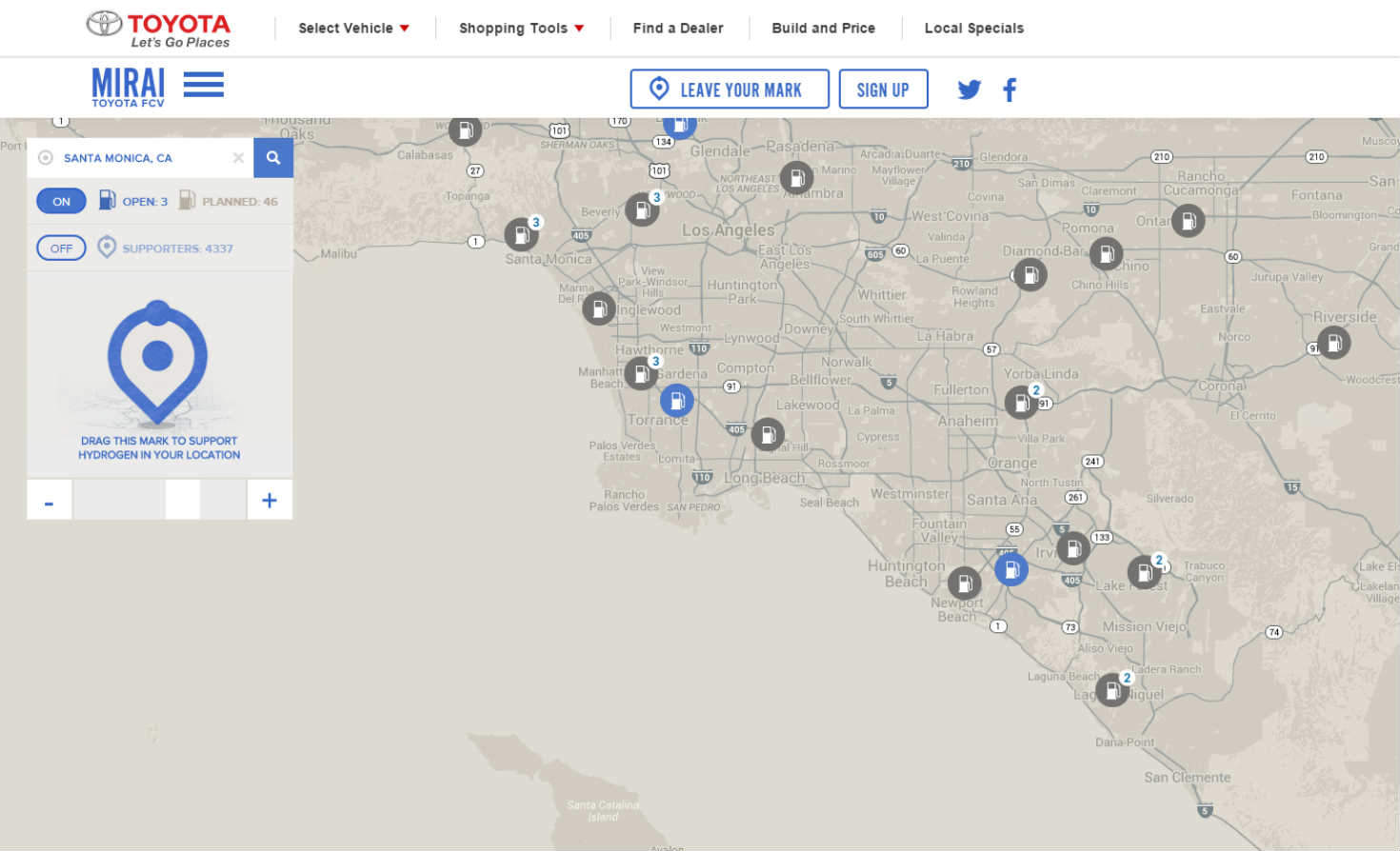 Low gas prices aren't expected to stop adoption of electric vehicles, but sales will be dampened as people focused only on economics turn back to conventional cars. If gas averages $2.09 a gallon in the U.S., EVs will have a 6 percent share in the market by 2020, down from 9 percent at $3.34 per gallon, according to Bloomberg New Energy Finance.

Oil prices are down partially because of the push for cleaner energy, he said, noting that petroleum demand is down over 10 percent since 2007, even as the economy is growing. That's at least partially due to better fuel economy in vehicles, which is improving every year. This and fewer miles driven has more impact on cutting U.S. oil imports than unconventional production, said Liebreich.

Under President Obama's Climate Action Plan, fuel efficiency standards for model years 2012-2025 will cut oil use by 2 million barrels a day. That will save Americans more than $1.7 trillion in fuel costs while preventing 6 billion metric tons of greenhouse gas emissions over vehicle lifetimes.

Because of strengthened regulations, greenhouse gas emissions from the average car are down 20 percent since 1998, and smog-forming emissions are down 87 percent since 2000, according to the Union of Concerned Scientists. "Automakers have a lot of clean technology ready to roll, and they are only just beginning to deploy it," noted Don Anair, research director of its Clean Vehicles program.

In November, the EPA announced the largest civil penalty under the Clean Air Act: $100 million to be paid by Hyundai and Kia. They sold 1.2 million vehicles that emit much more than they certified to EPA — about 4.75 million metric tons of greenhouse gases more. They also will spend $50 million on measures that prevent future violations.

Hyundai and Kia also forfeit $200 million worth of greenhouse gas emission credits, which represent those 4.75 million metric tons. Automakers earn the credits for building vehicles with lower emissions than required by law. They can use them to offset emissions from less fuel-efficient vehicle models or sell them to other automakers for the same purpose. The credits they forfeited equal the emissions from powering about 433,000 homes for a year.

Kia and Hyundai settle for $100M for past bogus mileage claims

Fuel Cell-Powered Cars Hitting the Road Ahead of Schedule

Will the oil price slump hit sales of cleaner cars?

Toyota speeds into the energy future with fuel-cell cars