Tracking the relationship between the oil supermajors and climate change

This article is adapted from our newsletter Energy Weekly. Subscribe here.

The oil supermajors — Chevron, ExxonMobil, Royal Dutch Shell, BP and Total — want you to know they get climate change, and they are working on it. After all:

Indeed, a new report from InfluenceMap shows the supermajors have invested millions to brand themselves as climate champions. Which begs the question: Where does the talk stop and the action start?

Oil companies have a bad walk-to-talk ratio on climate

Meanwhile, 25 percent of the lobbying and branding budgets for the supermajors is focused on climate, according to InfluenceMap. Recognizing the potential reputational risk associated with inaction, oil CEOs are looking to increase their PR budgets in 2019, suggesting the image battle is as real as the climate battle to fossil fuel companies — maybe even more so.

The irony is that if the companies in this group were interested in becoming renewables supermajors, that feat is within their reach. In order to capture the same market share in renewables as they account for in oil (about 15 percent), those five supermajors would need to spend about $20 billion annually, according to Wood Mackenzie. That amounts to less than 20 percent of their current capital expenditure budgets.

It is true that the transition is a process. We can’t quit dirty energy tomorrow, our economy is still largely powered by it, and the transition can’t complete overnight.

Yet, to stop runaway climate change, scientists agree that we need to be running — not slow walking — towards the transition. Oil and gas production needs to fall by 55 percent by 2050. The carbon math shows we can’t burn all of our known fossil fuel reserves, much less expand to new reserves. Even Shell and BP agree on that.

Currently, we aren’t headed in the right direction. Energy consumption grew in 2018 (thanks to a strong economy and extreme weather demanding more heating and cooling). That led to a 1.7 percent rise in emissions, a new global high of 33.1 gigatons, according to the International Energy Association. Driving that energy growth: natural gas, especially in the United States.

What are oil supermajors doing to transition to clean energy?

Taken together, here is my completely not-comprehensive or scientific calculation of about how much renewable capacity oil supermajors currently own: 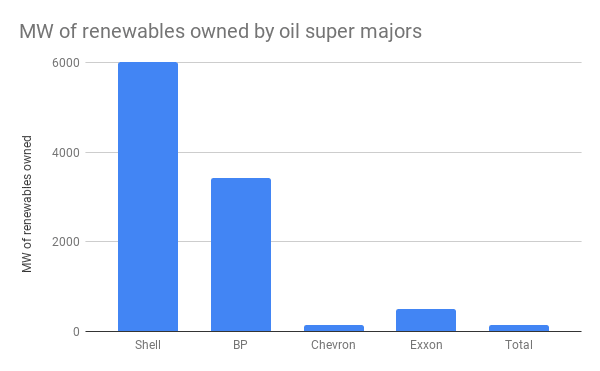 The natural gas gorilla in the room

We are in the midst of a U.S. oil boom, with Texas’ Permian Basin producing more crude than refineries can absorb. Oil companies — including Shell, Chevron, BP and Exxon — are vying for a piece of the action, with plans to increase production and export to foreign markets. American exports jumped 70 percent to 2 million barrels a day last year, and projections show that could grow to 5 million barrels a day by 2020. Total says it will account for more than 10 percent of liquefied natural gas (LNG) exports by 2020.

This expansion is at odds with the carbon budget and highlights why natural gas is quickly becoming one of the largest sources of emissions in the United States.

What role should oil companies play in the clean energy transition?

In some ways, the oil companies would be perfect renewable allies. Their cash flow gives them the ability to invest in R&D and deployment at the scale needed to address the problem, they are tactical and they own distribution networks. On the other hand, they are a trillion-dollar incumbent industry that has a track record of undermining meaningful climate policy.

The urgency of the problem means we need all hands on deck. But whenever a company wants to invest in infrastructure that would require further extraction and burning of fossil fuels to recoup its capital investment, I’m suspicious of how seriously they’re taking the climate challenge.