The Ocean Conservancy is a 44-year old nonprofit that creates science-based solutions for a healthy ocean and the wildlife and communities that depend on it.

Plastic ocean waste — a serious, festering yet underreported environmental problem that affects the public and economic health of millions around the world — is one issue the organization is tackling.

GreenSportsBlog spoke with Nick Mallos, the Ocean Conservancy’s director of trash free seas, about how his team is working with the sailing world to publicize the Plastic Ocean Waste issue.

Lew Blaustein: Director of trash free seas. That is one cool job title. How did you get to the Ocean Conservancy and the "Trash Man" moniker?

Nick Mallos: I’ve been working on trash in the ocean for the better part of a decade, with the last six years at Ocean Conservancy, so "Trash Man" seems to fit perfectly. Before that, while at Dickinson College, where I earned a bachelor's of science in biology and marine science, I spent a semester in the Caribbean to study lemon sharks.

While on the Island of South Caicos, I saw that massive amounts of trash and plastics were washing ashore on its north side. This got me interested in marine debris and what was needed to do to remove it.

Plastic ocean waste is, sadly, a powerful tool to get diverse audiences to care about an environmental issue.

Later, in 2007 to 2008, I was a teaching assistant in marine science on the Outer Banks of North Carolina, right around the time when a significant number of people started to be aware of the Pacific Gyre [a massive "garbage patch" in the Northern Pacific Ocean].

The one issue that resonated with students of all ages, all backgrounds, was that trash shouldn’t be in the ocean. Plastic ocean waste is, sadly, a powerful tool to get diverse audiences to care about an environmental issue.

Mallos: Oh, "sad" is just part of it. "Tragic" is an even better word. While I was doing my masters at Duke’s Nicholas School of the Environment, I traveled to the Midway Atoll in the Pacific to see the effect of plastics up close, on the pacific sea turtle, Laysan albatross and Hawaiian monk seal.

Blaustein:  I bet those effects are not good. 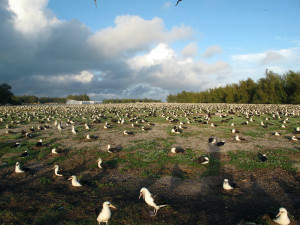 Nick Mallos
<p class="p1"><span class="s1">Nesting Laysan albatross on Midway Atoll. Albatross bring 4.5 tons of plastic onto the island each year in their stomachs.</span></p>
Mallos: You would cash that bet. The plastics come from just about everywhere in the Pacific: Southeast Asia, China, Korea, even Russia. The albatross eat the plastics mistaking them for fish eggs and then those plastics are fed to their chicks, which cannot regurgitate the material. Almost all of the juveniles on Midway Atoll have plastics in their stomachs.

Blaustein: So working with the Ocean Conservancy, which, I imagine, helps to lessen the amount of plastics in chicks’ stomachs, sounds like a natural for you.

Mallos: No doubt about it. I have a great team of five working with me. Our longest-standing project is the International Coastal Cleanup, which goes back 31 years. It’s a global volunteer effort, with 150 countries participating. Since its inception, volunteers around the world have removed 220 million pounds of trash from waterways, beaches and the ocean.

Blaustein: How many volunteers do you have?

Mallos: We have about 500,000 in a typical year. 2015 was anything but typical as we had 800,000 volunteers. We’ll find out on International Coastal Cleanup Day on Sept. 17 whether we can beat that number.

Blaustein: This must be a Herculean organizational effort.

Mallos: No doubt about it. Helping us is the CleanSwell app, which allows the volunteers to log the trash they collect and gives them the ability to connect with each other.

Blaustein: What happens with all that trash? 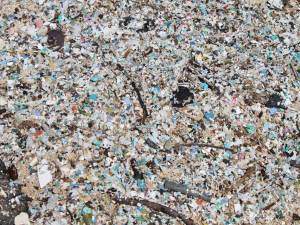 Nick Mallos
<p class="p1"><span class="s1">One-meter-by-one-meter surface sample at Kamilo Point on the Big Island, Hawaii. More than 84,000 pieces of micro-plastic were counted.</span></p>
Mallos: We recycle it where possible; unfortunately some has to go to the landfill. We now have a working group on up-cycling the trash into something else. Norton Point is one such partner who is turning the plastic trash into sunglasses.

Blaustein: This is all phenomenal stuff. How does sports fit in with what the Ocean Conservancy is doing?

Mallos: As a soccer player at Dickinson, I get that sports is a universal language. There’s no question that environmental messaging, if communicated powerfully through teams and leagues, will find a ready audience among fans, leading to changed behavior.

So we’ve gotten involved with sailing through 11th Hour Racing, the organization devoted to promoting improved ocean health through the sport. 11th Hour sponsors 55 South, one of the sailing teams that competed in the 2015 Volvo Ocean Race.

Blaustein: Sailing around the world? These folks must get up-close looks at ocean plastic waste.

Mallos: For sure. Teams like 55 South see and feel the impact of ocean debris on their races. This is our first engagement with the sailing community; we started last year with 11th Hour and 55 South. We helped the latter tell the story about the problem of ocean plastic waste and solutions to it at the Ocean Summit when the Volvo Ocean race stopped in Newport, Rhode Island, last year.

Blaustein: Did the plastic ocean waste story get on the TV coverage of the Volvo Ocean Race?

Mallos: Not to our knowledge, but we had great print media coverage. Getting this type of story on TV and other mass media would obviously be huge and we’re working towards that end for the next Volvo Ocean Race in 2017-2018.

Blaustein: Is Ocean Conservancy working with sports beyond sailing?

Mallos: Not yet but we can certainly envision working with the NFLs, MLBs and MLSs of the world going forward. After all, most cities that host pro sports teams are on or close to a major body of water.

Sailing toward a brighter horizon