In the time it takes to read this sentence, the world will have lost an area of forest greater than a soccer field. When the New Years ball drops to usher in 2015, an area the size of Ireland will have been lost since the last time it dropped. Even when you factor in new trees planted each year, the net loss of forests is still a staggering 12.8 million acres—the equivalent area of Costa Rica.

The good news is that conservation efforts have slightly reduced the net loss of forests since the 1990s. The bad news is that this isn’t good enough.

Fortunately, nearly 90 percent of companies see opportunities in shifting to sustainably sourcing key commodities in a way that safeguards forests, according to a report by CDP.

The CDP's updated annual report, "Deforestation-free supply chains: From commitments to action," looks at the disclosures from 152 global companies, including Asia Pulp & Paper, Cargill and Unilever, representing a market capitalization of over $3 trillion, who responded to investor calls for transparency and accountability on deforestation and forest-risk commodities.

Forests are greater than the sum of their trees, and reversing deforestation is more than just planting saplings. When old growth forests die, they can take anywhere from a century to several millennia to grow back, and the biodiversity they once boasted may be lost forever.

The world is a big place—but it isn’t that big. It is only a matter of time before the math catches up with us and our planet’s trees go the way of Dr. Seuss’ truffula. That is, unless we take immediate and meaningful action. 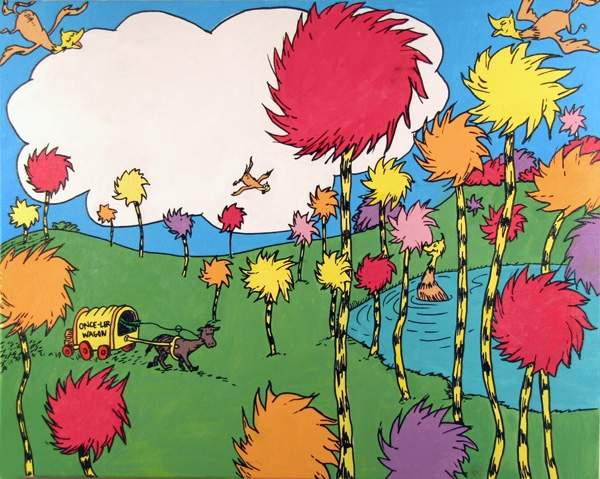 Dr. Seuss wiki
The Truffula tree from the Dr. Seuss book, "The Lorax"

There was a lot of big talk at the United Nations Climate Summit in New York this September. Thirty-four companies, including Asia Pulp and Paper, Cargill and Unilever signed the New York Declaration on Forests, which sets a global timeline to halve deforestation of natural forests by 2020, and end it altogether by 2030.

The declaration also calls for the restoration of forests and croplands equal to an area larger than India. This could save between 4.5 billion and 8.8 billion tons of carbon emissions annually by 2030 — the equivalent of taking all the world's cars off the road for one year. The U.N. says this will be vital to limiting global warming to 2 degrees Celsius needed to avert global catastrophe.

A major driver of global deforestation comes from the demand for four key agricultural commodities: cattle, palm oil, timber and soy. These commodities fall within the supply chains of companies across sectors from food to fuel.

Companies understand that making a commitment to a deforestation-free supply chain is the first step in securing their business against climate-related risks, the CDP report says. High-profile deforestation pledges from businesses such as the palm-oil sector giant Wilmar International, which discloses to CDP’s forest program, indicate growing corporate awareness. But the report shows there is still a lot to be done before companies can walk the talk.

A major problem across commodities and supply chains is inconsistency in assessing and acting on risks and opportunities. Companies further along the supply chain are less likely to recognize operational risks to their business, with only 35 percent of manufacturers identifying operational risks associated with soy when 83 percent of producers see that same risk.

Fail to act, fall behind

Businesses failing to act on deforestation risk lagging behind their competitors, the report says. The 30 percent increase in the number of investor signatories demanding corporate disclosure through CDP’s forests program shows that investors are increasingly paying attention to these issues.

Firms that do not disclose to investors and other stakeholders through CDP could have vulnerabilities in their supply chains and are at risk of lagging behind their competitors, the report indicates. Disclosure to CDP also enables companies to better understand their exposure to deforestation risks and the opportunities that exist to mitigate against them.

Last week's Republican coup on Capitol Hill will almost certainly result in a climate-denier Congress come January. More than ever, forward-thinking companies are going to need to step up to take climate action. Many already have.

In September, CDP released a report showing that 29 major public companies in the U.S., including Dow Chemical, Goldman Sachs and ExxonMobil are already incorporating an internal carbon price into their business decisions.

There is also a growing awareness that generating profit and driving a positive impact on natural resources and ecosystems are not mutually exclusive.

The conservation impact investing market totaled $23 billion from 2009 to 2013 and is expected to increase to $37.1 billion over the next five years, according to a recent report by The Nature Conservancy’s NatureVest division and EKO Asset Management.

In case you were wondering: Some 20,000 trees were destroyed in the time it took to read this story.

Did The Lorax sell out?

A clear-cut case for business action on deforestation

Avoid these 8 deforestation traps in your supply chain