Lessons of the first 40 years of the "soft path" to U.S. energy policy as told by the climate scientist who coined the term.

When the 1973 oil shock threatened security and prosperity, America’s initial policy responses were confused and ineffectual.

At that teachable moment, my Foreign Affairs article "Energy Strategy: The Road Not Taken?" reframed the energy problem and added an alternative vision of U.S. energy strategy.

The "hard path" was more of the same; the "soft path" combined energy efficiency with a shift to renewable supply. The article soon became that venerable journal’s most reprinted, spreading as virally as pre-internet technologies permitted. Forty years later, a review of its initial reception and continued influence shows what lessons have and haven’t been learned. 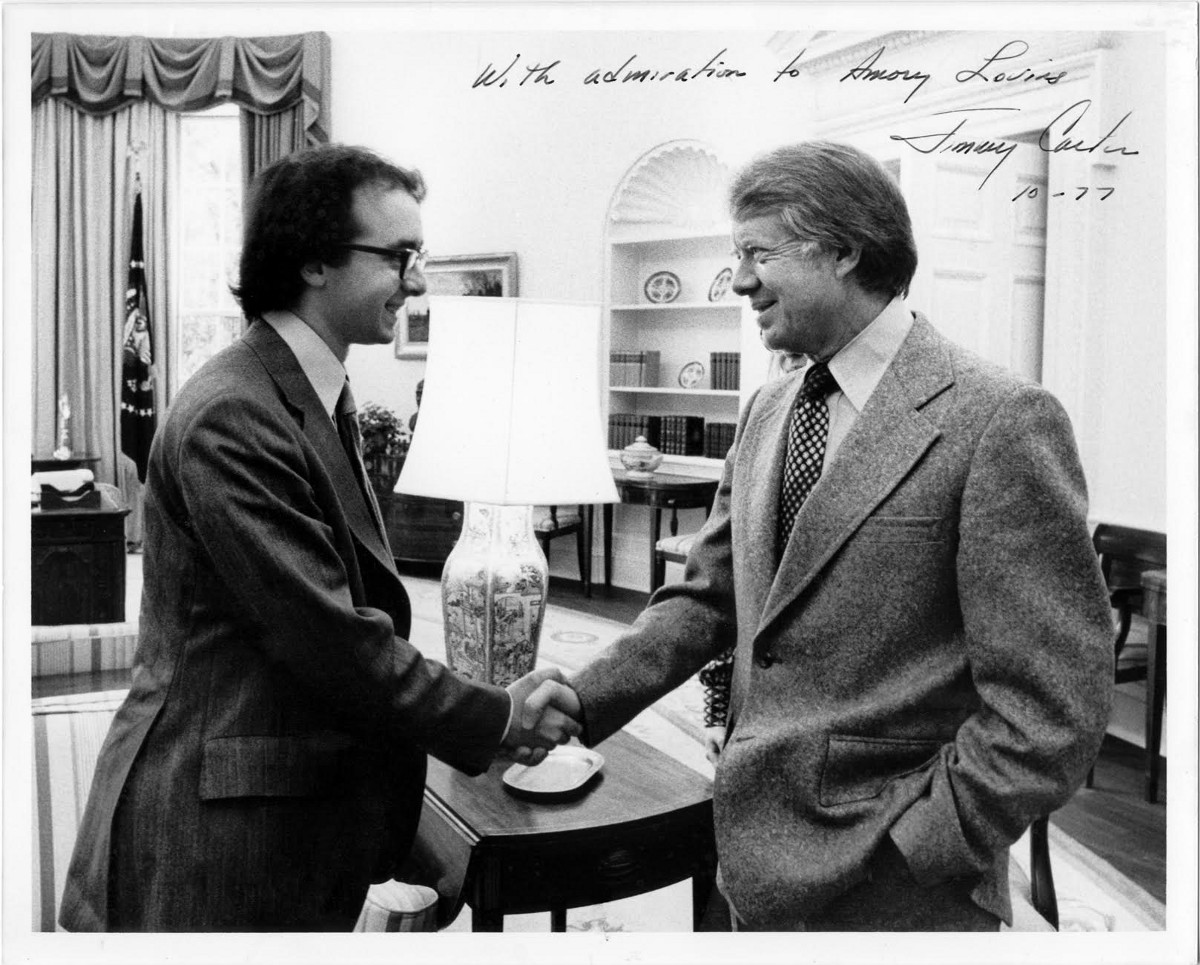 To this 28-year-old author, it felt like dropping a seed crystal into a supersaturated solution, suddenly crystallizing the liquid into a whole new form.

A year later, President Jimmy Carter invited me into the Oval Office to discuss the article. He now says he found it very helpful in forming his energy policy — apart from Energy Secretary Schlesinger’s synfuels effort, the most coherently pro-efficiency-and-renewables policy before or since.

Incumbent energy industries greeted the article with skepticism, scorn, even outrage. A four-inch-thick Senate hearing record compiled three dozen pairs of critiques and responses. Nowadays it makes amusing reading, reminding us that 40 years ago energy efficiency was novel and controversial, while renewable energy was strange, threatening or absurd. Some people still cling to those views.

When the hubbub died down, ARCO’s chief economist, David Sternlight, nicely captured the conclusion of sober observers: He for one didn’t care if I were only half right — that would be better performance than he’d seen from the rest of them.

Over the next decade, the article’s thesis gained enough credence that many of its harshest critics hired RMI, founded in 1982, to help them adopt it. By the current decade, two leading journals of the electricity industry generously recognized our approach’s prescience, and the article’s thesis broadly has prevailed in the energy marketplace.

The article was so influential because rather than just proposing yet another portfolio of energy investments, it redefined their purpose and logic. Previously, the problem was where to get more energy — more, of any kind, from any source, at any price. Planners extrapolated historic growth in energy demand and built supply to meet it.

The article started at the other end by asking what we want energy for — what "end-uses" we sought, such as hot showers, cold beer, mobility, comfort, smelted alumina, baked bread — and how to deliver each of those services by providing the amount, kind, scale and source of energy best suited to the task.

This end-use concept soon merged with Roger Sant’s "least-cost" language, resonant with the emerging Reaganomics emphasis on free markets. The resulting "end-use/least-cost" approach revealed the most cost-effective solutions, chosen via competition or planning, to such questions as whether to keep warm in winter by gas or electric heating, or by insulation and weatherstripping.

Different questions yield different answers, so the article contrasted two ways the U.S. energy system could evolve (Figures 1A and 1B). 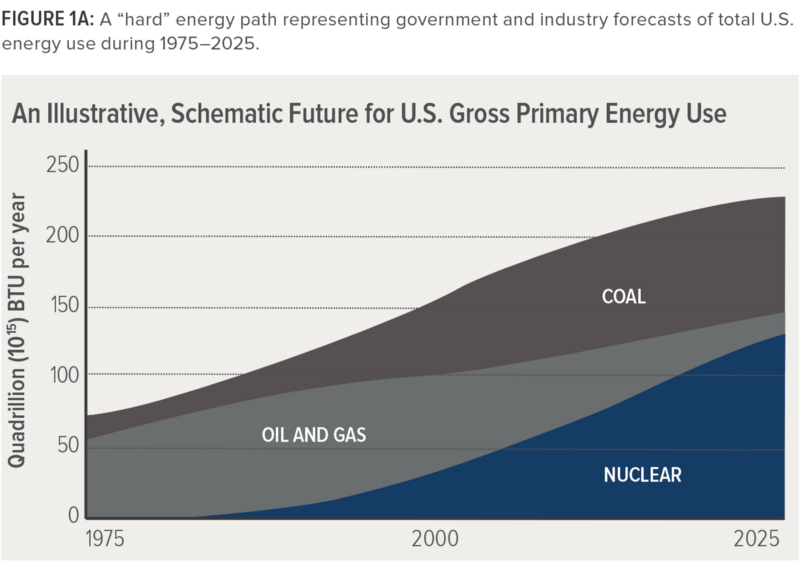 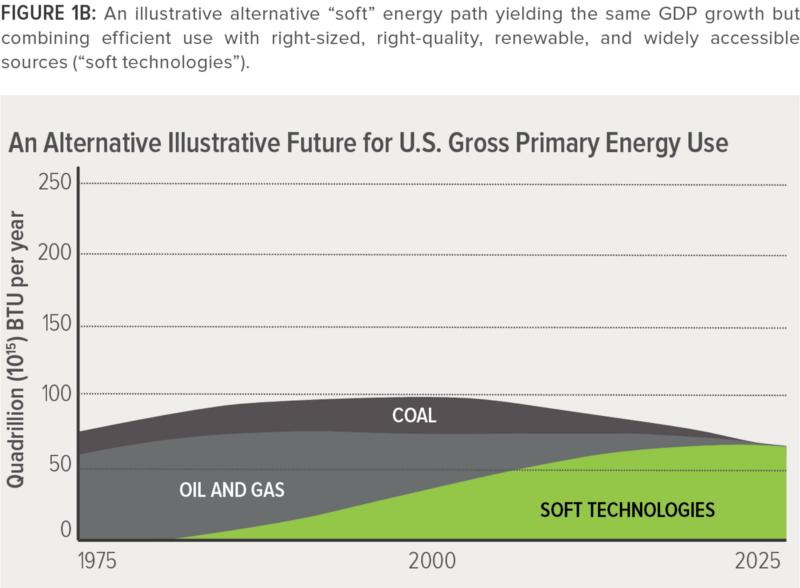 A later scholarly review found the article had been the only one of dozens of mid-1970s studies with accurate foresight about total U.S. primary energy use in 2000 (foresight, but explicitly not a forecast, as it is often still mischaracterized). The soft path shown in Figure 1B is 0.8 or 4.0 percent below actual 2000 energy use, normalizing to actual GDP growth or not, respectively. But the best contemporaneous econometric forecasts were about 60–70 percent too high. Then in 2000–15, far from turning upwards, energy intensity fell by a further 24 percent.

Figure 2 compares the hypothetical energy intensity trajectory the article suggested as feasible in 1976, falling 72 percent in 50 years, with its actual 56 percent fall in 40 years. The "near-halving" envisaged by "about the turn of the century" occurred in 2008. 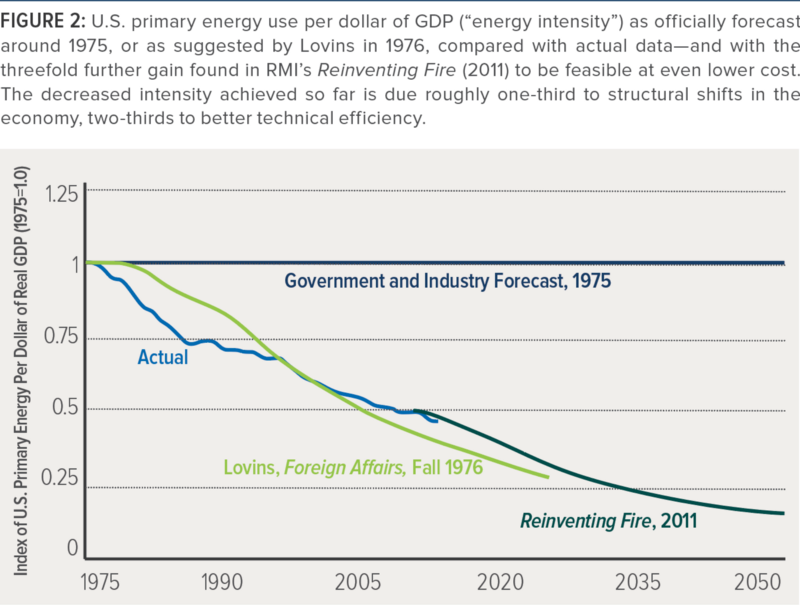 Electricity is the costliest form of energy, yet Americans have saved electricity only half as fast as direct fuel. That’s partly because until about 2001, 48 states’ utilities were still rewarded for selling more energy; even now this is done in 36 states for electricity (with reforms pending in eight) and 28 for gas (with reforms pending in four). But as such perverse policies begin to fade, electricity use has drifted down from its 2007 peak. In the long run it may shrink by about 1 percent a year despite solid economic growth and all-electric automobiles.

The demand-side foresight of the projected soft path wasn’t matched on the supply side (Figure 3). Although some states such as California successfully pursued their own soft paths, powerful lobbies and hence national policy strongly favored the hard path in energy supply.

The differences between Figures 3A and 3B have three main causes affecting each element of supply:

Carter’s 1978 PURPA law, which let independent and distributed generation compete fairly, enabled a false dawn of renewables in the early to mid-1980s. Although weakened by legal and regulatory attacks, PURPA destroyed the rationale for utility monopoly and laid the groundwork for today’s competitive power markets, which now replace PURPA in half the nation. Thus after a long, bumpy detour, renewables since about 2010 have at last taken off as hoped in 1976 — but roughly 35 years late. 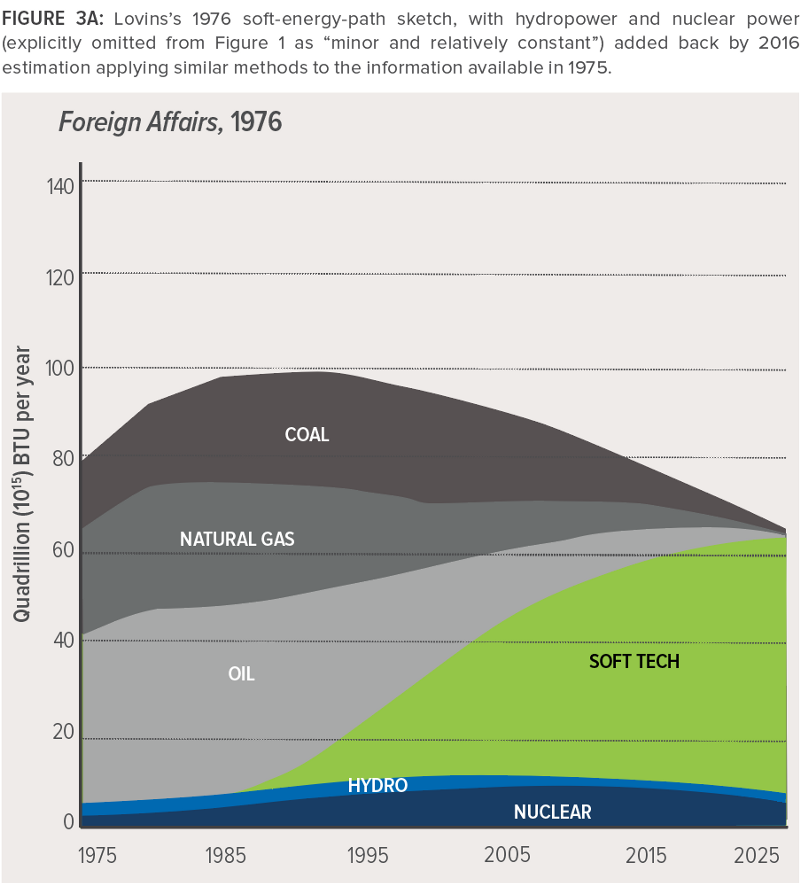 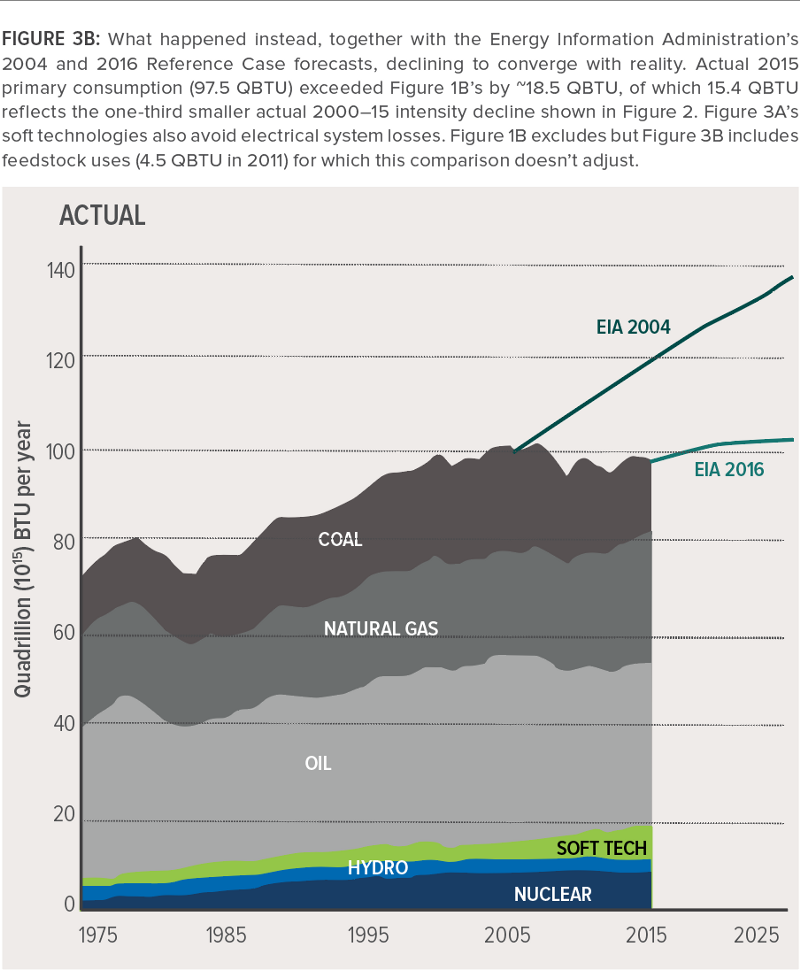 Things I got right

"The commitment to a long-term coal economy many times the scale of today’s makes the doubling of atmospheric carbon dioxide concentration early in the next century virtually unavoidable, with the prospect then or soon thereafter of substantial and perhaps irreversible changes in global climate. Only the exact date of such changes is in question."

Are we there yet? Cue the Clean Power Plan and the Paris Agreement.

Anticipating RMI’s 2002 book "Small Is Profitable" and today’s market trends, the article said avoided grid costs and diseconomies of scale could reduce electricity costs, and "an affluent industrial economy could advantageously operate with no central power stations at all!"

It also noted, "Energy storage is often said to be a major problem of energy-income technologies." But partly since thermal storage is easier and cheaper than electrical storage to do the same tasks, "on the whole … energy storage is much less of a problem in a soft energy economy than in a hard one." So says the market today.

"In contrast to the soft path’s dependence on pluralistic consumer choice in deploying a myriad of small devices and refinements, the hard path depends on difficult, large-scale projects requiring a major social commitment under centralized management. ... The hard path, sometimes portrayed as the bastion of free enterprise and free markets, would instead be a world of subsidies, $100-billion bailouts, oligopolies, regulations, nationalization, eminent domain, corporate statism."

The article’s main error was about natural gas. Had the scientific community known in 1976 that U.S. gas is often unassociated with oil, quite abundant, and profitably recoverable from deep and tight formations, I’d have treated it separately from oil, and emphasized natural gas rather than advanced coal as a transitional technique used "briefly and sparingly to build a bridge to the energy-income economy of 2025." These insights weren’t obvious until the past decade.

One of the article’s most controversial claims  —  that soft and hard energy paths are mutually exclusive  —  unfortunately has been borne out.

The "temporary and modest (less than twofold at peak)" expansion of 1975 coal mining ended up at 2.16-fold due to the unnatural policy-driven suppression of gas and expansion of coal power. (Modern combined-cycle gas-fired power plants emerged only in the 1980s.) The climate-protecting vision of squeezing at least the oil part of the oil-and-gas wedge between efficiency and renewables is finally getting underway, and coal is now squeezed between efficiency, renewables and gas.

The article’s most consequential failure was not convincing policymakers to use the power of the U.S. example to slow or stop the spread of nuclear weapons. When I enlarged this argument in Foreign Affairs four years later, it again sank without trace because nuclear advocates dominated most nations’ energy policy, as they still do in many including our own. Thirty years after that, far stronger evidence in Foreign Policy still had little effect. Therefore we worry today about self-inflicted risks from North Korea, Pakistan and Iran.

One of the article’s most controversial claims — that the soft and hard energy paths are mutually exclusive, because each requires investments, infrastructures, institutions and attitudes that inhibit or preclude the other — unfortunately has been borne out. It’s visible daily as hard and soft technologies fight for market share and political influence.

Dangerous delays in the transition to a post-fossil-fuel and climate-safe energy system, the article warned in 1976, "are exactly what we can expect if we continue to devote so much money, time, skill, fuel and political will to the hard technologies that are so demanding of them."

Slowly but with gathering speed, markets have begun to triumph over incumbents’ political means of enforcing their natural desire to protect the old energy system, not enable the new. Yet the challenge of speeding that shift remains, while the imperatives of climate, public health, security, development and democracy heighten its urgency.