The two sides of the global business community faced off in Katowice last week, as the Trump administration launched its latest attempt to promote the global coal industry at the same time as leading business groups kick off a series of new sustainability initiatives.

The U.S. delegation generates headlines later in the day with an event on the sidelines of the COP24 Summit specifically designed to promote the wider use of fossil fuels, even as the global economy attempts to decarbonize.

A statement from the U.S. State Department said the event would "showcase ways to use fossil fuels as cleanly and efficiently as possible, as well as the use of emission-free nuclear energy."

The U.S. team hoped the event would build on a similar meeting at last year's United Nations Climate Summit and garner support from a number of other high carbon economies.

However, critics were quick to dismiss the meeting as a stunt, warning it would further isolate the United States after it sided with Saudi Arabia, Russia and Kuwait during the weekend to block a change to the summit's negotiating text that would have "welcomed" the recent IPCC report warning of the impacts more than 1.5 degrees Celsius of warming would have.

The United States sided with Saudi Arabia, Russia and Kuwait to block a change to the summit's negotiating text that would have 'welcomed' the recent IPCC report.

The alliance of fossil fuel exporters insisted the summit should only "take note" of the report, resulting in a lack of consensus that saw the section of the text dropped.

The row prompted fierce criticism from other delegations, scientists and campaigners, as well as predictions the row could escalate during the second week of the talks.

A number of leading United States-based businesses already are lined up to offer an alternative vision to the White House's coal-fueled approach and push back against President Donald Trump's latest tweeted warning during the weekend that the Paris Agreement was "extremely expensive." 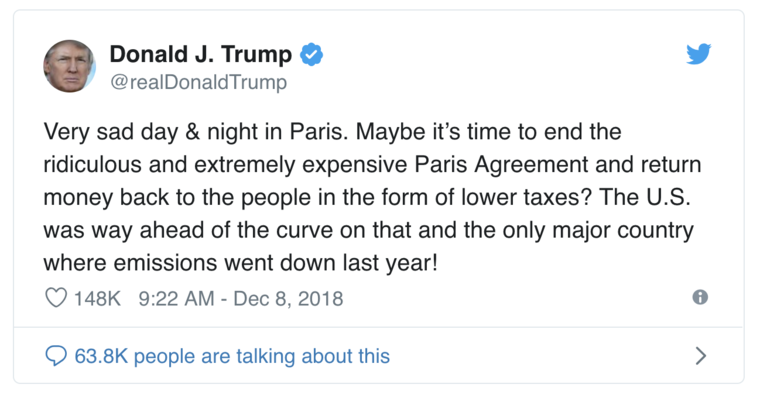 At another event on the summit sidelines, Michelle Patron, Microsoft director of sustainability policy, said that clean energy investment makes sense for many businesses.

"Since 2013, Microsoft has purchased more than 1.2GW of renewable energy on three continents and six states," she said. "We make these large investments because renewables are good for the future of our business and the planet. We're proud to stand shoulder to shoulder with so many other corporates in driving this market forward, and continue to look beyond procurement to spur even greater adoption."

"Since 2013, we have directed more than $70 billion to sustainable business activities that deliver financial returns and carbon emission reductions," he said. "Independent analysis has shown that our clean energy investments in the U.S. have created an annual average of 39,728 jobs, contributing a cumulative $30 billion in economic output."

It is an analysis echoed by a record-breaking group of global investors which last week brought together 415 firms with $32 trillion of assets to launch a new "Investor Agenda" that urges governments to strengthen their national climate action plans and enact policies that facilitate a faster transition to a low-carbon economy.

Global investors brought together 415 firms with $32 trillion of assets to launch a new 'Investor Agenda' that urges governments to strengthen their national climate action plans.

The group said the onus was on world leaders to tackle the "ambition gap" between governments' current commitments and the goals of the Paris Agreement, warning much of the investment community is hugely concerned by the prospect of "unacceptably high-temperature increases" and "substantial negative economic impacts."

The intervention came the same day as analyst firm MSCI published new research showing how institutional investors could be at risk of not fully assessing the climate change risk faced by companies in supposedly "cleaner" industries, indirectly affected by the risks associated with the shift to a low-carbon economy.

These "overlooked" industries have low direct carbon emissions, but high revenue dependence on companies with carbon-intensive operations and/or products, MSCI said. They include oil and gas equipment and services providers, heavy electrical equipment manufacturers and auto-parts and equipment firms.

The project will aim to facilitate cross-sectoral collaboration in a bid to scale up the deployment of pre-commercial and/or proven low-carbon technologies that are being rolled out too slowly across the power, transport, industry and buildings sectors.

"To avoid the most devastating impacts of climate change, we must achieve the Paris Agreement targets," said Maria Mendiluce, managing director at WBCSD. "That will only be possible if we transform the energy system at unprecedented speed and scale. Collaboration across the energy value chain as well as with financial institutions, local government and society is key to accelerating the energy system transformation."

The business body said that to meet the 1.5C temperature goal contained in the Paris Agreement, the global economy needed to deliver a level of emission reductions equivalent to tripling the current rate of renewable electricity deployment, switching all new cars to battery electric vehicles, and at least doubling the deep renovation rate of buildings.

Several reports warned that global emissions are set to rise this year across both industrialized and developing economies.

However, several reports last week warned that global emissions are set to rise this year across both industrialized and developing economies, with the deployment rates for clean technologies lagging far behind the trajectory required to meet the goals of the Paris Agreement.

WBSCD said the new initiative would aim to build on the success of its existing REscale project, which has sought to accelerate the rollout of financial mechanisms that support renewable energy projects, such as green bonds for renewable project and Power Purchase Agreements.

The new program aims to work across the energy, oil and gas, engineering, and financial sectors to explore how industries can jointly support "top-down" bolder decarbonization policies and deliver "bottom-up" action to drive low carbon investment. Specifically, companies supporting the initiative will analyze the business cases for existing low-carbon energy solutions and then share them so as to allow energy users to conduct "rapid assessments of technology options" and highlight where more the cross-sectoral partnerships are required.

"Altogether, this work will be embedded in guidelines for energy users on how to develop a low-carbon energy strategy that considers all energy end uses in a holistic manner and identifies combined, circular solutions," WBCSD said.

Separately, The Climate Group announced that four more major businesses — BT Group, E.ON, Schenker AG and Genesis Energy — have joined its EV100 group and pledged to accelerate the rollout of electric vehicles and deliver the "large-scale electrification of their fleets by 2030."

"Forward-thinking companies are forging ahead on electric vehicles to demonstrate leadership, reduce their emissions and ready their business operations for a low-carbon economy," said Helen Clarkson, Climate Group CEO. "Despite uncertain times internationally the economic opportunities are vast, and business is simply getting on with it. These ambitious commitments will help to tackle air pollution in our towns and cities and channel investment into smarter energy infrastructure. Every major company — and government — should be switching to electric transport."

Cities will have a critical role to play if the world is to move on to a 1.5C warming trajectory.

Meanwhile, the C40 group of global cities published a new guide that draws out the main conclusions of the recent IPCC report on more than 1.5C of warming that are relevant to urban policymakers.

It argues that cities will have a critical role to play if the world is to move on to a 1.5C warming trajectory, detailing how city leaders have an opportunity to move faster than other levels of government to accelerate the rollout of clean technologies.

"For more than a decade now, mayors of the world's great cities have been the loudest voices calling for bold and urgent climate action, because we are conscious of the threat it poses to our citizens," said Anne Hidalgo, mayor of Paris and chair of C40 Cities. "We have committed to deliver on the 1.5C target of the Paris Agreement because it is clear this offers the best hope of securing a healthy, prosperous and sustainable future for all citizens around the globe. Cities are ready to lead on the transformations necessary to secure the future that we want, the future we can trust."

The Trump administration's pro-coal pitch will command plenty of attention, but lots of investors, business leaders and policymakers in Katowice are more vocal than ever in their support of an alternative growth model.

Cop out: Can the UN Climate Summit deliver?

7 things to know about the U.S.-China climate deal

Your guide to Europe's 'Green New Deal,' the continent's new plan to get to net zero