Trump, COP22 and asking the hard questions on climate change

The Paris climate agreement is alive but likely headed for a new phase in limbo after a turbulent two weeks in global politics.

As the COP22 Marrakech climate talks drew to a close over the weekend, participating governments, businesses and advocacy groups backing the Paris agreement already ratified by 111 countries pledged to forge ahead with stated goals to draw down carbon emissions by the close of the century. The question now: what role the U.S. will or won't play in those efforts under a Donald Trump presidency, and how the rest of the world will respond.

“We’re still kind of re-calibrating and seeing what we think the impacts will be of the new administration," said Cynthia Cummis, director of private sector climate mitigation for the World Resources Institute Business Center.

In the meantime, Cummis is among the environmental advocates keeping the faith in the wake of COP22, despite early actions of the Trump transition team including appointing climate change skeptic Myron Ebell to the top interim post at the Environmental Protection Agency. As a counterpoint, the NGO this week announced that 200 corporations have voluntarily signed onto a WRI program focused on implementing "science-based goals" for cutting companies' carbon footprints.

“It demonstrates that corporate climate action is global and the momentum is proving itself to be unstoppable, regardless of political events," Cummis said. 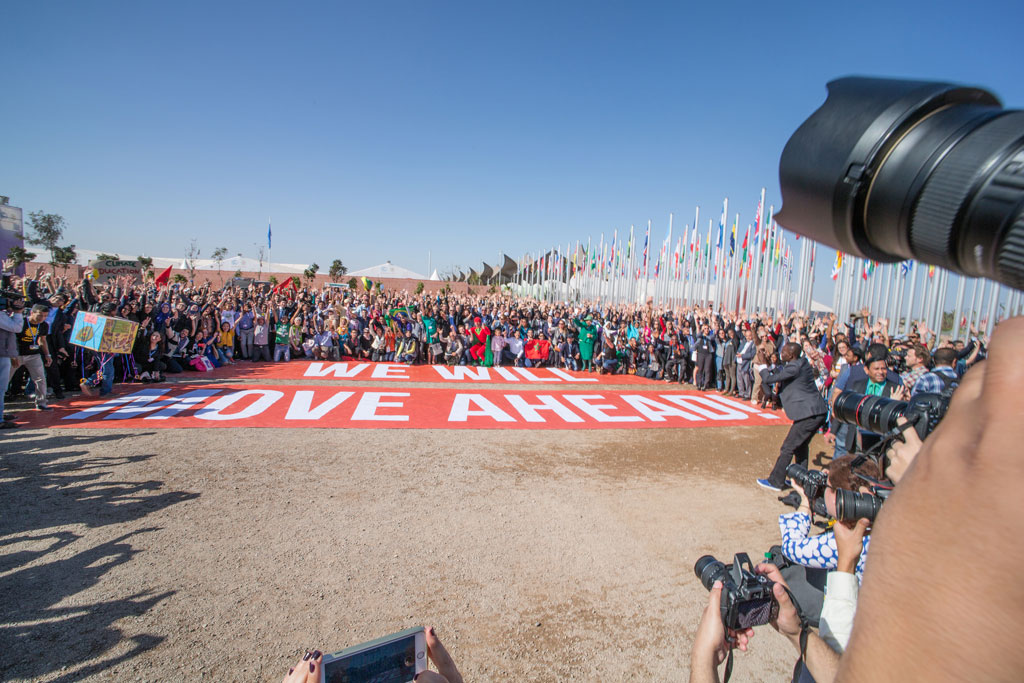 While there is sure to be no shortage of political handicapping in the weeks and months ahead on Trump's campaign promise to "cancel" the Paris agreement, it's also worth noting that the climate talks in Marrakech always represented a different kind of challenge for participants.

As an African nation with a legacy of colonialism that has in recent years given way to an evolving role as a manufacturing hub for multinational companies, Morocco provides a vivid example of the need for climate change solutions that don't just apply to industrialized North American and Western European countries.

On one hand, the country is moving forward with environmental policies also becoming more common in places like California, such as banning plastic bags. On the other, debate also continues to rage over thorny issues like pollution linked to burning waste for energy and skepticism about the local benefits of multibillion-dollar renewable power projects planned throughout the country and the disputed Western Sahara region.

In many ways, the financial questions swirling around COP22 are a microcosm for the broader economic issues surrounding global climate action.

First, there is the matter of scale, and whether lofty discussion about big ticket climate adaptation and clean energy projects will actually come to fruition quickly enough to phase down demand for fossil fuels in the near future.

COP22 President Salaheddine Mezouar expanded on the common refrain that this year's talks were all about moving from high-level agenda setting to putting the gears of change in motion, which he linked to larger-scale investment.

"Turning billions into trillions is indispensable," Mezouar said in a statement. He added that, "2017 must be the year of large scale projects, of mobilizing finance, and accessing financial facilities that will be necessary for adaptation."

Beyond the level of investment, negotiating a balance between public and private financing for climate mitigation also looms large. For environmental justice advocates, at stake is ultimately whether marginalized, poor or otherwise vulnerable populations will be overlooked in the rush to protect valuable property from the physical risks posed by climate change.

Private sector involvement is not a substitute for public finance.

Lidy Nacpil, an activist with the Asian Peoples Movement on Debt and Development, this week echoed a familiar sentiment that industrialized nations responsible for the bulk of emissions should also shoulder the bulk of financial responsibility for climate adaptation.

"At the end of these two weeks, we just want to express our extreme disappointment that no clear and concrete increases in climate finance pledges have been put forward by developed country governments," Nacpil said in a statement. “We’ve heard so much talk about leveraging private sector funds to address climate finance needs, but private sector involvement is not a substitute for public finance."

As in Paris during COP21, protestors also took aim at some corporate sponsors of the conference, particularly oil and gas companies accused of greenwashing.

On the other end of the spectrum, corporations and other so-called "sub-national" actors were also increasingly highlighted as potential catalysts for more aggressive action on climate issues even if a Trump presidency stalls federal progress in the U.S.

State and city governments have for years now been painted as potential enablers of localized environmental progress. So, too, have businesses extolling the parallel economic and environmental benefits of low-carbon energy and waste reduction efforts.

Groups like the RE100 and several others are focused specifically on scaling the market for commercial clean energy. Now, not unlike government officials looking to move from commitment to implementation on the Paris agreement, NGOs are busy urging companies that have signed onto new climate initiatives to follow through.

Out of the 200 businesses that have committed to the science-based goals initiative run by WRI, the World Wildlife Fund, CDP and the U.N. Global Compact, 26 have gone through the process of having those goals vetted by the NGO to ensure veracity. Among those that have gotten the green light are Coca-Cola, Dell, NRG Energy and Kellogg.

“We want to make sure we’re endorsing targets that we think really define best practice and leadership," said Cummis of WRI.

With COP22 barely in the rear view, next year's climate talks seem like a long way off — particularly given the way the geopolitical landscape has been turned upside down in the last few weeks alone. However, the venue for next year's climate talks, too, will underscore the urgency of curbing emissions contributing to higher average global temperatures.

The event will take place in Fiji, where some small coastal villages have already reportedly begun moving citizens away from rising seas.