What if the buildings of the future produced their own energy?

Imagine towering skyscrapers — buildings that have a large, glass surface area — working hard to generate energy for their occupants and the surrounding community. Is it feasible, and how would that be better than offsite generation?

By 2025, 68 percent of the world population is expected to live in urban areas, according to the United Nations’ 2018 Revision of World Urbanization Prospects. As the population concentrates in cities, alternative sources of energy must be considered to ensure the grid isn’t overtaxed and that energy usage remains sustainable.

Iyris, launched through a KAUST startup accelerator, develops building-integrated photovoltaics for indoor applications and facades, and windows for buildings and greenhouses that maintain transparency to visible light while maintaining the aesthetic quality of glass. The solar cells are made from a paint-like organic polymer that is transparent and coated layer-by-layer onto glass.

Solar cells made from organic polymers traditionally have been more expensive and less efficient than silicon — the core material in photovoltaic (PV) cells. The material used by Iyris is more like a paint. Electrodes and lattice-like, ultra-thin wires innervate the thin film that’s created that is then covered with another pane of glass. It’s a perfectly integrated solution, and it’s cheaper to produce than most PV materials.

Iyris provides another key advantage, especially in regions such as the American Southwest and the Middle East. We know that cooling in those climates — especially in hot, arid regions — is a major issue, and it will continue to be a huge problem as populations grow.

Where other scientists previously have made semi-transparent organic solar cells, by absorbing near-IR, Iyris reduces the amount of heat penetrating the glass. Less heat equals less air conditioning and lower energy consumption. Iyris could be key to powering skyscrapers in cities of the future.

The technology helps reduce the energy consumption of buildings by as much as 25 percent while generating energy, with additional infrared absorbing properties to manage the heat.

Iyris technologies are being piloted by Red Sea Farms, a startup founded by KAUST Professor Mark Tester and started with his university colleagues. Red Sea Farms is a pioneering, agricultural-based startup using Iyris windows to create a better environment for plant growth and to increase crop yield.

While the technology originally was developed for greenhouses with agricultural production in mind, the lessons learned pertaining to energy efficiency, sensor technology and redirecting energy hold great promise for urban environments. Large glass skyscrapers and other surfaces in an urban environment could provide the scale needed to take the cities of the future beyond the grid.

Cooling needs will become more critical as the world grapples with the effects of climate change. At the same time, we need to consider the impact of this on energy usage, especially as people flock to urban environments and population density increases. Solutions such as Iyris help tackle both sides of this problem by increasing energy efficiency while generating power.

Iyris is an example of the KAUST dedication to bridging the gap between science and application, bringing research along from an idea to a tangible, scalable solution. It’s a product of the KAUST Taqadam startup accelerator, which has graduated over 78 startups since its launch in 2016.

KAUST research focuses on addressing humanity’s most pressing issues, notably challenges related to food, water, energy and the environment. The university is proud to be a global champion for women in STEM.

Learn more about how KAUST is collaborating with industry to tackle global challenges. 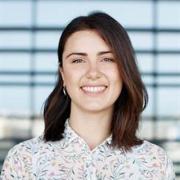 See all by Derya Baran