Turning the Tide of Commercial Fishing

I’m just back from a week at the Delaware shore where we ate lots of fish, as we always do at the beach. This is more of an emotional than a logical decision – crabs are about the only locally caught seafood – but the beach towns have plenty of seafood restaurants and fish markets, perhaps a relic from the day when the local catch was more plentiful. The fact is, fish markets in Bethany Beach look pretty much like markets everywhere; they are as likely to sell salmon farmed in Chile or “previously frozen” tuna as they are to offer anything caught nearby.

This is no accident, as I learned during my vacation from reading Four Fish: The Future of the Last Wild Food, by Paul Greenberg. No, it’s not exactly beach reading, but Four Fish is carefully-reported, well-written, insightful and surprisingly entertaining. A lifelong fisherman who writes for the Sunday Times magazine, Greenberg chronicles the history of four of the most popular fish on western menus – salmon, cod, sea bass and tuna – and explores the daunting question of whether fish, whether caught in the wild or farmed, can provide healthy protein in large quantities for the billions of people who enjoy seafood. How, in other words, can we catch or farm fish in a sustainable way, one that doesn’t deplete the supply or pollute the oceans?

With some notable exceptions, which I’ll get to in a moment, the history of fish is useful mostly as a guide to what should not be done. With ruthless efficiency, beginning with fish that live in rivers or are close to shore, and then pursuing those that live farther out, fishermen have deployed bigger and bigger boats, better equipment (like the ability to deep freeze tuna aboard ship) and sophisticated technology to exploit one species of fish after another. When popular fish are no longer abundant – stocks of cod famously collapsed in Georges Bank in the 1990s, and Atlantic salmon have all but disappeared – the seafood industry then set out to farm fish in large numbers, with mixed results. 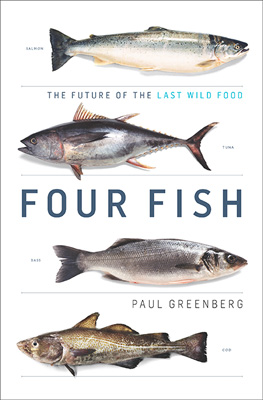 Most of this was invisible to those of us who enjoy fish. As Greenberg writes:

What we have seen up until now, with both the exploitation of wild fish and the selection and propagation of domestic fish, is a wave of psychological denial of staggering scope. With wild fish we have chosen, time after time, to ignore the fundamental limits that laws of nature place on ecosystems and have consistently removed more fish than can be replaced by natural processes. When wild stocks become overexploited, we have turned to domestication. But the fish we have chosen to tame are by and large animals that satisfy whimsical gustatory predilections rather than the requirements of sound ecologically based husbandry. All these developments have gone on underwater and out of sight of the average modern seafood eater.

It need not be so. Remember, after all, that the entire global fishing industry rests on the privatization of a public resource, the oceans. But, as Greenberg notes, ocean policy has mostly failed to move us closer to a sustainable way of catching or producing fish. Even fisheries certified as sustainable may not be so; they often reflect compromises that favor commercial interests over science.

Still, the news isn’t all bad. “Wild fish globally are declining,” Greenberg writes, “but the examples are science-based successes are marked, accurately documented, and clearly replicated.” Some things that are working:

The polyculture of fish: We’ve learned from large-scale corn and soy farming that monocultures (farming the same crop on the same land, again and again) are bad for the environment. This is true of fish farms, too, particularly salmon aquaculture. It turns out that as much as we love salmon, they aren’t especially well-suited for farming, partly because they require lots of feed, thereby depleting the ocean of forage fish.

An intelligent alternative is a practice called integrated multitrophic aquaculture, or IMTA, pioneered by a scientist named Thierry Chopin who works in the Bay of Fundy in Atlantic Canada. Greenberg explains:

IMTA mimics nature and, as it happens, provides diverse revenue streams. Mussels can be sold for food, of course, and seaweed is an ingredient in food, cosmetics and textiles. (I wrote about Thierry Chopin last spring in The High Cost of Cheap Food.)

Saving the whales: A Greenpeace-led campaign to halt commercial whaling led a governing body called the International Whaling Commission to set a “zero catch quota” for whales back in 1985. This was, Greenberg writes,

a complete and total world moratorium on hunting an entire scientific order of animals. It was the broadest and most far-reaching act of kindness humanity has ever bestowed on another group of species.

Bluefin tuna, he goes on to say, represent a “very whalelike dilemma.” They are a big fish and, as a result, there aren’t that many of them. They range far and wide. They are declining in number. “They are in all respects an unmanageable fish,” he says. Maybe, he says, it’s time to take them off the menu, as was done with the Give Swordfish A Break campaign of the late 1990s.

Farming efficient fish: In western Massachusetts, an ecologist named Josh Goldman started a company called Australis Aquaculture that produces a fish called a barramundi that is fertile, disease-resistant and able to live on vegetarian feed. His goal is to create a healthy protein – barramundis make omega-3 fatty acids – with as few inputs as possible. His challenge is finding consumers who want to eat the fish.

Tilapia and a Vietnamese fish known as tra are also abundant, low-cost and close to environmentally benign, when farmed properly. “Nature seems to be telling us, in the form of tra and tilapia, that we might have found an industrial fish that works,” writes Greenberg.

Home from the beach, I’m back to my mostly vegetarian diet. Next time I stop at the seafood counter, I’ll look for fish that are well-farmed or sustainably caught and try to remember that, as Greenberg writes, “eating the last wild food is, above all, a privilege.”