The Twins' Target Field Scores as a Green Building All-Star

The council, through its Green Building Certification Institute, conferred the rating on Target Field on Thursday, just in time for the ball club's first home opener at the new stadium on Monday.

The Washington Nationals' ballpark, so far the only other MLB stadium to achieve green building certification, also has LEED-Silver certification, which was awarded in 2008. However, Twins' management emphasizes the teams are not tied: Target Field scored 36 LEED points in acquiring its rating; National Park had 34.

Building the open-air ballpark in Minnesota's historic Warehouse District posed a number of challenges, including its location -- the site sits on a former brownfield -- and securing funding to support the green design and pursuit of LEED certification.

In order to build the park, contaminated soil was treated and replaced. Groundwork included the installation of a giant cistern, which is buried beneath the warning track. Water collected in the cistern will be filtered and used for irrigation and hosing down the seating bowl. The site was a made a hub for public transportation by buses, commuter trains and light rail service. 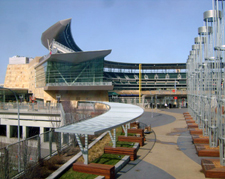 "Target Field is baseball's most urban ballpark, and the site constraints we faced were actually paramount to achieving LEED certification," said Earl Santee, senior principal at Populous, the design firm that managed the certification process for the ballpark.

"With the addition of new, immediate access to public transportation at the ballpark, we've helped to bridge the site to its urban surroundings as a model for positive growth," Santee said in the team's announcement of its certification.

Local legislation related to the ballpark passed in 2006 set LEED certification as a goal of the project, if grant funds were available to support the strategy. But the construction timetable for the complex project couldn't accommodate waiting for the outcome of outside grant requests. So the Twins provided $1.5 million and the Minnesota Ballpark Authority contributed $1 million in additional resources in December 2007.

In the end, the cost to pursue LEED certification was less than .5 percent of the overall project -- an investment ballpark leaders expect will be more than paid back by savings in energy and other operational costs.

"The (ballpark) authority is pleased that our investment will pay dividends for years to come as fans learn more about the importance of sustainable design when they visit Target Field," Minnesota Ballpark Authority Chair Steve Cramer said in a prepared statement. 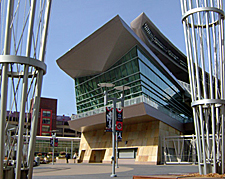 Other green design elements at Target Field include:

Populous, established in 1983, has made its name in designing major sports venues, convention centers and civic areas around the world. Target Field is the fourth sports project in the company's portfolio to earn LEED certification. The firm has worked with 24 MLB franchises, 30 NFL franchises, 80 professional and civic arenas, 40 major soccer and rugby teams, 120 universities, 40 convention centers and 29 equestrian clients.

Mortenson Construction was the builder for the Target Field project. Based in Minneapolis, the firm has offices in six U.S. cities, Canada and China. The company built several landmarks in the Twin Cities area, including the MacPhail Center for Music, Wells Fargo Tower, the Minneapolis Central Library and the Minneapolis Convention Center and Expansion.

Images courtesy of Populous and the Minnesota Twins.