[Editor's Note: For more on Walmart's climate announcement, see coverage at GreenBiz.com and a post from Elizabeth Sturcken of Environmental Defense Fund.]

Until now, Walmart's bold sustainability efforts were marred by a glaring omission.

The $405-billion a year retailer has worked hard since 2005 to save energy, reduce waste and sell more sustainable products.

But it resisted pressures to reduce or hold steady its own greenhouse gas emissions. In fact, its carbon emissions have grown, as the middle graphic below shows. (There's a cleaner version in WMT's responsibility report, here.) When it comes to global warming, Walmart would appear to be doing more harm now than it was three or five years ago. 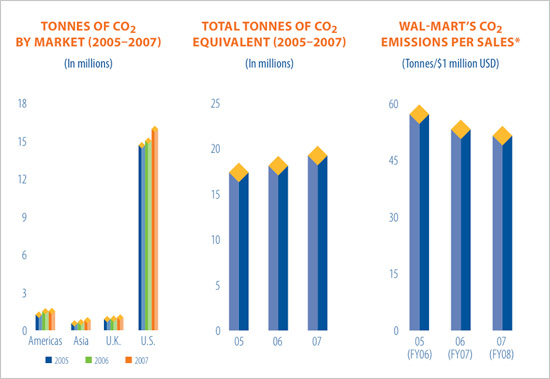 Today, Walmart made its first major commitment to reduce greenhouse gases -- although, in typical WMT fashion, rather than set a tough goal that might affect its own growth curve, the company plans to turn up the pressure on its thousands of suppliers to reduce their emissions.

Here's how a press release from Walmart and its lead environmental partner, Environmental Defense Fund, explained it:

Walmart today announced a goal to eliminate 20 million metric tons of greenhouse gas (GHG) emissions from its global supply chain by the end of 2015. This represents one and a half times the company's estimated global carbon footprint growth over the next five years and is the equivalent of taking more than 3.8 million cars off the road for a year.

The footprint of Walmart's global supply chain is many times larger than its operational footprint and represents a more impactful opportunity to reduce emissions.

You can think of this as the biggest carbon offset in global history, and I'm being only partly facetious when I say that.

Walmart wants to grow -- the company is expanding in the U.S., and elsewhere in the world -- and it will likely grow its own carbon footprint, directly and indirectly, as it sells more stuff and builds new stores, most in suburbs and rural areas, surrounding by acres of parking. But the companies that supply WMT -- that is, Procter & Gamble, Unilever, Clorox, Coca-Cola, PepsiCo, Kraft, General Mills, Sony, Apple, HP, Dell and hundreds more, all of whom must be wondering about their carbon emissions right now -- will be asked to make things more efficiently, use less energy, buy more recycled content and the like.

As Leslie Dach, a top Wal-Mart executive, put: "It is really a Walmart approach to solving a problem.... The size and scale of this company can be put to use to make a real difference in the world."

That's no doubt a good thing. Better, as one of my sources told me, to improve practices at 10,000 factories around the world than simply to make WMT's operations more efficient. "Sensational" was how Fred Krupp, the president of Environmental Defense Fund, described it, during a lovefest with Walmart CEO Mike Duke, which was webcast on Treehugger, of all places.

Duke praised EDF, saying: "Our NGO partners have pushed us and been patient with us."

Krupp returned the favor. EDF has planted two staffers in Bentonville, Arkansas, to work closely with WMT, and he said: "I don't think there's any better money we are spending anywhere."

Specifics about how the carbon reduction effort would work were few, understandably so since it is new. "This is uncharted waters," said Elizabeth Sturcken of EDF. (Here is her excellent analysis, with some detail on initiatives in packaging and around dairy products.) Right now, there's little data available to measure the carbon impacts of the products that Wal-Mart sells, particularly if you want to include how they are made, shipped, used and thrown away, as WMT does.

Walmart said it would start with the products that have the most "embedded carbon" and seek GHG reductions that are "economically viable." The company has already had success getting suppliers to use smaller packages, from concentrated detergents to lighter-weight DVD cases.

Walmart itself, though, wants to get bigger. Duke was straightforward about this. "We are a growth company," he said. "We want to add square footage. That's the reality of our business."

Critics are unsatisfied. Here's reaction from Stacy Mitchell, a senior researcher with the New Rules Project, a program of the Institute for Local Self-Reliance:

By focusing on suppliers, Wal-Mart continues to deflect attention from the enormous greenhouse gas implications of its own business model. Wal-Mart is rapidly expanding in China, Mexico, and other countries, where it is destroying neighborhood businesses and replacing them with an auto-oriented form of big-box shopping that is highly polluting. Under Wal-Mart, local and regional systems of economic production and distribution are giving way to global supply chains, which almost invariably means longer distances and greater fuel consumption.

She's got a point, but the story is more complicated, for a couple of reasons. (Warning: geeky analysis ahead.) First, look at the graphic on the far right, above. Walmart is reducing its GHG emissions per unit of sales, meaning that it's more efficient. So, if its competitors are not doing as well in terms of efficiency, and if it takes market share away, then it's possible that WMT can sell more stuff and the planet will be better off. For example, if Walmart sells lots of Fair Trade coffee, and the locally-owned convenience store around the corner sells less conventional coffee, that's a good thing. Local isn't necessarily better.

Second, and paradoxically, Walmart is actually becoming more local. For example, Walmart has made a concerted effort to buy more from local farmers. Corby Kummer has a terrific article about this in the current Atlantic, in which he asks: Will Walmart and not Whole Foods save the Small Farm and Make America Healthy? The company, he reports, "wants to revive local economies and communities that lost out when agriculture became centralized in large states." Best quote in the story is from Michelle Harvey of EDF who says: "It's getting harder and harder to hate Walmart."

True enough. Nevertheless, in my ideal world, Walmart would set a cap on its own emissions, sell used goods as well as new, nudge people to buy vegetables instead of meat, and share profits with its workers. In today's world, Walmart will try to grow (profits) and shrink (pollution) at the same time. That's about all we can ask of a big company until we, collectively, can find a way to decouple economic growth from environmental harm. That's a job too big even for Walmart.