The "ecodistrict" project required cooperation from the city, architects and a corporate neighbor.

Historically speaking, the concept of district heating is far from new — the village of Chaudes-Aigues Cantal in France has been using a geothermal version for centuries. More recently, cities such as Copenhagen and Boston have started using this approach to keep buildings warm in the fall and winter by capturing and converting "recycled" thermal energy generated by other neighborhood systems, such as nearby power plants or waste treatment facilities.

Despite the resulting, well-documented efficiency benefits, it is less common to see this alternative used for a corporate campus. That didn't discourage tech giant Amazon from investing in an "ecodistrict" design of this nature — rather than a conventional boiler system — that eventually will be used across its entire new 5-million-square-feet headquarters in Seattle.

Generally speaking, ecodistricts are a public-private approach to urban development that considers investments in infrastructure for energy, heating and cooling, and water management more holistically — with an eye to prioritizing resource conservation and efficiency.

In Seattle, the system that already has warmed some Amazon offices in "The Regrade" neighborhood for the past two winters captures and reuses excess heat from a non-Amazon data center across the street. It doesn't save the e-commerce and cloud services company money compared with traditional heating options, at least right now, because of the upfront investment.

But the unique installation is far more energy-efficient than conventional options, according to Amazon's sustainability team. It also carries tangible sustainability benefits for Amazon's partners, including the city of Seattle and the Westin Building Exchange, which runs the 34-story "carrier hotel" providing source of the energy.

"I'm familiar with other properties that have used waste heat from a data center, but not across owners," noted Mike Moriarty, the senior engineering manager for the site, in a blog post. "That's what made this one a little unique."

The system works by piping the heat generated by the data centers in the Westin building into Amazon's central plant.

The collaborative effort involves local development officials for four undeveloped blocks in the so-called Denny Regrade area north of Seattle's central business district; and the sustainability team at Westin, which hosts more than 250 telecommunications and internet businesses in its facility. It was apparently the brainchild of Clise Properties, which sold Amazon the land for the new headquarters; architect McKinstry was instrumental in design and construction; and clean energy investor Craft3 contributed $886,000 in financing, among other partners.

From a high-level point of view, the ecodistrict contributes toward Seattle's vision of becoming carbon-neutral by 2050. Over time, it could save Amazon the equivalent of more than 80 million kilowatt-hours of electricity over the next 25 years, eliminating the carbon dioxide emissions associated with burning 65 million pounds of coal. 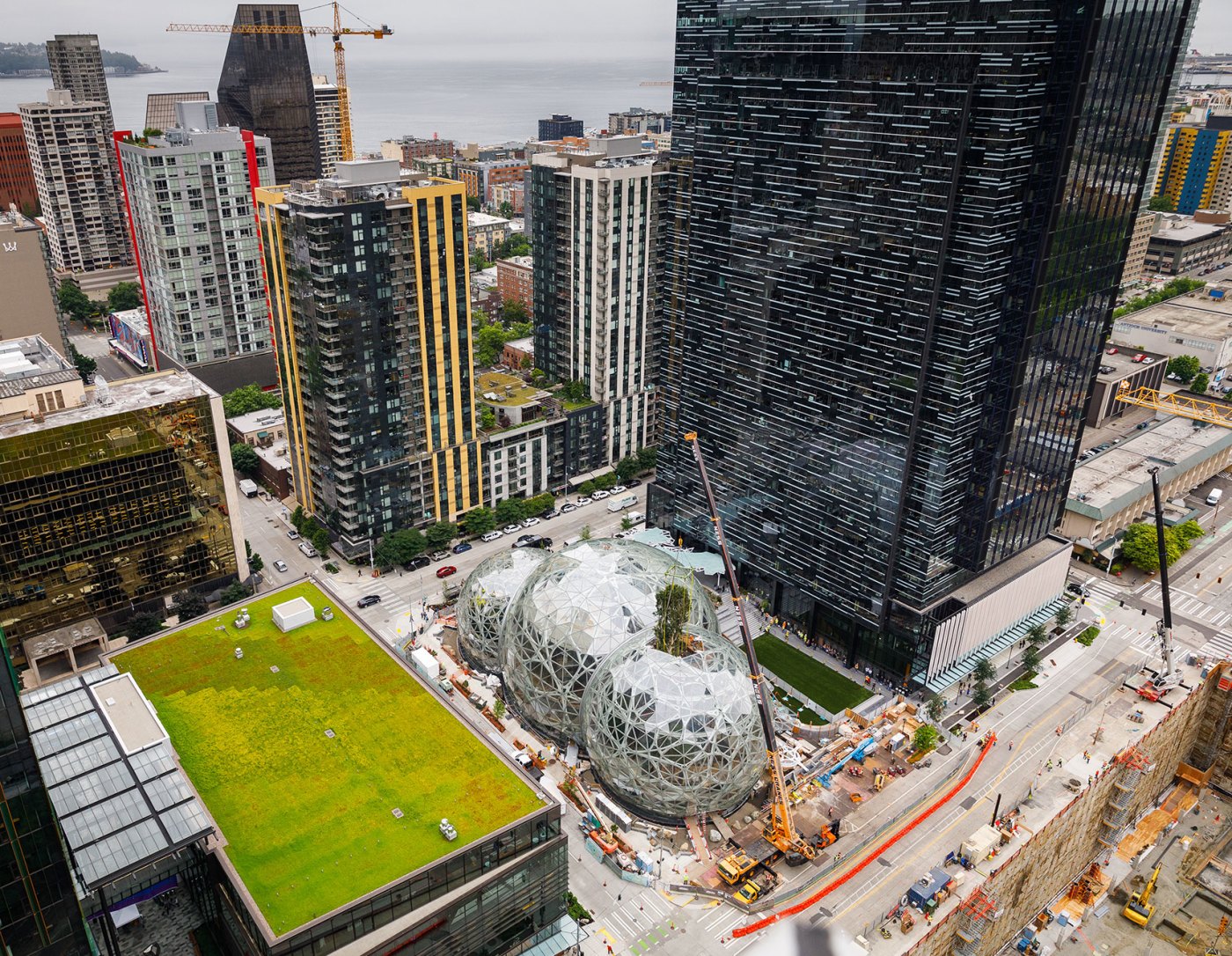 The system works by piping the heat generated by the data centers in the Westin building into Amazon's central plant, rather than venting it into the atmosphere through rooftop cooling towers, as traditionally might be done. When the water arrives at Amazon's facilities, it is run through five "heat-reclaiming" chillers and concentrated — a process that raises the temperature from 65 degrees Fahrenheit to about 130 degrees Fahrenheit.

That's enough to distribute the heat through underground pipes and radiant coils, with backup boilers standing by for cases of extreme cold. This is a virtuous circle: The cooled water makes its way back over to the Westin building, where it cools off the data center equipment.

The system can be scaled over time; the intention is for it to support the entire campus when construction is complete. "We've proven that you can do it," Moriarty said. "And as time goes on, we'll do it more efficiently."

We've proven that you can do it.

As you might expect, this isn't the only way Amazon is taking steps to manage its real estate more sustainably. Aside from the unusual heating approach, the company has planted green roofs on top of two of the buildings in the complex that filter rainwater and reduce the cooling loads. Overall, six of Amazon's Seattle facilities have earned LEED Gold certifications. The Doppler Tower that hosts the systems for the ecodistrict is on track to earn an Energy Star rating of 98 for its first year (out of a possible 100). And the tech giant's investments in clean power, especially wind, are well-documented.

Proof that ecodistricts work at scale

According to C40 Cities, Copenhagen's district heating system designed back in 1984 is one of the largest in the world — it can support up to 97 percent of the city, home to about 600,000 people at the end of 2015, as well as homes and businesses in the nearby region.

The system uses waste heat from electricity production that was previously piped into the sea and it diverts about 203,000 tons of oil on an annual basis (an estimated 665,000 tons of CO2). It is supported by a 807-mile network of pipes that connect four combined heat and power plants, four waste incinerators and more than 50 peak-load boilers.

The "Green Steam" district heating project in the city of Cambridge near Boston is more recent. It was designed by Veolia Energy, and required an investment of about $112 million. The installation supports about 250 businesses in the area, occupying 45 million square feet of office space, according to Veolia's website. The project is reducing non-transportation carbon emissions for both cities by about 6 percent.