Viscose rayon is known to many as a "green" material, but the secret of its manufacturing process is far more insidious.

The following is adapted from the book "Fake Silk: The Lethal History of Viscose Rayon."

When I say that I have been writing a book on rayon, the initial response frequently is, “Radon? That’s radiation, isn’t it?”

My attempt at a clarifying follow-up and the ensuing exchange typically runs: "Not radon, rayon, the synthetic textile."

"Oh, didn’t they stop making that years ago — it was invented for parachutes or something in World War II, right?"

"Actually, rayon has been around since the turn of the last century — about 1900—and it’s still being made. Maybe you know it better as viscose?"

"Viscose? I didn’t know that was rayon. I thought viscose was a green product, not a synthetic."

“Viscose rayon is based on cellulose. That part may be 'green,' but the chemical used to make the viscose isn’t. It’s a toxic chemical called carbon disulfide."

"Does that mean viscose isn’t safe to wear? I’d better go through my wardrobe!"

"No," I reassure at this point. "It’s only the workers who make it that suffer, and maybe the surrounding environment." Consumer angst allayed, the conversation usually turns to some other topic. 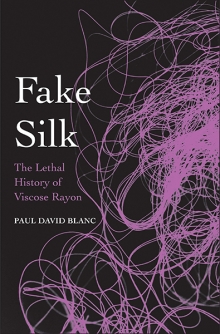 I understand fully. Occupational disease is not the standard stuff of casual conversation. Admittedly, viscose is pretty far from central to almost anyone’s thoughts. Moreover, carbon disulfide, the toxic agent prerequisite to the making of viscose, is an unknown entity to anyone but a practicing chemist. Even most physicians have never heard of carbon disulfide unless they happen to remember it from an organic chemistry lab class they were forced to suffer through in premed. But the story of viscose manufacturing and viscose-caused disease, by rights, should not be obscure. It deserves to be every bit as familiar as the cautionary tales of asbestos insulation, leaded paint, or the mercury-tainted seafood in Minimata Bay.

Throughout most of the 20th century, viscose rayon manufacturing was inextricably linked to widespread, severe and often lethal illness among those employed in making it. Viscose is behind another product closely related to rayon — cellophane — and both rely on carbon disulfide as their key manufacturing constituent. Viscose, a technological innovation in its day, once was a very big business. In fact, it was one of the first truly multinational corporate enterprises, having achieved this status in the period just before World War I. A bit later in the 20th century, during the Great Depression, the viscose business did not suffer appreciably. Rather, it flourished. Viscose went on to assume a highly profitable position as a strategic matériel on both sides in World War II.

Throughout most of the 20th century, viscose rayon manufacturing was inextricably linked to widespread, severe and often lethal illness among those employed in making it.

Peace finally came; viscose went from strength to strength. For the Courtaulds company (phoenix of the post-imperial British textile industry) and for the behemoth state-owned enterprises of the Eastern bloc, rayon was pivotal. During the same period in the United States, DuPont held on to its lucrative near monopoly on cellophane, fighting an antitrust ruling all the way to the Supreme Court. After the industry’s midcentury apogee, viscose manufacturing found itself in the vanguard of those hazardous industrial processes exported to the developing world, starting in the 1960s and continuing through the decades that followed. Even now, viscose is still very much with us. Its successful rebranding as a renewable, eco-friendly product cleverly sidesteps the inconvenient reality that carbon disulfide, whether mixed with soft wood pulp or bamboo or straw, is anything but green.

The basic industrial manufacturing steps employed in making viscose never have been much of a trade secret. Cellulose wood pulp is treated with caustic soda at a high pH; carbon disulfide is added to that solution; the mix is churned, allowed to "ripen" and then mixed with more caustics to form a syrupy semiliquid that is the eponymous viscose of the process. The viscose syrup is forced through tiny spinning nozzles submerged in a bath of sulfuric acid, like sprinklers irrigating a Hadean garden. It is in this unkind environment that the extruded filaments of viscose rayon fibers coagulate and grow. Replace the tiny spinning holes with a long, thin slit and one produces viscose-based film (that is, cellophane). Along the way there have been variations on this theme, but the basic story line has stayed the same.

Carbon disulfide has remained a constant in the mix. This chemical has the nearly unique ability to engage cellulose molecules, lining them up for guidance into a new form. Then, at just the right moment, the carbon disulfide lets go of the cellulose. Unless the process is engineered with care, the place where the "carbon disulfide lets go" is directly into the factory air breathed by viscose workers, with the rest wafted out into the surrounding environment. Just as the basic process for making viscose is well established, the most dramatic effect of carbon disulfide on humans has been long appreciated. For more than 150 years, considerably in advance of rayon’s invention, the chemical’s potent and special toxicity has been clearly recognized. Carbon disulfide’s industrial debut was as a vulcanizing agent in the rubber trade, back in the middle of the 19th century. Trouble was noted very soon after the chemical was first introduced. The effect was hard to miss: carbon disulfide exposure led to acute insanity in those it poisoned.

In the many years that followed, more and more medical evidence documented in exquisite detail the many ways in which carbon disulfide adversely affects the nervous system.

In the many years that followed, more and more medical evidence documented in exquisite detail the many ways in which carbon disulfide adversely affects the nervous system. Besides frank insanity, poisoning can be manifested in subtler personality changes. Carbon disulfide causes toxic degenerative brain disease and acts by damaging the sensory capacity of nerves (including those responsible for vision). After years of exposure, even more insidious carbon disulfide damage appears through increased risk of heart disease and stroke. Only in recent decades have these latter effects been established conclusively. Sophisticated epidemiological investigation was required to confirm the unusual pattern of individual cases that were occurring among viscose workers: disease that was happening both too frequently and among those at too young an age typically to suffer from these problems.

Despite its shocking legacy, viscose’s history is almost completely unknown. Even those otherwise well versed in issues of public health are largely unaware of this story. Yet it is a history hiding in plain sight. In large part, I am motivated by a desire to memorialize the terrible suffering that has occurred. Almost everyone not only knows about radon — unlike rayon — and many can even name a specific victim: Madame Curie, who succumbed to leukemia, almost assuredly due to her occupational exposure to radiation. I want those who paid the full price for carbon disulfide’s use to be as well remembered. And I intend to name names. This may not be possible for the unrecognized thousands whom carbon disulfide made ill, although here and there personal traces of individuals can be detected. It is far easier, however, to identify the perpetrators. Indeed, some of them are still in business today, albeit after having been renamed, acquired, spun off and then remerged through a string of new, also-known-as names and business acronyms. I also believe that this past history is highly relevant to other manufacturing innovations of today and tomorrow, processes that, like viscose production, may endanger worker health, threaten to degrade environmental quality, or compromise consumer product safety.

"Fake Silk" is most certainly about illness, about the disease and death that the viscose industry caused in its factories. And it is about technological innovation, an engine fueled by carbon disulfide that churned out novel products for an eager consumer public. Fake Silk is also about economics. After all, this was an industry that helped coin a new term, "duopoly." Referring to a market with only two sellers, duopoly characterized the comfortable arrangement between DuPont and Courtaulds’ U.S. subsidiary in divvying up the lucrative American viscose business. More than that, economic profit has always been at the heart of viscose’s power, whether that was parlayed by robber barons, war profiteers, state capitalists or, in our own time, savvy players in a globalized market. Yet most of all, "Fake Silk" is about people. Some of them are truly despicable, but many were honorable women and men and more than a few were quite heroic. In just over a century of viscose’s history, five generations have toiled in it and, before that, three worked with carbon disulfide–tainted rubber. This may not be the full 10 generations that traditionally mark the passage of time from Adam to Noah, but it is still a significant slice of the human experience. I know that I cannot do full justice to that, but I hope never to lose sight of the real people who lived the story told in these pages.

See all by Paul David Blanc