Understand COP21 in these 7 graphics

Understand COP21 in these 7 graphics

Today marks the third day of COP21, a key milestone in the global effort to combat climate change. For the next two weeks, representatives from more than 190 countries will work towards creating a legally binding and universal agreement that spells out how countries will cooperate on climate change for decades to come. A strong Paris agreement can send the signal to the world that the global transformation to a climate-resilient, zero-carbon economy is underway.

Here’s a visual look at recent progress the world has made, as well as what needs to be done in Paris and beyond to truly overcome the climate change challenge:

From Copenhagen to Paris

Five years ago and ahead of the Copenhagen climate summit (COP16), 100 countries submitted pledges outlining their plans to take climate action by 2020. 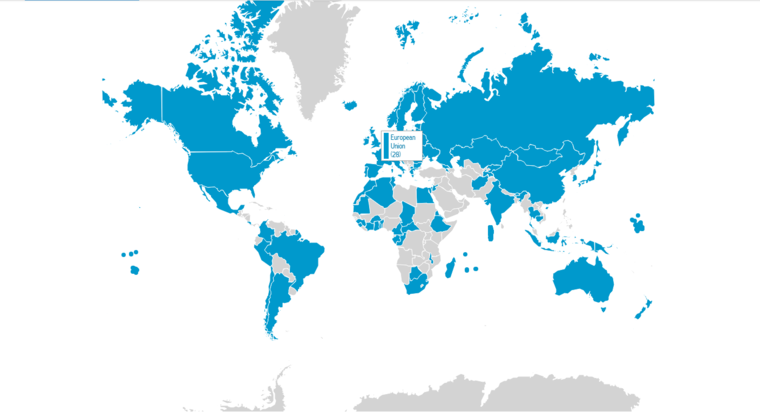 Since then, momentum has been building. In the lead-up to Paris, 176 countries submitted detailed climate action plans (known as Intended Nationally Determined Contributions or INDCs) to show how they’ll act on climate change after 2020. That’s a 76 percent increase over the number of countries submitting national climate plans ahead of Copenhagen. These plans are important because they help paint a picture of how the world collectively will tackle this global challenge.

Action from the world’s top emitters

Understanding how each country plans to respond to climate change is important, especially when you consider that the top 10 emitters are responsible for 72 percent of global emissions. All of them — China, the United States, the EU, India, Russia, Japan, Brazil, Indonesia, Mexico and Iran — have submitted INDCs. All countries address mitigation in some form, and almost all of them include a concrete greenhouse gas (GHG) mitigation target. For example, China plans to peak its emissions around 2030, and the European Union plans to reduce its overall emissions at least 40 percent below 1990 levels by 2030. 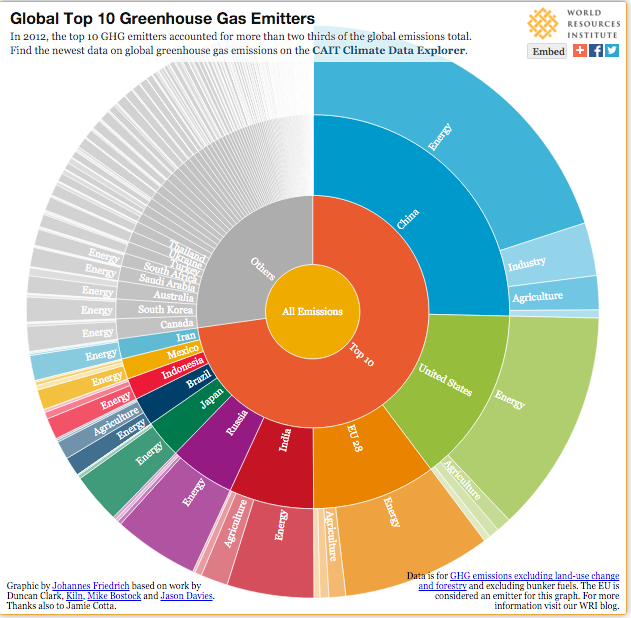 A growing supply of renewable energy

Each country decides its own plan to combat climate change based on national circumstances and capabilities, which means that each INDC looks different from the next. One action that many countries have in common is a plan to increase clean energy supply and shift away from carbon-intensive energy sources. More than 80 percent of the national climate plans submitted in 2015 include clean energy plans. Implementation of the national climate plans from world’s top eight emitters is projected to collectively double their renewable energy supply. 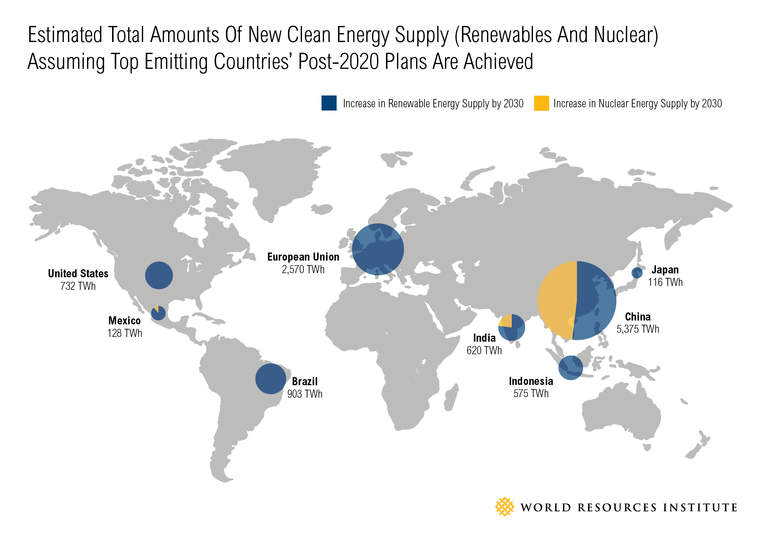 While these national climate pledges are encouraging, they are not enough to limit global temperature rise below 2 degrees Celsius to avoid the worst climate impacts, nor do they go far enough in tackling the serious damages already felt by the most vulnerable communities around the world. In fact, based on the INDCs submitted, studies show that the world is still projected to warm by 2.7-3.7 degrees by 2100. 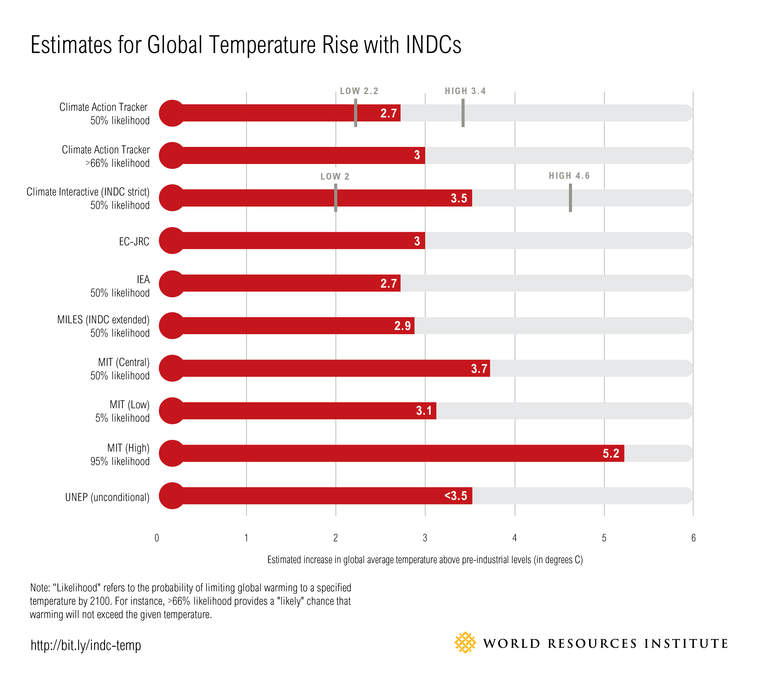 Staying within the carbon budget

Lowering global carbon emissions is crucial because the world has only a fixed amount of carbon dioxide that it can emit while still maintaining a chance to avoid warming above 2 C. This emissions cap is known as the carbon budget. 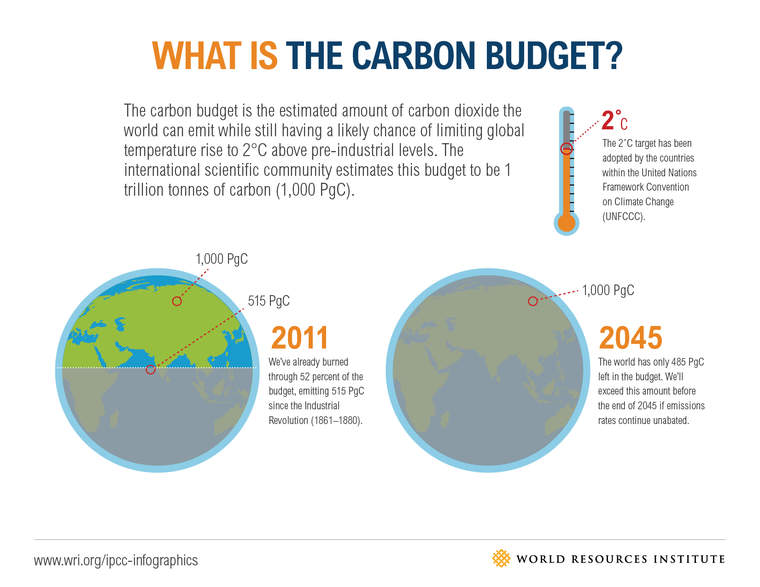 Exceeding the carbon budget could bring increasingly disastrous impacts in the form of drought, wildfires and extreme weather. 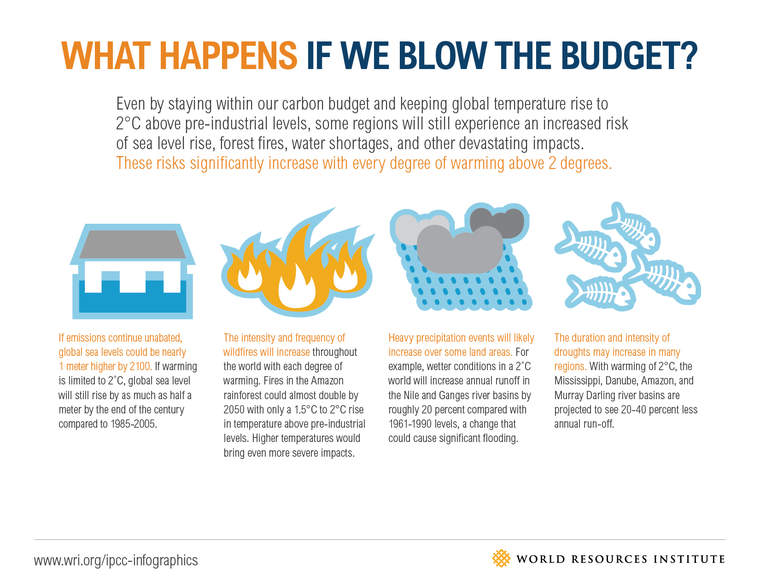 The Paris agreement can put us on a better path

In order to prevent some of the worst impacts of climate change and set us on a path to limit warming to 2 C, the world needs to limit emissions to 42 gigatonnes CO2e in 2030. The INDCs that countries have submitted so far would put the world on an emissions pathway that is still too high. But if the Paris agreement includes key elements that send the right signals to the world, then countries, businesses, investors and innovators would have the motivation and incentives they need take additional action. In 2030, this action could reduce emissions by an additional 5 gigatonnes CO2e beyond what the INDCs could achieve on their own. 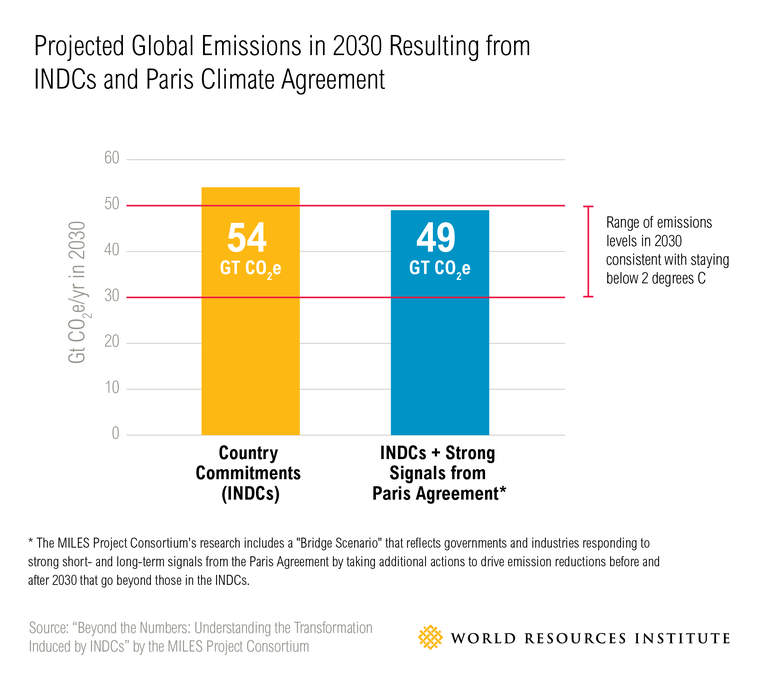 COP21 is a critical moment. Over the next two weeks, world leaders should work towards a climate agreement that will catalyze the transformation to a climate-safe, low-emissions world. The Paris agreement can and must be a turning point. The well-being of billions depends on it.

Here's why Paris is not another Copenhagen

6 takeaways from the Paris climate agreement