The food manufacturing sector encompasses a massive range of small and large businesses throughout the United States, and a growing population guarantees strong demand. Barely dented by the 2008 recession, the industry has enormous untapped potential for saving money and regulatory compliance costs with pollution prevention.

Food manufacturing employs millions and pumps billions of dollars into the economy. The industry is made up of several subsectors, sometimes referred to by their NAICS code. These sectors range widely, from grain or oilseed milling to seafood production. However, they all involve processing various raw food items into edible consumer products.

Through its National Emphasis Areas, EPA’s pollution prevention program focuses on possible solutions that companies can use to improve their environmental performance. 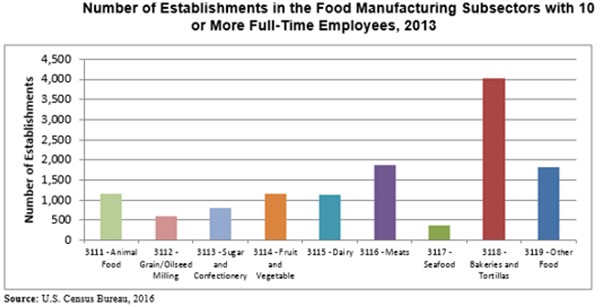 1. Food as part of the economy

Among the nine subsectors within food manufacturing, the most prominent are meats, grain or oilseed milling and dairy, which contribute 56.1 percent of the industry’s value of food manufacturing shipments, or the dollar value of goods shipped by businesses in the food processing industry.

They contribute the largest economic value to the industry, even though they have fewer facilities than other subsectors, because a few large companies, such as Tyson Foods, dominate these sectors. In contrast, subsectors such as bakeries and tortilla manufacturers comprise many smaller companies.

Food manufacturing employs millions of people and pumps billions of dollars into the U.S. economy.

The process of manufacturing food involves toxic chemicals, which companies release into the environment through several pathways. The releases from food manufacturers across the subsectors are reported in EPA’s Toxic Release Inventory (TRI). 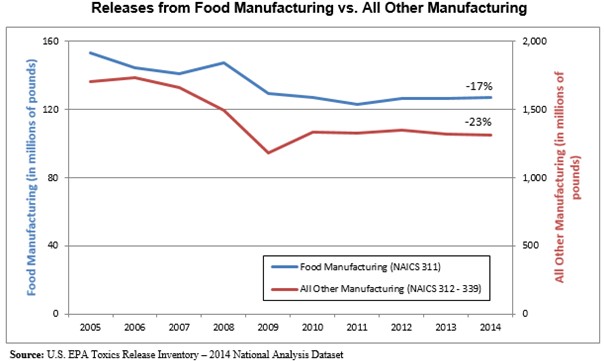 Compared to the other sectors, however, the food manufacturing industry lags in reducing chemical releases. There is an opportunity for this sector to increase its pollution prevention activities so the industry can decrease its releases at a rate comparable to all other manufacturing. Improved spill and leak prevention and process modifications are just a couple of examples of actions that can help reduce the industry’s releases.

As seen in the graph below, the meats and grain/oilseed milling facilities have contributed the largest amount of releases among the food manufacturing subsectors. By implementing pollution prevention, these two subsectors could reduce releases and possibly save money as well.

For example, some slaughtering facilities have improved their wastewater treatment plants in order to separate solids and process them into rendered products, while other facilities simply have modified their equipment in order to reduce releases. 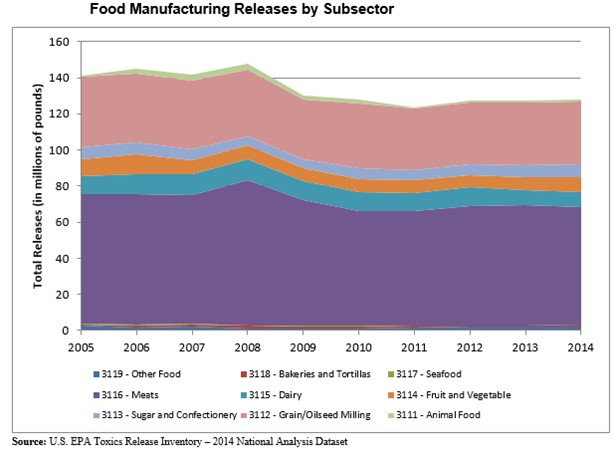 4. Majority of releases are nitrate compounds, n-hexane and ammonia 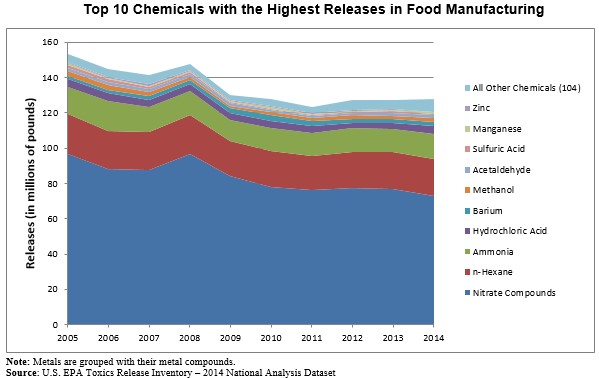 Ammonia is primarily found in the meat industry and released in the air and comes from sanitation practices. The current rate of releases has remained relatively steady over time, but the amount of releases of those main chemicals is high. The only exception is nitrate compounds, the release of which has decreased 16 percent over this time period.

Companies in these subsectors should look for pollution prevention solutions pertaining to these main chemicals so that they can reduce their most prevalent releases. For example, a company could switch to supercritical CO2 from n-hexane for oil production or install overflow alarms or automatic shutoff valves to prevent releases when ammonia levels get too high.

Other changes that companies can make include modifying the production schedule to minimize equipment and feedstock changeovers and increasing the amount of equipment monitoring.

5. Industry impact is primarily in the central U.S.

The graph below is divided into EPA regions. For the food manufacturing industry, the top three chemical releasing regions are EPA Region 4 in the Southeast, Region 5 in the Great Lakes states and Region 7 in the Midwest. The large number of facilities in these areas may be linked to the large number of farms also centered there. Thus, more chemicals are being released in certain parts of the country. There are opportunities to focus in on the central U.S. to curb future pollution. 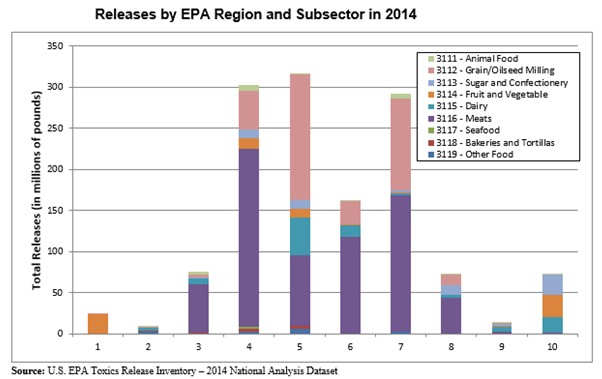 6. Industry is working to reduce releases

Many food manufacturing companies are working to reduce their releases of TRI reported chemicals. Ammonia, nitric acid and nitrate compounds are the chemicals with which companies are having the most success, as shown below. 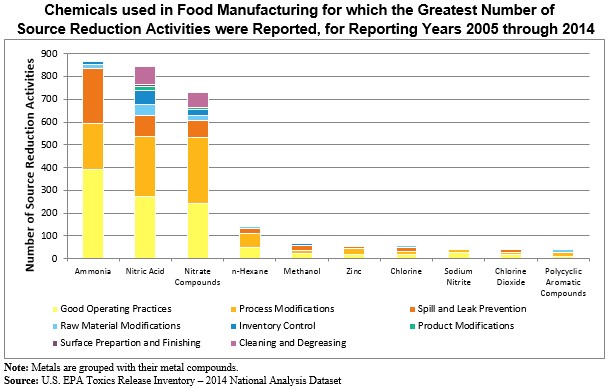 The TRI P2 tool can be used to identify pollution prevention methods and find similar techniques to implement. Changing the production schedule, improved maintenance and increased recordkeeping are common methods used to track and reduce releases of toxic chemicals that manufacturers could administer. Other resources for pollution prevention can be located through the Pollution Prevention Resource Exchange (P2Rx) centers.

How EPA and states can increase pollution prevention 'yield'

The food manufacturing sector has significant releases, as measured by TRI, but the data also show that the industry is working to institute source reduction activities. State pollution prevention programs, in partnership with EPA, can help industry identify the best practices and technologies and document those successes.

Armed with the most compelling and innovative approaches, states and EPA can work closely with industry to reduce regulatory pressures and save costs by implementing these measures as broadly as possible. We look forward to continuing a conversation with industry on how best to expand on current industry efforts. 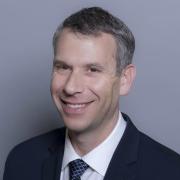 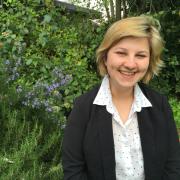 See all by Jeff Kohn