<p>Patagonia, Nike and Siemens also edge into the roster of the top 10 firms identified as green leaders in the latest GlobeScan and SustainAbility survey.</p>

Consumer products behemoth Unilever rode the top spot among corporate sustainability leaders for a second consecutive year, according to the latest survey of industry experts and professionals by research firm GlobeScan Incorporated and SustainAbility Ltd., a think tank and strategy consultancy.

Highlights of the survey results, which were released today in London, also show that the Patagonia outdoor clothing and gear company, Nike, Siemens, IBM and Nestle have edged into the list of leading firms: 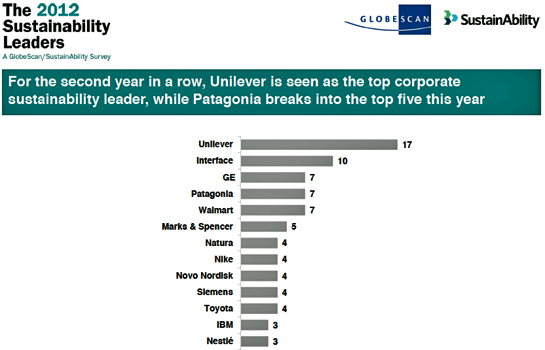 The list of companies that made the cut this year isn't markedly different from the roster for 2011, as a comparison of the leaderboards for the two years show: 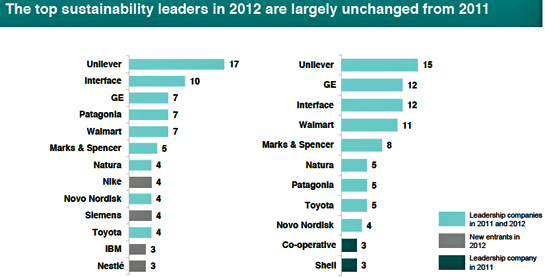 However, the 825 sustainability experts who responded to the survey this year have become more exacting in their view of what it takes to be a green leader.

With the exception of Unilever, all the companies that appeared on list in 2011 and 2012 saw a decline in their share of leadership recognition from the experts. That recognition is represented as percentage points in the charts based the experts' response to the question: What specific companies do you think are leaders in integrating sustainability into their business strategy?

SustainAbility Senior Vice President Jeff Erikson attributed the decline to "what's probably a bit of fatigue and frustration" among the experts regarding the overall progress of the sustainability movement.

So what will it take?

Conquering the short-termism that prevails in the business world, a regulatory or a bigger policy push and stronger efforts by more companies, he said. Of those three factors, action by companies holds the greatest promise, and in their report SustainAbility and GlobeScan offer their view of success criteria, which they call a "sustainability leadership triangle."

By following that principle, the research firms say, companies can better demonstrate that they are making strong attempts to address the sustainability agenda. The chart belows shows the value that experts place on demonstrated commitment to sustainability -- a quality that brought Unilever to the top of the list for two years in a row, Erikson pointed out. 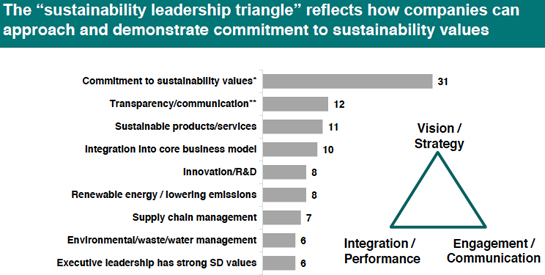 Highlights of the survey findings are available at www.sustainability.com/library/the-2012-sustainability-leaders

Photo of highlighting leadership via Shutterstock.com. Charts courtesy of SustainAbility and GlobeScan.