As an undergrad in the early 2010s, I found the perfect loophole to the legal drinking age: brewing my own beer. I started using the spent grain leftover from my homebrewing as an ingredient in bread, then I would sell these loaves and use the proceeds to buy the ingredients to make more beer. What I didn’t expect was that this hobby would lead to founding ReGrained, a sustainable food brand and pioneering the "edible upcycling" movement.

Upcycling is a zero-waste philosophy dedicated to creatively reusing byproducts, unlocking their highest value and improving the way we value resources. It goes beyond reuse to "best" use. Some products that can’t be recycled can be upcycled. For example, cigarette butts can be upcycled into building materials or decommissioned subway cars can be sunk into bodies of water and reused as reefs. "Edible upcycling" is a term I coined to apply this approach to food.

In the United States alone, ReFED estimates that 62.5 million tons of food are lost annually, the equivalent of 28 percent of agricultural land, and accounts for roughly 8 percent of total greenhouse gas emissions. Put in other terms, if food waste were measured as a country, it would be the third worst greenhouse gas offender after the U.S. and China.

Upcycling elevates food to higher uses, avoiding waste, and has tangible benefits to the environment and society. That said, it could be argued that food upcycling is traditional wisdom with a trendy rebrand. Waste costs money, and it always has made both dollars and sense for food producers to do more with less. This is why we have broth (from bones), "baby" carrots (from full size carrots too ugly to sell as is), whey protein (cheese byproduct) and less savory examples such as hot dogs (from everything but the squeal).

It could be argued that food upcycling is traditional wisdom with a trendy rebrand.

Somewhere along the way though, the system got inverted. Instead of canning tomatoes to preserve their shelf-life, we started growing tomatoes specifically for the purpose of canning. Now there are dairy processors whose primary product is protein powder, and byproduct is cheese.

If you ask me, it’s not the tactics, but rather the philosophy that makes upcycling a relevant and compelling movement. When done authentically, upcycling is environmentalism that happens to be profitable. Profit is the means, and protecting our planet’s precious resources is the end.

With this in mind, we’ve made it our mission at ReGrained to champion upcycled food as a paragon for sustainable consumption. We helped found the new nonprofit Upcycled Food Association, a climate-conscious trade organization that aims to support the development of upcycled food markets and a more sustainable food system. The upcycled food industry was valued at a $46.7 billion prize, an impressive sum considering its nascency, but one we would argue is underestimated based on the hundreds of billions of pounds of available food supply.

To the brewers, their byproduct is considered "spent" because it can’t be used to make more beer. But I saw it as a resource created from brewing, given that the process removes the sugar from the soaked grains and concentrates dietary fiber, protein, prebiotics, magnesium, iron and zinc. Plus the flavor was great.

Breweries generate tons of this grain every batch (about one pound per six-pack), but they don’t have great options for offloading it beyond animal feed. Additionally, 90 percent of the water footprint of beer is in the grain supply chain and each pound of malt uses more than 300 gallons of water — the equivalent to a two-hour shower.

While there is a real opportunity to use the spent grain for new product, we found that processing it safely and efficiently into a flour-like ingredient was a challenge. The material is 80 to 90 percent water by weight, rendering it difficult to transport and energy intensive to stabilize. We partnered with the USDA under a Collaborative Research and Development Agreement, and ultimately patented our invention. We sell this flour to other companies and also use it in our own line of branded products, including puffed chips and nutrition bars. Along the way, we’ve also helped further the development of compostable single-use packaging.

Today, ReGrained is not the only company in the upcycled foods market.

Barnana makes snacks from cosmetically imperfect bananas and plantains. Renewal Mill makes cookies and flour from okara, tofu production’s byproduct, and Toast Ale brews beer from surplus bread. In other words, what began as an underage experiment in recreational entrepreneurship has bloomed beautifully into a food movement.

Aspiring food upcyclers should question what is currently being left off the table by existing manufacturing processes. Flavor, nutrition, and function are all key considerations to successfully upcycle would-be waste into taste. When done well, we may realize our food system is more abundant than we imagined possible. 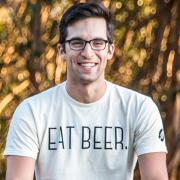 See all by Dan Kurzrock