UPS and other companies have big plans for the circular economy

There is a growing awareness in the business community that the circular economy is not only here to stay, but will continue to gain traction in the coming years, according to new research by GreenBiz and UPS. But the need for a defensible business case is the biggest barrier standing in the way.

The report, "The Growth of the Circular Economy," surveyed members of the GreenBiz Intelligence Panel to gain a greater understanding of key aspects and concepts associated with the circular economy and to identify trends that will help define success for this developing system of commerce.

For the uninitiated, the circular economy is an alternative to the traditional cradle-to-grave, "take-make-waste" model. In a circular model, resources are kept in use for as long as possible, with the maximum value extracted while in use, then they are recovered at the end of product life and used as materials for the next generation of products. 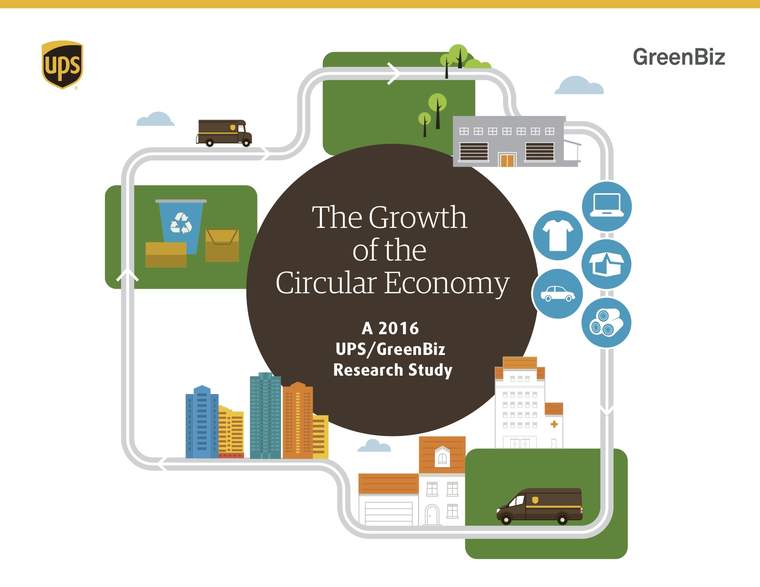 Population growth, resource scarcity, climate change impacts and an array of regulations addressing issues from toxic substances to zero-waste initiatives are placing pressure on companies to move away from an industrialized make-use-dispose economic model to a more circular strategy.

To be successful, this model requires a fundamental rethinking of products, materials and systems of commerce.

The concept of a circular economy is projected to continue to gain traction in the coming years, doubling in importance from two years ago, the survey found, with 47 percent of companies stating that circular economy principles were important to their organization, versus 86 percent who believe it will be important two years from now.

This suggests that the concept of a circular economy is expected to continue to gain traction in the coming years among sustainability-minded business leaders and decision-makers.

"This growth in importance suggests that companies are placing greater emphasis on taking a lifecycle approach to understanding the total impact of their products and operations across their entire value chain," Ed Rogers, senior director of Global Sustainability at UPS, told GreenBiz. "Macro global trends such as population growth, resource scarcity, climate change, impending regulation and zero-waste initiatives are likely driving this increased focus."

While 90 percent of the survey respondents felt they had a clear definition of the circular economy, only half (52 percent) easily could define the term and provide examples, and 38 percent said they know what the term means, but are not entirely certain what it encompasses. This disconnect between perception of understanding and actual knowledge about the circular economy could prove problematic if left unaddressed.

"The concept of a circular economy, while more known in European markets, has only started to gain traction in the U.S. over the past few years," Rogers said.

Much of what underlies the concept (of 'circular economy') — including the 'three Rs' activities of reduce, reuse and recycle — has been promoted for decades.

"However, much of what underlies the concept — including the ‘three Rs’ of reduce, reuse and recycle — has been promoted for decades and provides a foundation for this evolution in the design, production and reclamation of products."

In other words: the foundations of circular thinking already have been laid through decades of recycling efforts, which may indicate the knowledge gap may not be so difficult to close.

The business case is a big barrier and opportunity

While there is great promise in the fundamental principles of a circular economy and keeping resources and materials in play endlessly, the report said, principles alone won’t bring this concept to market, or to scale.

Some 38 percent of the survey respondents cited an insufficient business case as the largest barrier to the circular economy going mainstream. This was even greater in companies with revenues of more than $1 billion — 45 percent of those cited the need for a better business case.

"This isn’t surprising. There must be an attractive financial business case which fully accounts for cost and complexity of logistics, disassembly, repurposing and remanufacturing," Rogers said. "The financial benefits for supply chain players in a circular economy must be equal to or better than what is possible with the conventional model of ‘brand new; products being made to replace broken or obsolete items."

Other significant barriers included logistics costs (36 percent), other business objectives taking priority (30 percent) and the need for increased education efforts for both consumers and the C-suite (both at 36 percent).

UPS is one company that has managed to tackle these challenges head-on and integrate more circular economic principles into its business model.

"For UPS, the application of circular economy principles is different from companies that design and produce goods," Ed Rogers, senior director of Global Sustainability at UPS, told GreenBiz. "The role for UPS is to enable the circular economy through smart and more sustainable logistics, helping our customers reclaim or refurbish products and materials for subsequent use."

Companies are placing greater emphasis on taking a lifecycle approach to understanding the total impact of their products and operations across their entire value chain.

UPS provides logistics solutions for customers whose focus is on enabling the circular economy, such as TerraCycle, who reuse, upcycle and recycle waste instead of incinerating or sending to landfills. This moves waste from a linear system to a circular one, allowing it to keep cycling in the economy. TerraCycle offers free recycling programs around the world to help people collect and recycle hard-to-recycle waste — such as wine corks and juice boxes.

"In addition to enabling its customers’ participation in the circular economy, UPS also applies circular thinking within its own operations through the use of renewable natural gas (RNG), also known as biomethane," Rogers said. "By using RNG, UPS is taking methane that would otherwise be released into the atmosphere as a greenhouse gas and converting it into a fuel to power its trucks."

Nearly every landfill, agriculture operation, and manufacturing and waste plant generates methane — it is among the most abundant forms of fuel on the planet, Rogers said. To be converted into RNG, methane is captured from the landfill before it is released into the atmosphere, then purified, processed and distributed through the natural gas pipeline system, making it available for use in any vehicle that can run on natural gas.

"RNG provides a two-for-one solution to greenhouse gas emissions: it replaces conventional fuel and its carbon emissions that UPS would otherwise use, and also prevents methane from being released into the atmosphere, where it is more than 21 times more harmful than carbon dioxide," Rogers said.

TerraCycle, P&G partner in a love-hate relationship with trash