The new trucks, which use lithium ion batteries that recharge faster and last longer than previous generation HEV batteries, join 50 others that were sent earlier to Atlanta, Dallas, Phoenix and Houston.

Houston will get some of the 200 new trucks, so will Austin, Philadelphia, Chicago, Washington D.C., New York City, Minneapolis and Louisville.

The UPS HEV fleet has vehicles in two sizes from Freightliner Custom Chassis Corporation and features a hybrid drive system by Eaton Corporation. 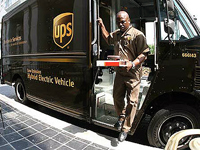 The new trucks look no different than others in the company fleet, but they run much more quietly than a standard package delivery truck and they use a lot less fuel. The 200 new additions to the fleet are expected to reduce fuel consumption by 176,000 gallons over the course of a year compared to an equivalent number of traditional diesel trucks. Use of the hybrids is also expected to prevent the emission of 1,786 metric tons of CO2 gases each year.

UPS added 245 compressed natural gas trucks to its green fleet in January and with the new HEVs will have more than 2,000 alternative fuel vehicles on the road. The UPS alternative fuel fleet has traveled more than 165 million miles since 2000.

In all, the company operates more than 20,000 low emission conventional and alternative fuel vehicles.