Urban resilience? There's an app for that

Informed by the academic discipline of ethnography and the gritty reality that life in the urban core is tough and short in resources, a slew of open data advocates, programmers and social scientists have built apps mapping opportunity in cities.

With names such as Streetwyze, Community Commons, Opportunity Score and DiversitydataKids, the apps not only use the vast sea of data available from city, state and federal governments, but some include local people’s knowledge of neighborhoods.

As cities strive to be more resilient amid the stresses of growing populations, climate change, pollution and affordability challenges, these apps are great tools for helping people find economic opportunities of jobs, good schools, public parks and housing.

They are significant enough that the White House earlier this month packaged them into a new initiative it calls the Opportunity Project, a trove of open data tools that promote economic mobility, including 12 apps developed in the private sector.

The White House chose apps created by big companies as well as non-profits, including Redfin, Esri and Zillow, whose Invest in the Future app maps out neighborhoods rated on opportunity in jobs and schools, affordability and development potential. The PolicyLink non-profit's app National Equity Atlas which maps healthy, opportunity-rich neighborhoods in 100 U.S. cities is part of it, as is Esri's ArcGIS mapping platform which now incorporates "opportunity" data.

Most of the 12 use government data in algorithms that help people find things. But in recognition that sometimes "bottom up" solutions are more powerful than "top down" ones, some chosen in the White House package include interactive features where local people add data about a neighborhood.

Streetwyze is a mobile mapping and SMS tool that integrates both official data and local knowledge that users upload or add while using it. 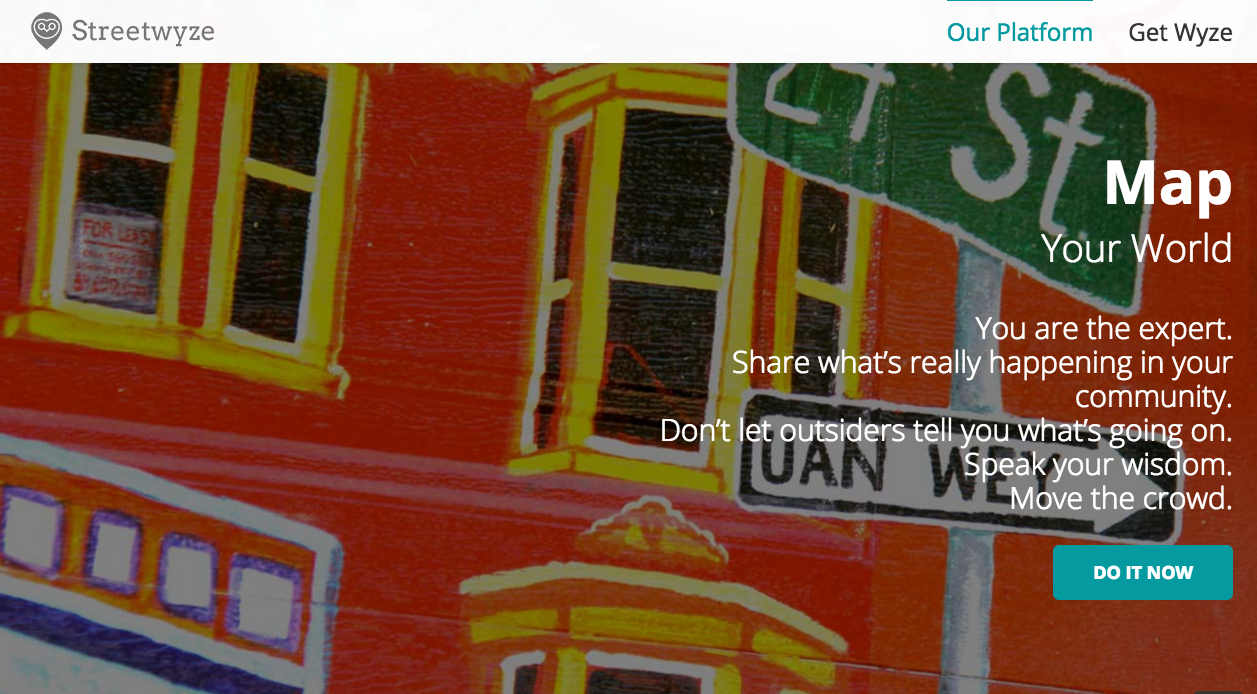 It was developed by Antwi Akom and Aekta Shah of the Institute for Economic, Educational and Environmental Design (I-SEEED). Akom is also associate professor of Africana studies and urban sociology at San Francisco State University where he specializes in climate justice, participatory technology, community-generated data and social innovation. Shah is a Ph.D. candidate at Stanford University in science and technology design.

In a long interview, Akom described the approach of his app as "people-powered place making."

"Streetwyze was designed to bridge the gap between ‘top down’ geospatial data and ‘bottom up’ local knowledge in order to elevate the community voice for the world’s most vulnerable populations," he said. "The missing link in the data revolution is how to integrate official knowledge and local knowledge in ways that make data more valid, reliable, authentic and meaningful to everyday people in order to get at the truth or ground-truth," information about a place.

"The two greatest challenges of our lifetime are climate change and income inequality. So most cities are grappling with this disconnect between this official knowledge of what the cities want to do as they grow and develop, and what everyday people want to do with things public space and landuse and transportation," he said. Streetwyze closes that gap to "facilitate two-way conversations between cities and communities, about how we can work together to improve the built environment."

How does it work? A great example of its power was displayed right here in Oakland, California. A map derived from county and city data of the city’s poorest neighborhood, East Oakland, would indicate grocery stores on many street corners based on business permits. That might suggest to those looking at a map that they can find food for the family dinner table at multiple locations in East Oakland.

"But the reality on the ground is that most of those are liquor stores and that neighborhood is actually a food desert," where shoppers would be hard-pressed to find fresh vegetables, Akom said.

Local residents can input into Streetwyze information on where, in fact, people can buy fresh vegetables — or which city parks are safe and have working swing sets, Akom said.

On a larger scale, Streetwyze can be used to assess people's needs in housing developments or health care settings.

If we really want to take human-centered design seriously and people-powered place-making, then we need platforms that put the power back in the hands of everyday people.

"If we really want to take human centered design seriously and people-powered place-making, then we need platforms that put the power back in the hands of everyday people and allow people to tell their stories and engage in community," Akom said.

The inspiration for Streetwyze, he said, grew out of the needs of every day people on the block, on the corner, walking down the street, biking through their neighborhoods, yet also has an intellectual genealogy and roots tied to academic disciplines like ethnography, urban planning, geospatial data,  and community-based participatory action research.
Akom said he was inspired by people "who have been locked out of sustainability conversations, smart cities conversations, shareable city conversations, and social justice conversations" as well as by academics and writers Elijah Anderson,  John Powell, Manuel Pastor, Rachel Morello-Frosch,  Jan Gehl, Jason Corburn, Majora Carter, Brett Cook, and the Nobel Peace Prize winner Wangari Maathai.
The Rockefeller Foundation's 100 Resilient Cities project has included Streetwyze in some of its work, Akom said.

The White House Opportunity Project's 12 apps also include some created by university teams. Brandeis University’s How Affordable is Opportunity app compares costs of transportation and housing in a neighborhood to the benefits it offers in education and health and differentiates those findings for children of different ethnicities. It is part of the university's Diversitydatakids.org project.