The U.S. Department of Energy has launched a cool roof initiative, and Energy Secretary Steven Chu is urging other government agencies to follow his department's lead.

"Cool roofs are one of the quickest and lowest cost ways we can reduce our global carbon emissions and begin the hard work of slowing climate change," Chu said in a statement this week.

"By demonstrating the benefits of cool roofs on our facilities, the federal government can lead the nation toward more sustainable building practices, while reducing the federal carbon footprint and saving money for taxpayers."

Cool roofs reflect sunlight and reduce heat gain, which decreases the need for air conditioning, saves energy and reduces carbon emissions. Cool roofs also reduce the heat island effect found in urban and campus settings where concentrations of black or dark roofs and paved surfaces create areas where the ambient air temperature is higher and the air quality is poorer. 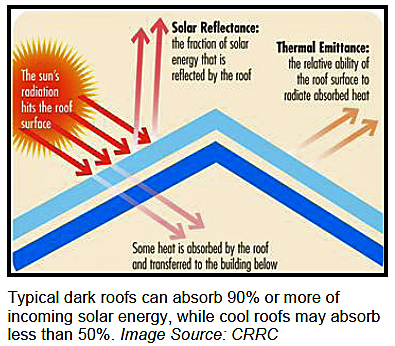 Chu has directed his department to install cool roofs when constructing new ones, or replacing old ones, as long as it is cost effective to do so given the life expectancy of the roof.

"Because cool roofs provide significant energy savings and environmental benefits, they should be used whenever practicable," Chu wrote in a memo (pdf) to leaders in his department in June regarding installation of cool roofs on DOE buildings. "Accordingly, effective immediately unless determined uneconomical by a lifecycle cost analysis, roof replacements and roofs for new construction shall be cool roofs."

This week, Chu detailed the DOE initiative, sent letters to the heads of other government departments and agencies and released the DOE Guidelines for Selecting Cool Roofs (pdf). The resource explains how cool roofs work, their benefits and how to select the right one for a facility.

President Barack Obama issued an executive order last fall that commits the federal government to sustainability and set targets for reducing fleet gasoline use, increasing water efficiency and recycling and creating net-zero energy buildings. Then in January, the president announced that the federal government will reduce its greenhouse gas emissions 28 percent by 2020. The cool roof initiative is part of the effort to reach that target.

The U.S. Department of Energy's National Nuclear Security Administration has a head start in the government's cool roof movement. The NNSA has installed more than 2 million square feet of energy efficient cool and white roofs at its facilities under its Roof Asset Management Program, which the NNSA launched in 2005.

The NNSA says it saves about $500,000 a year in energy costs as a result of  RAMP and expects to save more than $10 million over the next 15 years. On average, the installation of cool roofs and increased insulation has helped the agency cut its building heating and cooling costs by 70 percent annually. 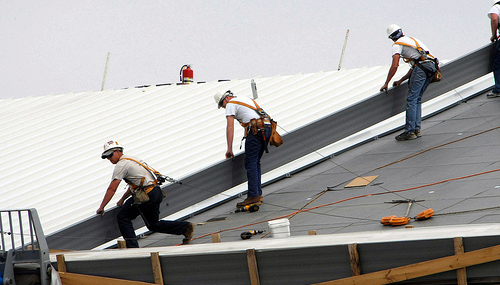 For example, at the NNSA's Pantex Plant in Amarillo, Texas, where nuclear weapons are assembled and disassembled, 337,000 square feet of cool roofs were installed in 2009 (pictured above). The change is saving the facility more than $63,000 a year in energy costs.

To support the case for cool roofs, Chu pointed to research by the Lawrence Berkeley National Laboratory. Using cool roofs and cool pavements in cities around the world would help reduce the need for air conditioning and potentially cancel the heating effect of as much as two years of worldwide carbon dioxide emissions, according to the study.