<p>In 2013, employment in solar grew at 10 times the rate of the national average, while fossil-fuel jobs declined.&nbsp;</p>

That's an increase of nearly 20 percent from 2012, says The Solar Foundation, which conducts the National Solar Jobs Census. With the addition of 23,682 solar jobs, employment grew 10 times the rate of the national average of just 1.9 percent.

During the same period, jobs in fossil fuels declined by 8.7 percent, shedding 8,500 positions, according to the Bureau of Labor Statistics. The solar industry now employs more than the coal and natural gas industries combined, according to the National Green Energy Council.

Over the past four years, the solar industry has added nearly 50,000 well-paying jobs, and 22,000 more are expected this year, too. The vast majority of solar jobs are in manufacturing and installation — 70 percent. 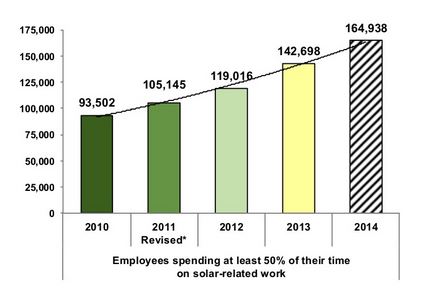 "The study shows both aggressive hiring and clear optimism among U.S. solar companies," said Philip Jordan, vice president at BW Research Partnership, a partner in the research. "Of particular interest are the continued high wages among solar installers, who earn an average of $20 to $23.63 per hour. We also found higher than average employment of veterans in the solar industry, a sign that their high-tech skills are valued in this sector."

"We've barely begun this transformation, but as it advances, the American solar industry has the potential to be one of the greatest job creators this country has ever seen," said Lyndon Rive, CEO of SolarCity, which created more than 2,000 jobs last year. He reminds us that when we "install solar panels, we create local jobs that can't be outsourced."

Competitor SunPower employs about 1,000 people in 10 states and is actively hiring hundreds more.

While high costs always have been the biggest problem for solar, that's also changing. Solar companies report that cost savings are driving clients' decision making. In fact, 51.4 percent say they are installing solar to save money, and 22.9 percent say they are doing so because costs are now competitive with utility rates.

Statistics on jobs across U.S. states will be released in February.

This story originally appeared at SustainableBusiness.com. Solar employee photo by worradirek via Shutterstock.