<p>The data center company has found a middle ground between custom-built data centers and outsourcing to the cloud -- and plans to get LEED Platinum certification in the process.</p>

One of my biggest takeaways from this year's Uptime Institute Symposium is the idea that the age of "snowflake" data centers is coming to an end.

Although some of this has been driven by large-scale migration to the cloud, the unfortunate five-day-long outage of Amazon Web Services in April has certainly put a damper on companies' willingness to leap headlong into cloud providers. (There is also no small amount of schadenfreude behind data center owner-operators' frequent mention of AWS' troubles....)

Between snowflakes and the cloud, there is a middle ground, and I got a chance to tour just such a thing yesterday. Vantage Data Centers in Santa Clara, has taken over an old Intel campus and is well underway in turning the 18-acre campus into a model of green and efficient data center operations. 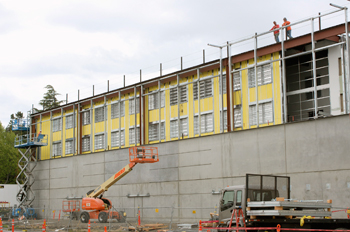 The company has one 61,000-square-foot compute center open for business already, commissioned at a PUE of about 1.3, and is in the process of building out two more (one is pictured at right). The data centers are shooting for LEED Platinum certification, and are being built from the ground up with green in mind -- what you might call a "green snowflake."

Vantage is interesting (in part) because they're taking a middle-ground approach: their data centers are neither cloud operations, nor are they colocation facilities with shared equipment. What Vantage is offering is a lease on highly efficient and scalable data center space that companies will fill with their own hardware and operate with their own staff.

The difference, according to Vantage vice president Patrick Davis, is that companies can save the significant expense of building and designing their own data center, while at the same time avoiding the operational risks from outsourcing their computing to the cloud.

And buying in to existing data centers means you can leave the design to people who live and breathe efficient compute facilities every day and focus on getting the most business value out of the data center.

"We focus on giving [our customers] better than they would do themselves," explained Jeff Rose, Vantage's chief strategist, during my tour of the company's facility. "Our minimum standards exceed what most companies' end goals are."

Having designed a data center campus that's as green as can be -- Davis said there are currently about seven LEED-Platinum data centers in the world -- Vantage works with its customers to plug their hardware into the system in ways to get the lowest PUE possible.

Davis said that part of the process of signing on new customers is an intensive discussion of how well the customer's original plans will play with Vantage's facilities -- and that all the companies they've worked with have made "big changes" to their plans after discussions with Vantage.

That customer service is a big selling point for Vantage -- and part of Jeff's job is to help customers get the most efficiency out of their raised-floor space. 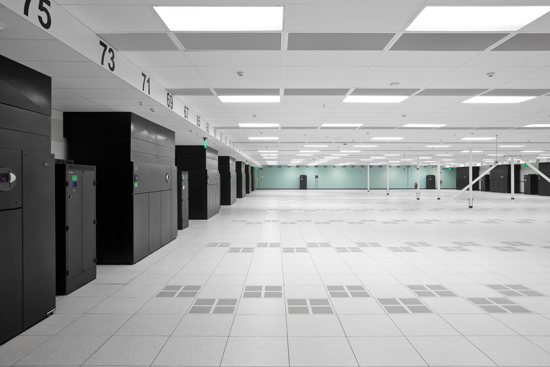 But beyond the idea of outfitting a deep-green and scalable data center, I expected to hear that making the sale for this middle-ground approach to data center operations would hit roadblocks in the C-Suite. How do IT managers convince the CFO that this is a smarter investment than putting servers in the cloud, or taking on one of the many containerized or modular solutions on the market?

It turns out that the biggest obstacles come not from the CFO as from the CIO or CTO, Davis said.

"We don't buy our offices -- why should we buy our data centers?" Davis asked rhetorically, illustrating the thinking that brings companies to Vantage's doorstep.

"We're giving them a reason not to build their own facility," he said.

Vantage has completed one of three buildings on its planned campus, and has built scalability into its designs. At full load, the campus can run at 34 megawatts of power, which Davis said gives customers two to three times the lifespan of a custom-built facility -- and that's a level of savings that any CFO can understand.

I'm working on a larger follow-up about Vantage's data centers and the larger idea of the future of corporate computing, but in the meantime, I'd love to know if (or how) you're outsourcing your IT needs -- is the cloud the solution for you, or is it an idea whose time has not yet come? Let me know by email or in the comments below.