<p>In this megacity, traffic jams can stretch for 60 miles. Smarter mobility is crucial to urban resilience, as well as shorter term planning for the 2014 World Cup.</p>

São Paulo is one of the best places to talk about mobility and sustainable cities -- two major topics for the GreenBiz VERGE conference last week. São Paulo is a chaotic metropolis of more than 11 million people, and getting around its 576 square miles is a complicated business. Subway lines are scarce, bus lines are badly planned, and with 500 new cars being licensed every day, traffic jams stretch 60 miles on weekdays.

All of this takes its toll on the environment. Most of Brazil’s greenhouse gas emissions come from slash-and-burn farming and cattle grazing in the Amazon. In the cities, however, where about 80 percent of Brazilians live, pollution comes from road traffic, the primary choice for transportation the past two decades. But this is starting to be deeply questioned.

Discussions about cities and mobility at VERGE took two directions -- in terms of looking at new technologies for vehicles, as well as debating the implementation of multi-modal urban transport and planning.

Saulo Nunes, real estate project director at the engineering and construction conglomerate Odebrecht, outlined a new mixed housing-commercial 275,000 square-foot project planned for the southern region of the city – just a few meters away from the VERGE event venue. One of its most important features is being 300 meters from a metropolitan train station. In addition, workspaces will be considered for the Aqua [Portuguese], LEED and Climate Positive green building certifications.

The project will house 25,000 people in two residential buildings, and 40,000 people who will work and shop there daily, said Nunes.

“Aside being close to the train station, the project will prioritize pedestrians and bikers, for whom we will build [14 square miles] of green area, bike lanes and pedestrian paths,” he said. According to city regulations, Odebrecht had to invest the same $114 million it spent to buy the land in certificates that will be used by the local government on infrastructure to reduce the traffic impacts in the area.

To improve further mobility for future workers and inhabitants, Saulo said that real-time weather, traffic and other information will be made available in public spaces and through applications in smartphones and tablets. 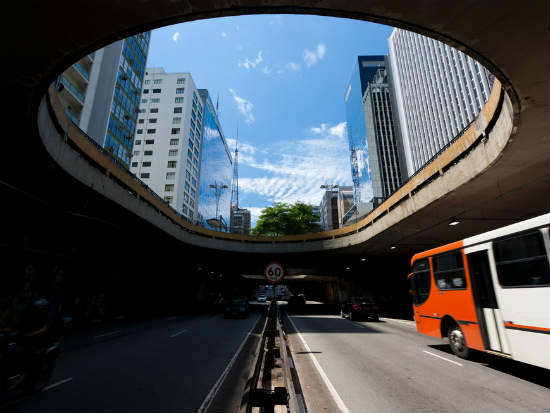 Mobility problems are huge in Brazilian cities, said Gracie Machado, commercial director at Schneider Electric. The company has been offering a solution for cities which involves real-time monitoring of traffic lights according to demand.

“Around the defined transit hubs in the city, the traffic lights will stay red or green according to amount of traffic. Priority is given to public transport,” she said. The system is already being implemented in the city of Belo Horizonte in central Brazil.

In São Paulo, however, the new city council that took power in January is giving priority to public transportation, said Vicente Petrocelli, planning and logistics manager at the municipality's traffic management department CET.

The city has added more than 162 miles of bus lanes since January, reaching over 186 miles, and should reach the end of 2014 with 249 more miles. According to Petrocelli, this has raised the average speed of city buses by 45 percent to just over 12 miles per hour from around 9 miles per hour previously. The idea is to motivate São Paulistas to leave their cars at home.

“There has been a change in behavior because we expect traffic jams to worsen, but they didn't,” he said. “But we don't yet know whether this is due to people opting for the bus or whether people are using their cars at different times.”

Still, no other improvements are in sight. Aside from the exclusive bus lanes, the city has few programs to continue to provide incentives to use public transportation. Petrocelli mentioned raising the circulation of private cars based on the numbers of their license plates, but any potential decision on making this a reality would depend upon a political decision by center-left mayor Fernando Haddad.

The other side of the mobility coin is that a diversity of vehicles need to be powered by a variety of fuels. Shell's chief scientist for mobility, Wolfgang Warnecke, seeks to understand how this will be rearranged. Selling the benefits of alternate fuels to city authorities and consumers alike is key.

“We will always run behind demand in energy,” Warnecke said. “But we need to understand that maybe for short hauls we will use electric cars in the future. For longer hauls we may require vehicles powered by biofuels or clean diesel or by even hydrogen fuel cells." 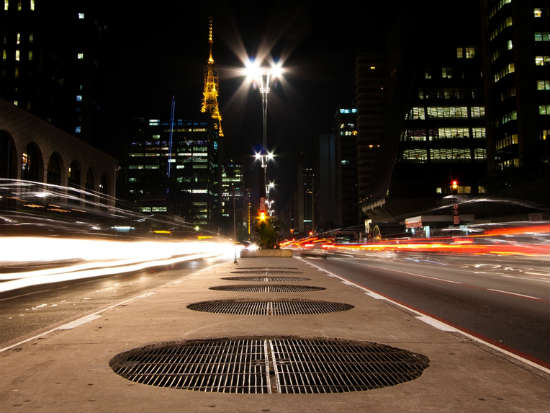 “In the city centers, we at Volvo expect to have 100 percent electric vehicles to avoid emissions and noise,” he said. “As we move away from the center, then we will see a mixture of different alternatives including buses running 100 percent on biodiesel or natural gas.”

Volvo is developing several technologies that include plug-in hybrids with a mix of electricity and clean diesel. The challenge is the need to develop greater battery autonomy, Amaral said. One solution proposed by Volvo is to install quick charging systems at the bus stops, which could increase battery time by 60 percent.

Yet hybrid trains that use electricity and biofuels or clean diesel are more probable, Mamud said. To increase efficiency, however, the idea is to use energy recuperation systems that can reuse the kinetic energy from movement when a vehicle brakes to charge up batteries, he said.

But whatever the solution for engines used in cities, integration with other modes of transportation is essential, and there needs to be more planning, Mamud said. In recent years, for example, Brazil has resuscitated its rail transport industry as city governments have invested heavily in metropolitan trains and subways to comply with the World Cup in 2014. But this rebirth of railroads in Brazil is facing problems.

“We currently have 70 people in GE dedicated to local projects, but we are finding hard to hire specialized people in this sector,” Mamud said. “That is why we are seeking partnerships with universities and schools to train people.”

As with other sectors, mobility in cities is changing rapidly as companies are adapting to to offer new solutions. Warnecke of Shell, for one, revealed that Shell now sells more natural gas than oil: “We will provide the fuel for the different vehicles that will be used in cities.”