LED-powered vertical farms will generate $6 billion by 2023 — and change the way Americans eat for the first time since WWII.

Vertical farming enterprises have faltered and a decade of low-interest rates has caused many industries to express frustration. However, although progress has been rocky, the ecosystem is fueling what may become an urban-food-system transformation.

As more people move to cities, urban farms now produce a fifth of the globe’s food. In the United States, urban farms are blossoming in Cleveland, Chicago and New York City. Currently, urban farms cannot meet local demand, so communities import from industrial producers depending on the season.

Vertical farming is one example of agtech. According to CB Insights, agtech companies around the world will disrupt how United States citizens eat for the first time since World War II.

LED-powered vertical farms are expected to generate over $6 billion by 2023, according to Acumen Research. World Economic Forum has predicted they will become very influential in agriculture by 2025.

The United States is experiencing epidemic levels of obesity, diabetes and heart disease. According to Harvard School of Public Health, this is due to nutrition-poor diets. One reason for this is the relative difficulty of easy access to supermarkets. The American Nutrition Association has published data showing how widespread these "food deserts" are in the United States. 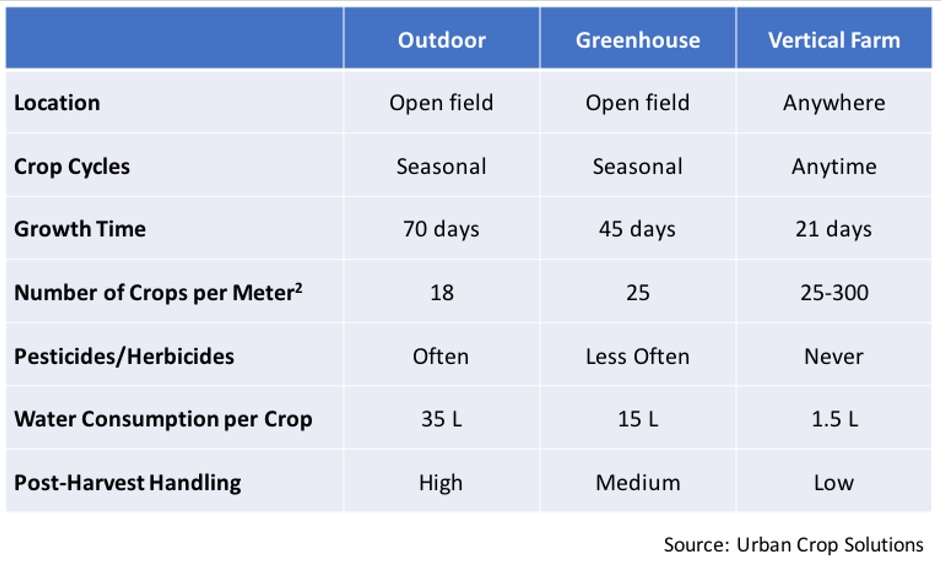 Vertical-farming technology will enable agriculture without soil or natural light and with much less water. Growing times and costs will fall and create opportunities for urban entrepreneurs to enable local, healthy food production year-round.

In addition to the runoff of toxins into our water supply, agricultural cultivation of our watersheds — such as reefs and marshes — degrades the natural infrastructure that purifies our drinking water and protects our homes against worsening floods.

As more people move to cities, urban farms now produce a fifth of the globe’s food.

At the same time, crops sometimes travel thousands of miles along a carbon-guzzling transport system that includes ground, air and sea (PDF). For example, imported garlic from China is estimated to cause 156 school absences a year due to pollution.

While the global trade of crops is a significant source of greenhouse-gas emissions (PDF), data published in Environmental Research Letters show that the environmental impact of producing food is highly dependent on its origin. Differences in farming practices, seasonal climate, and land and water availability mean that growing food locally is not always optimal.

Vertical farming is not a new concept. As discussed during Aglanta, several promising companies —including Atlanta’s Podponics, Vancouver’s LocalGarden and Chicago’s FarmedHere — shuttered due to lack of economic viability.

Critics also question the societal value of vertical farming. Salon and Fast Company have argued vertical farms are expensive to start and use a lot of energy. By extension, only wealthy entrepreneurs can start up operations and only a limited range of produce can be profitably grown. Therefore, vertical farming is accused of focusing on elite urban markets rather than malnourished and underemployed communities outside major metros.

Critics’ visions ignore the product life-cycle and creative destruction — the processes by which increased customer adaptation leads to lower prices. Investors, corporations and governments across the world are investing hundreds of millions into developing efficient vertical farming technologies.

As vertical-farming firms continue to compete and the industry matures, the price of upfront capital investments will fall. Likewise, improved efficiencies in lighting and cooling shrink operating expenses towards profitability. For these reasons, Panasonic and Phillips are decreasing farming expenses by mass-producing professional-level LEDs.

Environmental stewardship goes hand in hand with sustainable investment — a growing space favored by millennials, according to Morgan Stanley. Businesses facilitating vertical farming will not only grow with the industry but also gain as responsible investors migrate to investments such as green bonds. According to Crunchbase, vertical farming start-ups AeroFarms, Bowery Farming and Plenty have raised $35.3 million, $27.5 million and $200 million respectively in 2017.

Firms are using advances in technologies — including machine learning — and their own systems to differentiate themselves from the competition.

Ra also said technological improvements will enable vertical farming to grow a broader range of crops: "There has been no option other than to grow crops that can withstand travel, trucks, distribution centers and the required days and weeks of that supply chain. Because we provide plants with the exact air quality, temperature [and] light that they want, everything is simply better.”

Deloitte has calculated (PDF) that suppler vertical integration coupled with consumers’ expectations to consume products on demand will revolutionize the industry soon. By design, vertical farming relies less on established farming systems for inputs such as seed and pesticides.

However, Amazon’s acquisition of Whole Foods (PDF) does present opportunities for more informed crop growth and distribution. One can imagine a situation where Plenty — with Bezos Expeditions, the Amazon CEO’s personal venture fund, already an investor — might play a role in supplying on-demand, locally produced crops for sale in stores at Whole Foods and digitally on Amazon.

Improvements to the value chain

The promise of urban farming is spurring proposed regulation around the country to create tax-advantaged agricultural zones in Illinois and elsewhere and bolster the United States Department of Agriculture’s involvement in the area.

Moreover, advances in financial technologies will decrease the cost of working capital. Blockchain is especially well poised to enable urban farming growth. Blockchain’s near-instantaneous post-trade settlement removes the uncertainty of lags between trades and settlements that could take weeks. With this technology, farmers can analyze their commitments and make better-informed strategic decisions about growing and selling.

Whereas scale is required now to satisfy buyers’ needs, local agricultural futures exchanges would allow for a pool of diversified urban farms to independently sell to institutional buyers. With buying-commitments from grocers, schools or hospitals, farmers efficiently can forecast profit margins. Instead of searching for working capital and marketing crops, they can spend their time maximizing crop yields. 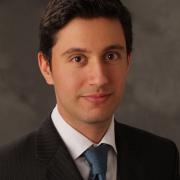 See all by Mark Perelman