Lauren Hepler
Tuesday, July 21, 2015 - 5:00am
In the last five years or so, an entire genre of writing about the aviation industry has developed around the potential of using greener fuels to help curb plane pollution.

From algae-based concoctions to blends with used cooking oil or the residue left over from forest fires, excitement about piloting widely varied biofuel feedstocks — or raw materials that can be converted into fuel, lowering carbon emissions by varying degrees — have prompted plenty of premature warnings to the aviation industry's incumbent petroleum fuel suppliers.

What's kept the aspirations of biofuel providers and airlines looking to cut emissions on the ground, however, is nagging uncertainty about the scalability of biofuel supply chains, regional variation in available feedstocks and (of course) cost concerns.

"There are two key issues," Jessica Kowal, Boeing's head of environmental policy communications, told GreenBiz. "We as an industry need to increase the supply, and we need to bring down the cost. It needs to be more affordable and available."

To that end, FedEx has become the latest corporate buyer to bet on aviation biofuels. On Tuesday, Colorado biofuel producer Red Rock Biofuels announced that the shipping giant has agreed to purchase 3 million gallons of low-carbon fuel per year.
The news comes after Red Rock announced last year that Southwest Airlines will procure another 3 million gallons of woody biomass-based fuel annually — and as other big names in the aviation space, like United Airlines, British Airways and Virgin Atlantic, refine their own approaches to biofuel innovation and emissions reduction.

It's also not just about airlines. Alt-fuel producers targeting other sectors of the transportation industry, like microorganism-to-fuel producer Joule's pursuit of the automotive market, illustrate how biofuels can be reformulated to serve customers in different markets.

One drawback is that the shades of green in the biofuel industry vary widely. Companies that rely on organic materials, like corn or wood, are often criticized for disrupting increasingly-strained food systems. Other feedstocks require large amounts of water for processing, and there's also the perennial challenge of transporting fuel to where it will be consumed without drastically increasing the product's carbon footprint.

"Carbon is continuing to a be a bigger and bigger issue," Kulesa told GreenBiz. "We equate it to the organic food industry and how that started. As more and more people got involved, they demanded that from their supply. We see the same thing with carbon."

In addition to FedEx, Southwest and plane manufacturers like Boeing, several other commercial airlines have also signaled renewed interest in biofuels and further trimming carbon emissions.

Overall, the Natural Resources Defence Council calculates (PDF) that as of January, more than three dozen commercial airlines have logged a combined 600,000 miles of flight time powered at least in part by biofuel.
By way of context, U.S. air carriers alone flew passengers more than 7 million miles during the period of May 2014-April 2015, illustrating that biofuels are still a very small piece of the pie. That figure doesn't factor in the commercial market for cargo transportation by plane, a la FedEx, or smaller private aircrafts.

The question now is whether the proportion of flights run at least in part on biofuels will start to tick upward with more big-name airlines investing hefty sums of money.

In recent weeks, United Airlines has announced that it is testing a biofuel blend made from farm waste and animal fats on a flight from Los Angeles to San Francisco. Perhaps as a sign of longer-term faith in expanded usage of the fuel source, the airline has also invested $30 million in the producer of the agricultural biofuel, Fulcrum BioEnergy — a provider that Hong Kong-based airline Cathay Pacific has also backed.
Britsh Airways, meanwhile, is a major investor in a plan by Washington, D.C.'s Solena Fuels to build a UK facility to convert 575,000 tons of municipal waste to jet fuel. In addition to contributing to construction costs, the airline has commited to buying jet fuel produced at the plant for more than a decade, valued at about $550 million based on fuel prices as of mid-2015.
On top of the airlines focusing on biofuel innovation, a few high profile commercial carriers are also starting to talk more frankly about the need to cut emissions in the sector.
Virgin Atlantic recently announced that it managed to cut carbon intensity by 2 percent while also increasing profitability — a decoupling of economic growth and environmental impacts that is increasingly being discussed across industries, which Virgin attributes largely to a recent $7 billion investment in more efficient aircrafts.

On the regulatory end of the fuel spectrum, Australian airline Qantas is also one of the major transportation fuel users advocating for clear carbon policies.
In a dedicated page on its website, the company notes the infeasibility of passing carbon taxes on to consumers and supports a plan to develop global aviation emissions standards by 2020.
As groups like the NRDC and industry association the Air Transport Action Group have noted (PDF), it would likely take a combination of biofuel breakthroughs, economic drivers like a carbon tax and more emphasis on increasing the efficiency of existing operations to move the needle on aviation emissions: 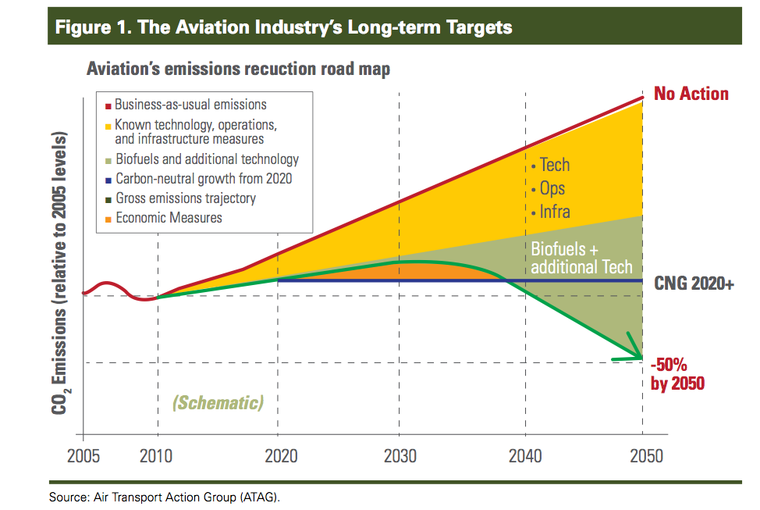 The quest for better biofuels

Though biofuels vary significantly in terms of environmental impacts once dispelled from an airliner — especially since they are still blended with regular petroleum to work in existing jet engines — the idea is that the entire lifecycle for biofuels is cleaner than oil.
Red Rock produces jet fuel by collecting forest waste and woody biomass recovered from sawmills, sending it through a gasifier, coverting the substance into a renewable synthetic oil and then refining it into a specific type of fuel. Once prepared, that biofuel will be shipped by rail to airports where it will be consumed.
Together, FedEx and Southwest will use all of the jet fuel that the company intends to produce at a new $200 million Oregon refinery expected to convert some 140,000 tons of forest residue into 15 million gallons of renewable fuel. Red Rock is still shopping for buyers for others types of fuel that will be produced as part of that total, including diesel and naphtha fuels.

Red Rock is hoping to begin delivering fuel to those buyers in 2017, by which point Kulesa hopes to catalyze further investment in the space. With more capital flowing into the high-overhead sector, he sees an opportunity to procure additional gasifiers or other carbon removal technologies.

"We need some winds out there — some projects that work," he said. “If you can get the first project financed, then you have a lot of avenues. The ultimate goal is to get really low-carbon fuel at the end of the day."

Boeing, meanwhile, has adopted the role of acting as a convener between biofuel providers, airlines and others with a vested interest in aviation fuels.

Focusing on the development of regional feedstock supply chains is one primary focus. The company is currently involved with biofuel operations using corn leaves and stalks in the midwest, gutter oil in China, sugar cane in Brazil and plants native to the deserts of the United Arab Emirates.
"You need a feedstock that’s available and climate appropriate," Kowal said, adding that site selection is also important. "You don’t need every airport. You get the biggest bang by creating the supply chain to the biggest airports."

In addition to concerns about the carbon impacts of each of those fuel variations — Boeing works with biofuels expected to reduce emissions by at least 50 percent — there are other potential pitfalls, like regional land use patterns or negative impacts on communities where feedstocks are sourced, that necessitate a localized approach.

"There’s a sort of batch beer approach," Kowal said. "You have individual projects."

Though it takes legwork to hone those batches, it beats the alternative of being left with fuels that are incompatible with existing planes, since expensive aircrafts take years to design and are often used by airlines for decades.

“When you use biofuel, it needs to be used in any airplane that takes off and lands," Kowal said.