The line between personal and professional lives is notoriously thin in Silicon Valley. That actually can be a positive when raising awareness for corporate sustainability initiatives, as software company VMware discovered during a three-month experimental water conservation campaign that ends in mid-December.

The effort, undertaken in collaboration with energy efficiency consulting company BKi, challenged VMware employees to extend the water reduction goals trumpeted in their office locations out into their communities, to their own homes.

So far, VMware is on track to save 13 million gallons within its facilities this year, according to Nicola Acutt, vice president of sustainability strategy and giving for VMware, based in Palo Alto, California. Irrigation water usage, for example, has been slashed by more than 50 percent through drought-tolerant "upgrades" to the company’s landscaping.

When California mandated stricter conservation measures last spring, VMware’s sustainability team realized many employees were struggling to figure out which water-saving measures might have the biggest impact at their individuals homes.

Priorities for the water utility covering Palo Alto, for example, aren’t necessarily the same for the organization that meters water in the neighboring communities of Mountain View or Menlo Park. The rebate for a drought-tolerant lawn in Palo Alto, for example, might be $6,500, while in Oakland, the payback is closer to $2,500. 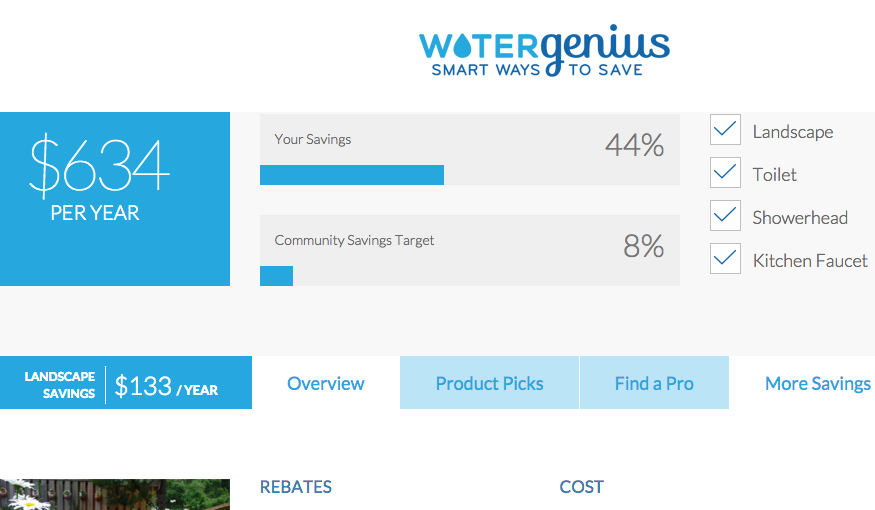 "It’s a very different economic discussion depending on where you are," said Brian Gitt, president and CEO of BKi. "Most homeowners don’t know which rebates are available to help."

BKi launched its WaterGenius app last summer to help California residents figure out what’s available. WaterGenius is  an online "gamification" platform that tracks an individual’s progress toward various goals and recognizes participants who reach them most quickly. The company approached two Silicon Valley software powerhouses, eBay and VMware, to test corporate applications for the tool with employees in Silicon Valley.

About 440 people (most of them with VMware) signed up between the two companies, with the goal of saving at least 1 million gallons outside their respective workplaces, according to BKi. The challenge was funded with a grant from the Santa Clara Valley Water District.

"We wanted to see if an element of gamification, of social and peer pressure, would help induce participation," Gitt said.

VMware’s Acutt said the challenge — which rewarded everything from showerhead swap outs to dishwasher replacements — encouraged employees to consider many of VMware’s corporate water-saving priorities within their own homes. Her group introduced the idea during a water-themed Friday afternoon social gathering. "The team had people lined up for more information," Acutt said.

One participant, VMware product line manager Justin Griffin, said he decided to sign up because he already was contemplating some changes to his landscaping and fixtures but found it difficult to research which approaches were best.

Although Griffin got a charge out of reading about progress by his co-workers, and seeing how he compared, he was motivated more by the potential to find monetary rebates and proven products for his projects.

"That drove a lot of decisions about the renovations I made. It also helped me find products that I’m happy with," Griffin said.

Gamification projects were all the rage four years ago as a method of improving employee engagement in very measurable ways. Timberland's "Serv-a-palooza Challenge," for example, raised more than $75,000 and logged 1,600-plus volunteer hours for the apparel company's various community and environmental causes. Similarly, Nissan uses a visual dashboard in its Leaf electric vehicles to display a driver's progress toward efficient driving behaviors.

As of late October, VMware’s employees drove more than 660,000 gallons in water savings through their actions, about two-thirds of the overall reductions inspired with the challenge.

For now at least, WaterGenius is only focused on specific San Francisco Bay area communities. When the service was launched in June, the company declared its intention to release mobile apps but so far, BKi hasn’t delivered on that plan. The company also has created a service called UtilityScore that helps California homeowners or house hunters get more detailed information about typical energy bills related to a specific piece of property.