Walmart, EDF and 3 reasons to think bigger on collaboration

I’ll be honest: We had pushback from some of our board members and colleagues in the environmental community when we decided 10 years ago to put a team of experts in Bentonville, Arkansas, home of Walmart’s headquarters.

Back then, Environmental Defense Fund was the only nonprofit willing to let the public know we were meeting with Walmart. The world’s largest private employer had its critics, and still does.

But we saw in Walmart incredible potential to drive sustainability, and were determined to make the most of the company’s rare convergence of market power and environmental ambition. We began a partnership that continues to bring outsized environmental results that extend far beyond a single company.

Last month, as I joined Walmart Chief Sustainability Officer Kathleen McLaughlin on stage at the GreenBiz16 conference in Phoenix, we talked about three pivotal themes that helped elevate this extraordinary partnership to heights neither side had imagined.

1. Big goals are key; we took risks to achieve them.

We wanted to help Walmart set big goals, especially when it came to addressing climate impacts.

When we first started, however, nobody knew quite how to meet those goals, so we tried lots of things. We experimented with temperature adjustments for storing ice cream, relabeled apparel to have it washed in cold water and encouraged Walmart to work with Unilever to sell water-efficient shower heads.

For retailers, when a carton of eggs contains even one damaged egg, the whole carton must be thrown out. That’s translates into 5 billion perfectly good eggs being tossed annually.

Our idea: Label individual eggs so that any damaged eggs could be replaced at the store. For Walmart, this would mean a daily saving of 1 million eggs, 10 billion gallons of water, 29 million gallons of fuel use and $50 million in costs.

We cut our losses — and pushed on.

2. The supply chain is where you reach scale

The size of Walmart’s operations was staggering, its influence in the retail industry was unmatched and its significant brand visibility all added up to extraordinary possibility.

We hoped Walmart could make its operations more efficient, and that it would set an ambitious greenhouse gas reduction goal.

What we hadn’t considered at the outset was the massive opportunity hiding in Walmart’s extensive supply chain. Importantly, 90 percent of Walmart’s environmental footprint is in the company’s supply chain.

The ripple effect of our partnership with Walmart has reached hundreds of influential brands … and millions of consumers.

Walmart gave us access to the inner workings of its business — to the staff and to the company’s data. In turn, we showed them the analysis and guideposts for the road ahead.

Together, we zeroed in on finding the biggest greenhouse gas hot spots in the chain — and that’s when we started to really create change at scale.

3. Opportunities multiply faster than you think

The ripple effect of our partnership with Walmart has reached hundreds of influential brands, hundreds of thousands of suppliers and millions of consumers.

Our work on Walmart’s chemicals policy catalyzed taking toxics out of more than 10,000 products. That action has shown other retailers and public policy makers that we can have safer lotions, cleaners, shampoos and other household products.

Now more than 80 percent of products on retail shelves are being evaluated.

What started as a partnership between two organizations became a collaborative effort among many. The results speak for themselves.

An approach that works

GreenBiz Chairman and Executive Editor Joel Makower asked McLaughlin why, with all the great non-profits that Walmart works with, has the partnership with EDF succeeded for so long?

She responded that our grounding in science, pragmatic approach and ability to speak the language of business was exactly what Walmart needed to move forward.

As Walmart solidifies its sustainability goals for the next 10 years, we’ll continue to look to science, pragmatism and proven market-based solutions to help Walmart match its new goals to the company’s scale and influence.

Most of all, we will continue to work together to find opportunities to further define what corporate leadership needs to be, now and in the future, so that we can assure that both business and the planet can thrive. 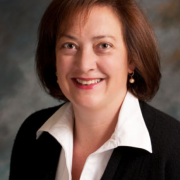 What the fourth industrial revolution means for sustainability

See all by Diane Regas